“We do hope that our viewers feel that we’re not done telling this story just yet,” says Daredevil co-showrunner Doug Petrie in a new THR interview. He was referring specifically to the Elektra story arc, but he very well could have been addressing the way the second season ends on a series of cliffhangers. Elektra is about to be resurrected by The Hand. The Punisher grabs an unexplained CD labeled “Micro” from his old home and walks off into the night. Matt tells Karen he’s Daredevil. Various questions remain frustratingly unanswered, left dangling to set up potential spin-offs, a still hypothetical third season (no official renewal yet) and/or The Defenders.

“We definitely crafted it with the goal of feeding into the larger Marvel TV Universe because they have such a specific plan of action for Marvel and Netflix,” says co-showrunner Marco Ramirez. “That was just our hope, to make sure that it worked as its own season of TV and also as fitting in to the larger world of all the other shows.”

I originally would have argued Ramirez and Petrie failed in their mission to create something which stands as “its own season of TV,” but when I think back on the season now I don’t harp so much on the ending. Instead, I marvel at John Bernthal’s “Penny and Dime” speech, and his rooftop debate with Daredevil in “New York’s Finest.” I remember the blast I had watching Elektra and Matt pull off a corporate heist, using his superhearing to track guard movements and see through cabinets and walls. I further appreciate the scenes with The New York Bulletin‘s editor in chief teaching Karen how to be a journalist. I tremble in fear of the now alarmingly dangerous Kingpin, and wish there had been even more of Karen and the Punisher. I smile over the way Claire always sounds so weary, but wise just as I smile when I remember this moment: 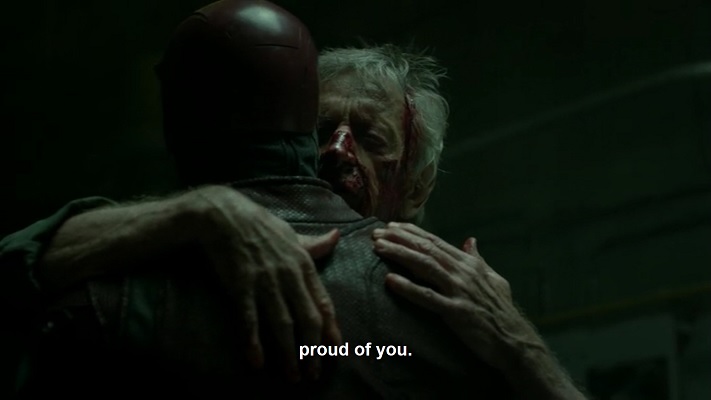 Hold on. Did I totally love season 2 and not realize it? Was it maybe even better than the first season?

That can’t be right. The first season had Wilson Fisk, Olympic-grade brooding, illuminating flashbacks, impressive fight sequences and an essentially simple story about two men disagreeing about the proper way to save the city they both love. It was an efficient season about a compellingly conflicted hero and a captivating villain.

Yeah, but the first season also frequently lost track of its supporting characters or had them off investigating questions we the audience already knew the answers to. I’m looking at you Foggy and Karen. The law firm of Nelson & Murdock ceased to really matter at some point along the way. It was all poorly paced and ran on for more episodes than it needed to. Then they completely fumbled the finale, and crucially failed to nail Matt’s Daredevil costume. That doesn’t mean the season didn’t still work as a particularly broody, street-level superhero origin story, but it wasn’t actually perfect.

Well, the second season also has Wilson Fisk. Granted, he’s only around for a couple of episodes, but they’re riveting, depicting his rise to power from within prison and offering a tantalizing hint of a rematch with Daredevil. There’s not quite as much brooding and definitely a bit more fun, thanks entirely to Elektra and her ability to inspire Matt to finally embrace how much he genuinely loves being Daredevil. The legendary continuous shot hallway fight scene was easily topped multiple times, first in a stairway and then in prison.

Plus, the second season solves the show’s issues with its supporting characters by transitioning Matt away from the Punisher arc and over to Elektra. Karen and Foggy are left behind to work the Punisher case, thus making them and the law firm of Nelson & Murdock integral to the plot. That means an end to episodes of Karen and Foggy doing nothing and wondering what Matt might be up to, and far less duplication of efforts where they’re investigating something Matt is already way ahead of them on as Daredevil. There’s still some of that. Karen, Frank and eventually Matt certainly overlap with their separate investigations of “Blacksmith.” But it’s nowhere near as prominent as it was last season.

Eventually, Karen and Foggy move on to doing their own separate things. She spins off into her own arc with the Punisher, and he begins to wonder if Nelson & Murdock is worth saving. Karen’s arc puts her in so many high risk situations she’s actually asked by their Detective ally in the finale, “Any shit storm you’re not a part of?” Crucially, she ended up in most of those shit storms independent of Daredevil, until the finale. She makes her own choices and embraces her passion for research and social justice. Similarly, Foggy comes into his own as a man and lawyer, realizing he doesn’t actually need Matt. They were each forced to stand on their own while Matt committed to being Daredevil, and they turned into more confident characters as a result. I could take or leave Karen’s romance with Matt, but I am fully on board with who she is on her own now.

This gradual splintering of the main characters, though, sometimes left me struggling to understand how everything connected, i.e., what Matt and Elektra’s Roxxon/Hand investigation had to do with the emerging Punisher conspiracy. Turns out, they don’t overlap at all other than thematically. Elektra tempts Matt to embrace a dark side while Karen strives to understand and potentially save Frank from his dark side, and both strands culminate with mentor confrontations, Matt/Elektra fighting over Stick and Frank killing “Mean” Clancy Brown.

This dual “A” plot structure at least prevented the season from ever dragging. It delivers a series of separate mini-arcs which reach a natural climax before transitioning to the next mini-arc. For example Frank’s arcs progress from “Why is he killing people?” to “Is he somehow sympathetic?” to “Who actually killed his family?” to “Is he too far gone to ever turn back?” It might ultimately end illogically and hold back certain story elements to the season’s overall detriment, but it’s a story which has a recognizable shape and leaves you wanting more as opposed to wishing it stopped several episodes ago. 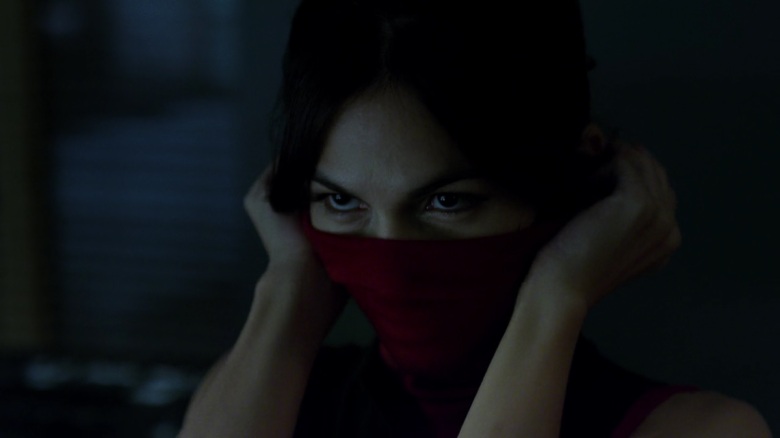 The bigger problem with the season is the Elektra arc. That has nothing to do with Elodie Young’s performance or her chemistry with Charlie Cox. It’s because of The Hand. Those ninjas felt like they came from a different show, and the supernatural leanings they brought with them started an Arrow-esque slippery slope Daredevil would be wise to avoid.

The Hand is made up of super ninjas who travel in big packs and get offed like the cheapest cannon fodder. The Hand is led by Nobu, the ninja who burned to death in season one. It’s a seemingly good idea, but the reality is that Nobu is nobody – he’s without personality or identity, and so The Hand become reduced to a faceless, pointless group of ninja. Their goals are confused – they want to awaken the Black Sky, which we discover is Elektra, but they’re also digging this deep pit for “The Rising,” which never becomes particularly immanentized. Without a charismatic lead villain and without a coherent endgame plan (what will even happen if the Black Sky is awakened? Super unclear) the final episodes get soggy and pointless.

That doesn’t mean the entire season was ruined, though, just the last couple of episodes.

The season ultimately fell victim to the obvious problem: how do you top Kingpin and his criminal empire? They didn’t. As antagonists go, D.A. Reyes was laughably ineffectual and thinly drawn. The Keyser Soze-esque bogeyman “Blacksmith” reached a predictable, but confusingly explained end. The Hand suck. They just do. And Nobu, as BMD perfectly put it, is a complete “nobody,” without background or clearly communicated goals for the future. As the final episodes sprint to the finish line, it’s only riveting for as long as you’re willing to commit to the emotional conclusion of Elektra and Matt’s arc together and keep willfully ignoring obvious questions over the specifics of Black Sky and The Hand’s plan.

However, along the way the season was consistently engaging, feverishly paced and touched on familiar, but well-told ethical debates while also progressing all of the characters. This was the season when Matt tried to run away from his life with the only woman who understands him, and the experience made more honest with himself and his friends. And he got to stand alongside John Bernthal’s Punisher and Elodie Young’s Elektra, who are now the definitive live action versions of those characters.

It’s easy to accuse Daredevil’s second season of succumbing to Iron Man 2 syndrome, too busy with setting up a wider universe to tell a complete story. Just as Kingpin promised Matt in prison, we end the season feeling the show is excitedly proclaiming “Just wait” for the really good stuff instead of confidently declaring “And that’s the end of this particular chapter of the Daredevil saga.” However, in many ways the entire season is an improvement on what came before, and for a show that spent an entire season building up to Matt finally obtaining his Daredevil costume maybe it shouldn’t be so surprising that season two stops short of telling the full Punisher and Elektra origin stories.

Favorite S2 Episodes “New York’s Finest,” “Regrets Only,” “Semper Fidelis,” “Seven Minutes in Heaven,” “The Dark at the End of the Tunnel”

Least Favorite S2 Episodes: “Dogs to a Gunfight,” “Kinbaku,” “The Man in the Box” (beyond Matt’s talks with Claire and Kingpin, that episode is overstuffed)

Hope Going Forward: Lighten up. No, literally. There’s mood lighting and night scenes, and then there’s the consistent annoyance of not being able to see what’s going on.

Fear Going Forward: The looming struggle to balance a gritty identity with more supernatural elements like a resurrected Elektra.

Biggest Questions: What happened in Kandahar? What was on that “Micro” CD? What are The Hand’s plans with Black Sky? How will Karen react to Matt’s confession? Can she or Foggy ever forgive him for being so selfish this season? Will Foggy be on Jessica Jones? What in the world will Matt do for money now? When will we see more of Stick with his boss? What will Elektra be like when she comes back?

More, Please: 100% that billy club. We barely glimpsed its awesomeness.

Most Unintentionally Funny Part of the Show: The knowledge that Hell’s Kitchen in the real world outside of the show is a relatively small stretch of “upscale restaurants, hoity toity bars, happening clubs, Starbucks locations and expensive brownstones.”