Coming to theatres the same summer as Thor, Captain America: The First Avenger felt like a cinematic-180. Sure, both films feature heroes who are set to come together in The Avengers (this film going so far as name check the upcoming film in its title), and both films have a romance at their center, but that’s about where the similarities end. Thor features a character who is literally a god. I mean, he has a magical hammer and everything. Captain America, by contrast, gives us Steve Rogers (Chris Evans, initially CGI’d onto a smaller, skinnier body to near-grotesque effect), a man so frail and sickly, he doesn’t qualify to join the army, much less a cadre of superheroes. 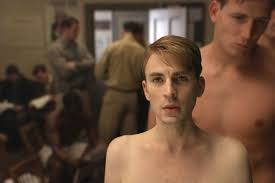 Of course, since we know the film is called Captain America and not Steve Rogers: The Avengers’ Towel Boy, we have a pretty good idea Steve won’t stay sickly for long. Thanks to a scientific advancement, he’s injected with a super serum and transforms into the Chris Evans we all know and love. Throw in an indestructible shield and the transformation is complete. He has a romance with British agent, Peggy Carter (a likable Haley Atwell), loses his best friend, Bucky Barnes (Sebastian Stan) during a mission, and fights Nazi scientist the Red Skull (a wasted Hugo Weaving). Red Skull has a Norse power cube or something, but it really doesn’t matter. You can almost hear the film shouting, “don’t worry about it. It will pay off later. We promise.”

I’m just going to throw this out there: I really like Captain America: The First Avenger. The film has the intelligence to realize the inherent absurdity of its grow your own superhero premise, but also takes itself seriously enough that an audience can emotionally connect with its main character. I love its gorgeous, sepia-toned cinematography that straight out tells you this is a film drenched in nostalgia, I like the central characters, and most importantly, I like Steve Rogers.  He’s almost the Marvel equivalent of Superman. I don’t mean that in terms of powers or abilities, as his powers are pretty unremarkable. He has heightened strength, but without his shield, he’s pretty killable. However, he and Superman share antiquated outlooks. They are products of their eras. Both characters, in contemporary society, feel like men out of time (and, of course, Captain America will become a man out of time at the film’s conclusion). They are unfailingly polite, un-ironically embrace the ideals of a bygone era and are such uniformly nice guys, they answer questions with “ma’am” and “sir.” Post-Tony Stark quipping, Rogers’ inability to be detached or insincere is refreshing. Captain America may be sometimes overshadowed by the larger personalities that surround him, but he’s probably the most endearing. He grounds the film in the real world, since only he seems to realize the actual cost of being a superhero.

He’s nearly impossible to dislike. It’s easy to sympathize with an individual unable to defend himself and appreciate the wish fulfillment that accompanies his transformation.

Connecting with Steve Rogers is critical to the film’s success, as it’s difficult to get much enjoyment out of the Red Skull. As a villain he’s fine, but for a man the Nazis deemed too extreme whose face is literally a red skull, he doesn’t make much of an impression.

What really stands out is Steve Roger’s narrative arc, and the adorably sincere way Chris Evans plays him. He begins as the guy who wants to serve his country, only to be repeatedly told he’s not healthy enough to join the army. He receives the opportunity to change himself into the ultimate soldier, and finds himself reduced to selling war bonds and serving as the propaganda representative of a hero rather than an actual hero. The montage of Captain America stage shows and comic books is as close as the film gets to a post-modern examination of the superhero in times of crisis, and they’re some of the film’s wittiest highlights.

He’s adored and seen as a symbol of hope, but he’d rather accomplish greatness than simply standby and watch others make sacrifices. It’s only when he’s confronted by actual soldiers who are immune to his propaganda position that he collides with reality, and throws himself into action. He’s out to prove to himself he’s more than just a mascot, and in doing so, creates his own destiny.

Future films will deal with Steve’s idealized preconceptions vs. the reality of his situation, but that disconnect is introduced here on a smaller scale. Once he’s finally allowed to be the super-soldier he always wanted to be, his heroism costs him his best friend, his romantic future, and trades the life he knew in the past for a completely foreign existence in the present day.

It’s hard not to feel some compassion for the guy who wanted to be a defender and lost everything in the process.

Really, though, what makes this film is the gleefulness of self-discovery missing from the fully-fledged Thor and the PTSD-inspired Iron Man. Captain America gives us a superhero who appreciates what he has become because he started from such a lowly position. There’s a joy here, despite the despair that lurks around the narrative’s fringes, that wins you over. The film zips along and reminds you how charmingly old-fashioned comic tales can be. It owes more of a debt to the Disney-led, failed franchise starter, The Rocketeer than it does to Iron Man. It’s almost a shame when Steve awakens in 2011 and not just because he lost his dance with Peggy.

The film doesn’t reinvent the comic book wheel, but it spins it in a pleasantly diverting manner.

Tomorrow, Julianne takes all her Marvel rewatches and combines them into The Avengers.