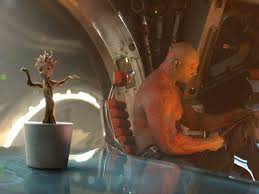 Taking on Guardians of the Galaxy after the motley crew that is every other film in the MCU, I couldn’t help but breathe a sigh of relief. I know this film, I love this film, and it requires almost no knowledge of the rest of the Marvel world. It’s fun not to hear the name “Iron Man,” “Captain America,” or “Hulk.” Granted Thanos (large, ineffectual, and last seen in an Avengers post-credits teaser) is back, but it doesn’t matter. This film almost serves as a launch of the MSCU (Marvel Space Cinematic Universe). As per usual, we have another MacGuffin (here, a blue stone that could destroy the world) and a scrappy group of defenders taking on a collective of bland, one-note villains. However, as with The Avengers, the devil is in the details, and like The Avengers, the film crackles with life because there is a distinctive personality with a clear vision of what the film should be. For all the film’s monotonous narrative turns, there’s enough quirk and weirdness lurking within the film’s skeletal structure.

To be fair, director James Gunn owes a massive debt to Avengers director, Joss Whedon, as star-based western, GotG could be called Firefly, and no one would have felt it was inappropriate. However, to call it a Whedon rip-off would sell Gunn short, as the film clearly relies on his own unique blend of violence and humor that made up much of his early career. Gunn began his career in the gleefully dreadful Troma films, before making his own tongue-in-cheek creature feature, Slither. He took what he learned in the world of horror sleaze and applied it to a big-budget superhero film. 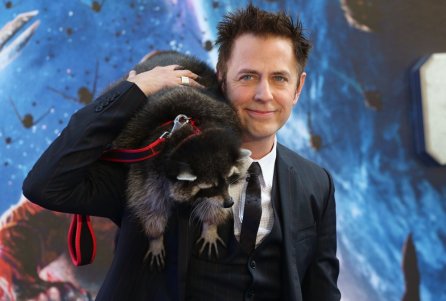 The film looks great, with its candy-colored planets and whizzing space ships, but that’s just the window dressing for his greater accomplishment: he gives us five entertaining characters and ensures the perfect actors appear on screen.

Our protagonists, such as they are, are scavenger Peter Quill aka Starlord (Chris Pratt), redeemed daughter of Thanos, Gamora (Zoe Saldana), talking tree, Groot (Vin Diesel), talking con artist raccoon, Rocket (Bradley Cooper), and combatant out for vengeance, Drax the Destroyer(Dave Bautista). The characters, and the actors paying them, are imbued with a nonchalant, “making this up as we go” vibe. The film has a scrappy, plucky charm that just wins you over through its sheer force of good will. There’s always the risk that when a film’s characters refuse to take a narrative seriously, the audience will follow suit, but GotG ratchets up the action and excitement when needed while never losing its humorous proclivities . The film is breezy and jocular, but Gunn keeps an emotional despair at each characters’ centers. After all, Peter and Gamara are kidnapped children, raised by monstrous father figures, Drax is trying to come to terms with his family’s destruction, and Rocket is a scientifically brutalized raccoon, aware of the horrors inflicted upon him. There’s a reason these characters lurk around the fringes of the bright, shiny planets that make up this particular galaxy: they laugh at danger, because tears lurk just beneath the surface. 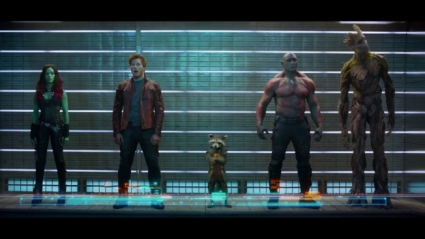 I’ll admit I approached this film in theatres with a certain bit of wariness. The trailer for the film seemed exhaustingly big, as though it was working so hard to be zany that flop-sweat was practically flying off the screen. Instead, Gunn has a light, playful touch that makes the film effortlessly watchable. The same weaknesses that plague so many of Marvel’s films remain present in GotG, as it portrays Thanos (Josh Brolin) as an easily bested nothing, too busy sitting on his throne to realize all of his minions are screwing him over with no repercussions.

The films other antagonists, Ronan and Nebula (Lee Pace and Karen Gillan, respectively), basically just exist to be threats. The film ends up wasting the naturally quirky, charismatic Pace and Gillan, and that is a shame. 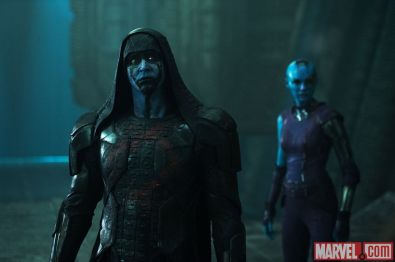 However, why complain about bland, mundane villains when your leads are so peculiar and charmingly idiosyncratic. The film turned Chris Pratt from sit-com star to comedic-action leading man. He’s handsome, charming, funny, and has a natural charisma that allows him to both remain affable when he’s making poor choices and ensure his transformation into more traditional protagonist is believable. Saldana remains a likable screen presence and Gamara’s strength and loyalty make her a character young girls should embrace as their cinematic role model. Bautista allows Drax and his inability to understand idioms to be a figure of amusement, while ensuring his emotional darkness remains palpable beneath his surface. Between Groot and the Iron Giant, it’s not difficult to feel Diesel may have missed his calling as a voice actor. He’s a figure that is both completely good-natured and achingly melancholic. Multiple emotions can be heard in each utterance of “I am Groot.” Cooper is able to make Rocket both a wise-cracking swindler and traumatized victim, and have both sides feel like they belong in the same talking raccoon.

That’s not a sentence I ever expected to write, and that pretty much sums up why Guardians of the Galaxy works so well. It’s so wonderfully eccentric and unexpected. There are so many reasons the film should fail, the fact that is soars is something of a miracle.

Next, Julianne takes on a talking, destructive robot in Avengers: Age of Ultron.