After 11 previous entries of big explosions, big fight scenes, and big speeches, it’s amusing to cap this rewatch with a character who prides himself on his ability to shrink. I could make jokes about this film being a Marvel drone, the film’s small-scale (See? This is going to be tough), or the irony of constructing a hero from a species that works in groups and doesn’t exactly pride itself on its individualism, but I don’t really want to. Ant-Man is goofy and absurd and a slight entry in the Marvel Cinematic Universe, but it’s also incredibly likable.

Until this recap, it was the only MCU film I hadn’t seen. I knew it had gotten decent reviews, but the trailers of a tiny Paul Rudd jumping around toy train sets and playing with his new pet ant looked too ridiculous to be enjoyable. The loss of director Edgar Wright over “creative differences” had already turned me against the film. Close-ups of creeping, crawling ants did little to assuage me. However, the film ultimately wins you over.

The film centers around ex-con Scott Lang (Paul Rudd), forced into a perpetual search for his next dead-end job and rooming with a fast-talking, former cellmate, Luis (Michael Peña). He’s a nice guy who loves his daughter (an adorable Abby Ryder Fortson), likes his ex-wife (Judy Greer, who deserves bigger, better roles), and despises her police officer fiance (Bobby Cannavale), who worries Lang will return to his life of crime and hurt his ex-wife and daughter all over again.

Ultimately, reclusive genius billionaire Hank Pym (a wonderfully bearded Michael Douglas) recruits him to steal back his shrinking suit from the company that wants to manufacture it into a weapon. Eventually, he dons the suit, learns to telepathically command an army of ants, and bonds with Pym’s estranged daughter and future Wasp, Hope (Evangeline Lilly).

The film’s as much an examination of two flawed, father-daughter relationships, as it is a superhero-caper hybrid.

I’d prefer if the film placed a bit more emphasis on the father-daughter relationships. After all, Hope seems completely screwed up because her parents were superheroes (and her mother died as a result, so there’s that), and that could result in Lang feeling some reluctance to engage in such behavior. However, the movie skims across the surface of its character drama, and revels in its charmingly low-stakes threat. There’s an intimate character-driven drama within this Marvel entry struggling to get out, and the film never entirely reconciles the two warring sides, but I appreciate the character drama the film does have. Even its villain, Darren Cross (Corey Stoll) seems less larger than life and more a smarmy boardroom member, at least until he transforms into the Yellowjacket.

But these quibbles are minor. The film’s too much fun to really pick apart. Even the ultimate threat is world-calamity free. It’s fitting that the climax takes place in a little girl’s bedroom. This is a film of refreshingly small peril, and the villain threatens these central characters, not society at large. The climactic battle between two miniaturized characters, with its fluctuations from their perspective and the normal-sized individuals around them allows the film to have a climactic fight scene while humorously undercutting it. To Lang and Cross it’s an epic beat-down; to everyone else it’s a minor scuffle between action figures. 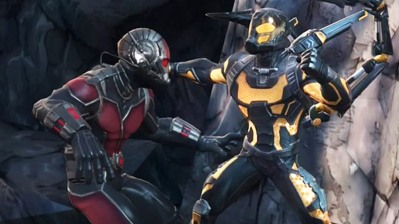 What makes the film work really comes down to its sense of humor, such as an action set piece taking place around a model train set, Luis’s excessively verbal recaps of mundane events, and Paul Rudd’s everyman reactions to the absurdity around him. I can see moments in which I imagine how much fun an inventive filmmaker such as Edgar Wright could have had with its loopy, toy-world visuals, but director Peyton Reed ensures the film’s action visuals never lose the underlying humor. Using carpets, bathtubs, and mice as obstacles allows the film to revel in its built-in absurdity, keeping the audience laughing with it rather than at it. Another film highlight involves the flashy, kinetic visuals that accompany Luis’s descriptions of commonplace conversations, treating exposition like an earth-shattering revelation. Ant-Man is zippy and skips along in its merry way, winning over audiences to its approach with each subsequent frame.

Paul Rudd remains one of the most inherently likable working actors. Whenever you see him, you’re almost instantly on his side. He’s a classically handsome everyman, but is believably able to play someone unaware of his own appeal. Rudd’s sense of comedic timing keeps the film light and bouncy and his winning nature (honestly, he’s an actor who seems incapable of being angry) put us on Scott Lang’s side instantly.

Douglas and Lily imbue their characters with a sense of fun, tinged with melancholy and regret at the state of their fractured relationship. Cannavale, Greer, and Fortson are likable enough characters that when the threat turns from Lang and Pym towards Lang’s estranged family, the stakes are emotionally involving. The fact that they are keeping that horrifying, dog-sized pet ant at the film’s conclusion probably nominates them for sainthood.

Charming is rarely a word that can be applied to film’s in the Marvel Cinematic Universe. It’s composed of films with too much spectacle and grandiosity for such a label, but Ant-Man functions as such a likable, enjoyable film that “charming” is completely appropriate. I’m trying to hold off on my “little hero that could” and “standing tall” metaphors here, but they kind of fit, nonetheless. The film may be as small and slight as its titular hero, yet it turns what could be a weakness into a strength. It’s breezy and entertaining when it should be unwatchable. It’s not the most climactic note upon which to end a rewatch, but it provided me a well-needed break from brain-numbing action.

Just to sum up, my Marvel preference countdown:

2) Guardians of the Galaxy