When I saw The Conjuring three years ago I wasn’t overly aware of the fact that I was watching a horror movie. Obviously, I knew it was a horror movie. It’s not like I walked in blind, completely unaware what kind of movie I was paying to see. Even if I had, all of the early jump scares would have been a pretty big hint. However, it never felt like a standard horror movie to me, at least not the ones populating the multiplexes these days. Instead, it recalled old-fashioned, classic haunted house movies, mixing together The Amityville Horror with Poltergeist before taking a hard turn into The Exorcist. More importantly, it was a character drama first, haunted house movie second, and the investment we had in the characters carried us through the ever-escalating paranormal activities.

By the end of The Conjuring 2, I was fully aware that I was watching a horror movie, albeit a well-executed one, and the turn left me a tad disappointed.

The Conjuring movies are about real-life demonologists Ed and Lorraine Warren, played by Patrick Wilson and Vera Farmiga Warrens, presented here as wholly good and caring people. Somewhere in the final act of Conjuring 2, Ed is turned into an idiotic action hero and the Warrens go up against an over-the-top foe with a vendetta. It’s not bad, per say; it’s just a tad generic, certainly beneath the rest of the film. In attempting to top the first Conjuring they concocted a final act which swerves just a little too far off the path into standard genre fare.

But I’m getting way ahead of myself. At the start of Conjuring 2, Ed and Lorraine have already moved on to the Amityville haunting in Long Island, as teased at the end of the last film. Since the Amityville case has been documented and disputed to death by this point, Conjuring 2 wisely offers but a mere glimpse of the Warrens’ experience in the house, reminding us of Lorraine’s powers of clairvoyance and establishing a demonic nun who will eventually factor heavily into their next case.

And that next case takes them to… 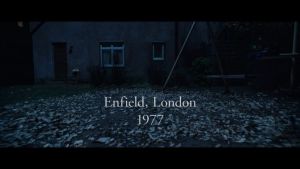 If you have a passing interest in the paranormal, “Enfield, London 1977” might be all the explanation you need. It’s one of the more famous haunted house stories in recent times, to the point that Sky TV just aired a Timothy Spall-starring mini-series about it last year. One of Conjuring 2’s producers admitted the case was “very Googleable.” To be honest, though, The Conjuring 2 is actually my first exposure to this infamous, but widely disputed poltergeist story.

The tale concerns a single mother named Peggy Hodgson (Frances O’Connor), her four children (two girls and two boys) and their modest North London home. The youngest of the bunch, Billy (Benjamin Haigh), speaks with a stutter, and the youngest of the two girls, Janet (Madison Wolfe, a Louisiana native who is fully convincing as a shy British tween), is desperate to look cool in front of her friends. The other two children, 13-year-old Margeret (Lauren Esposito) and 10-year-old Johnny (Patrick McAuley), register as believable kids, but your attention is naturally drawn to Billy and Janet as the two most vulnerable and thus most likely to be possessed.

The film gets there eventually, but it’s not exactly in a rush about it. We have to periodically cut back to the Warrens and chart Lorraine’s post-Amityville weariness as well as Ed’s anger at being continually called a fraud by academics on the talk show circuit. There has to be a scene or two exploring Peggy’s plight as a single mother, and observing her despair when old shit keeps breaking down in the house. Once the haunting finally commences it still takes a while before Ed and Lorraine are sucked into it.

This is roughly the same formula as the first Conjuring, and it’s a large reason why that film felt so character driven. In Conjuring 2, it again feels character-driven, but the combination of dual settings and characters whose narratives eventually intertwine feels a bit more disjointed as if the Warrens don’t truly belong in this story.

Arguably, the more interesting narrative is that of the two members of the British Society for Psychic Research (Maurice Grosse, played by Simon McBurne and Anita Gregory, played by Franka Potente) who work the case and deeply disagree over whether or not it is a hoax (maybe it’s the X-Files fan in me that’s drawn to that). However, since the Warrens do eventually factor into the story, as they did in real life at the very end, both Grosse and Gregory are underexplored and underexplained, and the Warrens are burdened with a hamfisted,  Jaws: The Revenge-esque linking mechanism to explain why we keep cutting to them.

So, the story construction is not quite as strong this time, but the paranormal moments are as masterful as ever, another case of James Wan showing everyone else how this should be done. Spoiler: the poltergeist ultimately fixates on Janet, not Billy, and an early sequence involving her barricading herself in her room showcases Wan’s brilliant use of sound design to maximize the psychological horror. As he told The Frame:

Just to give it a bit more context: That one moment is very important because I wanted to shoot the sequence where the little girl goes into the room … to barricade the door. Then, when she runs to the bed, the camera follows her and we stay on her. Off camera — we don’t see it — we hear something getting thumped and then we hear something getting dragged away. I think that is the kind of stuff that sends a chill down your spine because you’re not expecting that to happen. The fact that it all happened off camera and only using sound design, it just fires up your imagination even more as to what that could be. So much of all this is about building anticipation. For me, what usually makes a horror sequence scary is the journey not the destination.

Of course, the sound design must ultimately work in concert with the visuals, and for the latter, Wan recruited Don Burgess to serve as Conjuring 2‘s cinematographer. The Forrest Gump, Castaway, Contact and What Lies Beneath veteran’s mastery of shadows is on full display in one drawing room sequence which continually tricks the eye.

I could keep going. There’s a remarkably clever new horror spin on a situation you might recognize from E.T.. Our horror movie-trained expectations are repeatedly subverted (e.g., if you think someone’s about to be attacked think again about that seemingly safe other person across the room). Blurry background characters haunt us even more if they had been visible. Little Madison Wolfe is an absolute revelation as Janet, displaying a desperation beyond her years, and Wilson and Farmiga are again reliable as the Warrens, although did the first Conjuring work this hard to make them seem so saintlike?

It’s easily the scariest movie of the year.

Then there’s that final act where, sigh, some fairly stupid things happen. Characters oddly fail to ask the obvious questions. In construction, [major spoiler alert] it’s ultimately a repeat of the first film’s ending, just turned up to 11, and twisted to briefly nod toward the wide belief that Janet and her sister faked the whole thing. However, that sobering acknowledgment is followed-up by supernatural craziness which feels more in line with Wan’s other haunted house franchise, Insidious.  It’s still expertly made, but it’s not quite the payoff the rest of the film deserved.

The Conjuring was a fantastic character drama that also happened to feature remarkably tense haunted house movie moments and a riveting climactic exorcism. For the majority of its running time, The Conjuring 2 is more of the same, often a carbon copy in fact, but it eventually morphs into something a tad too generic. The last act lost me, but by that point I’d already jumped a couple of times and I’m not someone who normally jumps at horror movies. Bravo, Conjuring 2. You showed me some new tricks.

75% – “The Conjuring 2 can’t help but lose a bit of its predecessor’s chilly sting through familiarity, but what remains is still a superior ghost story told with spine-tingling skill.”

Here’s a profile of James Wan from the New York Times. Not that it’s a big deal for me or anything (except it totally is), but they actually linked to one of my articles.