New Line has been playing a risky game with The Curse of La Llorona, its new horror movie which pits Linda Cardellini’s 1970s social worker against a vengeful ghost who just really, really wants to drown her two kids. (Super weird that she doesn’t want her to do that.) For months, the studio – a subdivision of Warner Bros. – pushed its moody La Llorona trailers highlighting one of the film’s centerpiece scenes: ghost vs. car.

Or, more accurately, how can two kids trapped in a car fight off a ghost desperate to get inside with them? She has supernatural powers! Stop Llorona from slowly rolling down one car window and she’ll just move on to the next. Lock one door, she’ll unlock the next.

In the context of the actual film, this bit of tension-building is a masterfully put-together sequence. You can see why it was jammed into the trailers.

However, New Line had a trick up its sleeve. See, this La Llorona isn’t just a ghost movie – it’s the latest Conjuring spin-off! 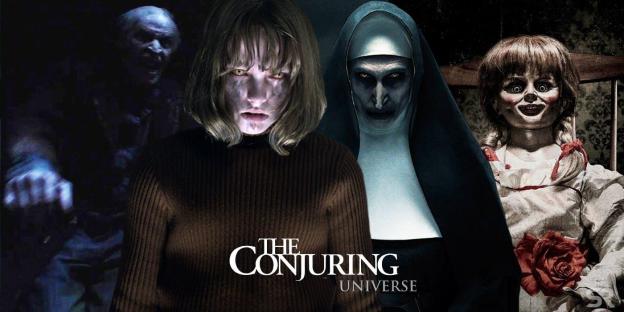 As revealed extremely late in the film’s marketing campaign, La Llorona technically takes place in The Conjuring Universe, just like Annabelle, Annabelle: Creation, and The Nun before it and Annabelle Comes Home after. This further bit of advertising enticement instantly appeals to completists as well as those who simply want to see how it all connects together. Moreover, Conjuring is a lucrative brand – over $1.5 billion in combined worldwide gross – which brings with it a certain guarantee of quality. For better (Annabelle: Creation) or worse (Annabelle), you generally know what you’re going to get from these spin-offs.

Given those mixed behind-the-scenes signals, it’s hardly surprising then that La Llorona feels like the least connected entry in this ever-growing Universe. Those desperate to learn how it all connects should free themselves from that distraction. Let me spoil it for you:

After Llorona sets her tear-stained sights on Cardellini’s kids, the terrified family rushes to the nearby church for shelter. There, they find a priest, Father Perez (Tony Amendola), who actually believes their crazy story of a ghost haunting. How could he not? He’s a character in the first Annabelle movie. After that experience, his eyes have been opened to the world’s larger, supernatural possibilities. However, after his little bit “I knew a crazy doll once” explicating he refers them to a risk-taking faith healer named Rafael Olvera (Raymond Cruz) and promptly exits the movie.

Absent that scene, La Llorona largely stands on its own as the latest film to tackle the Mexican folklore of the “Weeping Woman.” According to the legend, a woman in white drowned her two children in a fit of my-husband-is-cheating-on-me-so-now-I’ll-kill-his-kids revenge. Immediately afterward, she came to her senses and weeped uncontrollably. Thereafter, she became a bogeyman figure in the Latino community, a “you better behave or else La Llorona will get you” warning for parents to tell their kids.

The Curse of La Llorona honors this legend without really bringing anything new to it. 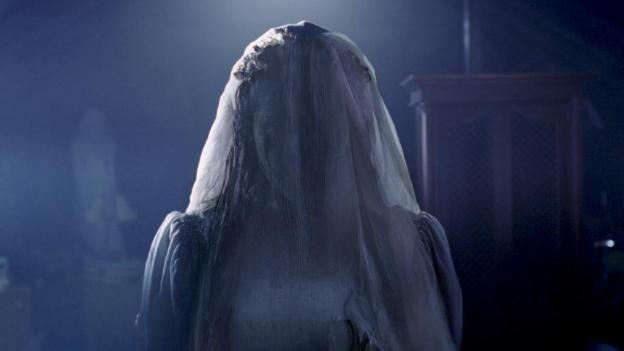 The plot: Cardellini – executing a home check as part of her job – encounters a mother who appears to have abused her children and locked them in a closet draped in ornate, religious imagery. In reality, the abuse was delivered by La Llorona and the deeply spiritual mother was simply hiding her children as best she could. When Cardellini frees the kids from the closet and delivers them into the foster care system, they soon end up dead, both drowned by La Llorona.

Worse yet, she’s put herself on La Llorona’s radar. Soon enough, her own children begin to hear and eventually see the weeping woman. As a recently widowed mother, Cardellini has no real backup in her fight against this new intruder – that is until she meets ex-priest Rafael. Thus, the stage is set for some familiar ghost vs. family and religious figure action.

Director Michael Chavez – making his feature-length debut – delivers this as a never-ending series of set up, jump scare, set up, jump scare sequences. Some of them are better than others. Moreover, the energy he brings to the film’s lively opening – a long-tracking-shot journey through Cardellini’s house followed by Edgar Wright-esque comedy through editing – disappears almost immediately. Instead, Chavez settles into more expected horror movie beats.

There’s enough good in there – as well as in the quality of the performances all around – to mark him as a director to watch. However, perhaps he could use a better script in his next outing. For example, SPOILER, in a brief scene near the end, La Llorona remembers her humanity. The script suddenly seems interested in digging deeper into the titular “weeping woman” who has long since passed into legend and haunted the dreams of countless children.

Just like that, though, the moment ends and Llorona reverts back to being a movie monster. For no more than a minute or two, she was something interesting. The rest of the time, she’s the ghost in an entertaining, but never all that amazing Conjuring Universe spin-off.

That makes The Curse of La Llorona recommendable for those just in it for some jump scares but slightly regrettable at the same time. Rather than advance the genre, La Llorona simply wants to be a scary ghost movie where the majority of the cast – other than Cardellini – happens to be Hispanic. There’s nothing really wrong with that. I just wish some of the scares had been better. Either way, it’s certainly more enjoyable if you let go of any hope that The Warrens might show up to save the day.

How would you rank them? Let me know in the comments.