There are currently more than 400 scripted shows on television right now on top of the seemingly countless older shows available through the various streaming services. In the face of such overwhelming choice, I have been mostly ignoring TV this summer (other than Netflix’s Stranger Things and BoJack Horseman and obviously Game of Thrones back in May) and opting for movies, but then Suicide Squad…well, it seriously broke me. Faced with a mess of such monumental proportions, I practically suffered an existential crisis (ComicBookGirl19 on YouTube can probably relate).

I turned to TV this weekend for assurance that there are actually good people delivering quality storytelling out there right now, working in environments where they don’t get notes like “That was great, but we really need this to be less smart because if its too language-dependent we might not make our money back overseas” (that’s a dig at idiotic film studio execs, not at foreign audiences).

Among the many things I watched was the pilot for BrainDead which I’d been ignoring mostly because it airs on CBS, home to the shows your parents and grandparents watch. I’ll acknowledge straight out that it’s more than a little silly for me to start writing about BrainDead’s pilot now. It’s already 7 episodes into its first season! Yeah, but I know more than a couple of people who have every episode of this show on their DVR and have yet to watch it because they’re waiting for that extra push.

Well, consider this your push. I watched the pilot (thanks, Amazon Prime!). It’s really good. Here’s my report:

THE CREATORS | Michelle & Robert King, the duo behind The Good Wife

THE SET-UP | “A government employee discovers that the cause of the tensions between the two political parties is a race of extraterrestrial insects eating the brains of the politicians.” – From IMDB

FIRST IMPRESSIONS OFF THE TOP OF MY HEAD:

BrainDead is really two different kinds of shows at once. On the one hand, it’s a slightly soapy peek behind the scenes of the movers and shakers in the federal government, specifically focusing on a young liberal (Winstead) who works for an ambitious, opportunistic politician (Pino) who just happens to be her brother and a young conservative (Tveit) who works for a Washington lifer (Shaloub).

Predictably, the young liberal and conservative seem to be set up as a potential star-crossed romance, although at the pilot stage any connection they make is still immediately punctured by their differing worldviews. They find themselves on Capital Hill at a time of political catastrophe with the Democrats and Republicans at each other’s throats.

I’ve seen this basic show before. It was called Party Animals, a BBC mini-series now most notable for starring a young, pre-Doctor Who Matt Smith. That’s not to say BrainDead is a carbon copy because it absolutely is not, and you could quickly jot down a list of all the ways it differs from Party Animals. However, as far as the political side of the show goes it has a familiar tone and feel, which is fine by me because I liked Party Animals. That would be enough to suck me in.

On other the other hand, there’s the Robert Heinlein/Invasion of the Body Snatchers-esque sci-fi portion where an outer-space artifact has unleashed an army of tiny, super tough bugs which appear to be taking over people’s bodies. The show plays this both with a straight face and for laughs.

For example, Winstead investigates the case of a soldier who reportedly came back wrong, and on every stop of her investigation she is greeted with oddly menacing stares from strangers, all looking at her in unison as if part of a hive mind. Furthermore, there is an effectively disturbing scene of a wife behind held down by her infected husband long enough for the bugs to infect her as well.

But it’s also funny at times in an absurd, quirky kind of way. Those who are infected all listen to same exact Cars song over and over again. Somebody’s head explodes right in Winstead’s face in gloriously splatter-gore fashion, and it is referred to as a punchline in the next scene.

The combination of these two different types of shows, a soapy political drama and an intriguing, but amusing sci-fi body snatcher thriller, is unique enough and well-performed by all. Whether or not this can really be stretched out over 13 episodes is the bigger question, and while charming at this early stage the show’s own amusement with itself (the episode titles all mimic the high-falutin titles of academic papers, the second episode actually starts with a quirky folk song re-cap of the pilot) might become too precious over time. For now, though, bring it on.

WATCH OR NOT | A definite WATCH. In fact, this one gets the Predator meme salute: 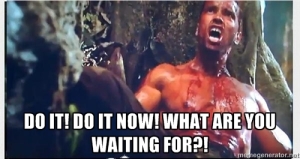