That’s what one insider told THR about Suicide Squad on the eve of its premiere, and three weeks later Squad now sits at $577m worldwide.

Um…is that good? Bad? Somehow neither good nor bad? Give me some answers here, man. I need to know whether Squad is a financial success or failure so that I might better modulate my outrage over what a dumpster fire it is as a film*

*The opinion expressed above is by no means universal since one quick visit to Letterboxd reveals just how many people openly acknowledge Squad‘s failures as a film but just don’t care because they had so much fun watching it.

Well, as a point of comparison Squad‘s three-week worldwide total is better than Man of Steel‘s (which was just a tad above $500m) but over $200m behind Batman v Superman‘s ($783.4m).

Yeah, but none of those films came out at exactly the same time of the year and in every single country at the same exact time. Plus, Batman v Superman and Man of Steel had China; Suicide Squad doesn’t. As such, there are a lot of differing variables at play which makes head-to-head comparisons inherently imperfect.

So, of course, I decided to make a bunch of head-to-head comparisons. Hey, everything about box office reporting is imperfect (e.g., we never know the marketing costs, ancillary profits from home video/cable, talent participation cuts, etc.). Just go with it.

The story thus far with the DCEU is not necessarily how much the films make but how quickly they fall. Man of Steel‘s weekly declines in 2013 already triggered some alarm bells, but this year BvS and Suicide Squad somewhat stunningly joined the ranks of Ang Lee’s Hulk, Elektra, Fantastic Four, Jonah Hex, Origins: Wolverine and Watchmen for all-time biggest second-weekend drops for superhero movies.  The third weekend declines weren’t much better, with Squad continuing to display a word-of-mouth which is just a tad better than Batman v Superman’s and t a tad worse than Man of Steel’s. 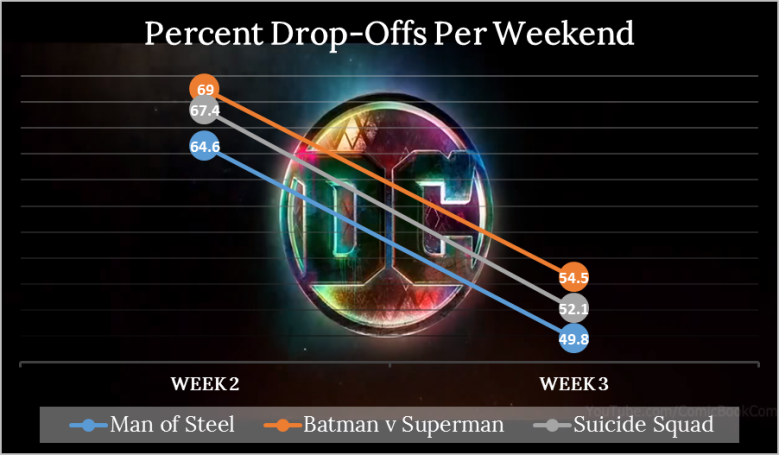 At the time of this writing, Squad‘s most up-to-date international numbers are in the UK, South Korea, Australia, Mexico, Italy and 20 or so other countries. However, I picked those first five because they rank as the second, fifth, eighth, ninth and eleventh biggest international box office markets according to the MPAA. When Squad‘s totals are compared to the other DCEU entries in those markets you see little separation between the three in South Korea and Australia but $8m-$9m-sized gaps in the UK and Mexico and a slightly smaller gap in Italy. 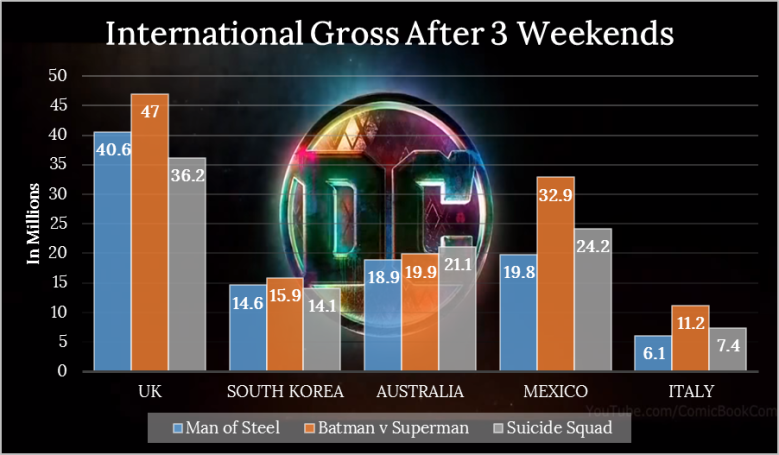 Of course, it shouldn’t matter that Squad is trailing BvS‘s pace in most major international markets (other than Australia, for some reason). After all, BvS was supposed to be the home run and Squad the change of pace double. Squad was never meant to be a film which needed to equal or beat BvS to be considered a success. However, when BvS turned into the most front-loaded blockbuster in history (the worst multiplier for any film to open with $100m or more) and the hype machine did its’ little dance for Squad we ended up here, where Squad was supposed to save the DCEU and then absolutely failed to do so.

VERSUS GUARDIANS OF THE GALAXY

It beat us first weekend. We almost made more money second weekend. And there is a very likely chance we’ll make more money at the end of the day (we made more domestically than BvS even).

He had to say something. Squad shattered Guardians‘ opening weekend record for August, and in so many ways Squad is WB’s transparent attempt to ride that Guardians wave, both in content and release window (they basically share the same release date, albeit separated by 2 years). However, Guardians was one of the leggiest superhero films of the past 20 years, and Squad will likely end up as one of the most front-loaded, just like BvS.

And if you look at the cumulative domestic 3-week gross totals for both films it would appear as if Squad is kicking Galaxy‘s ass. 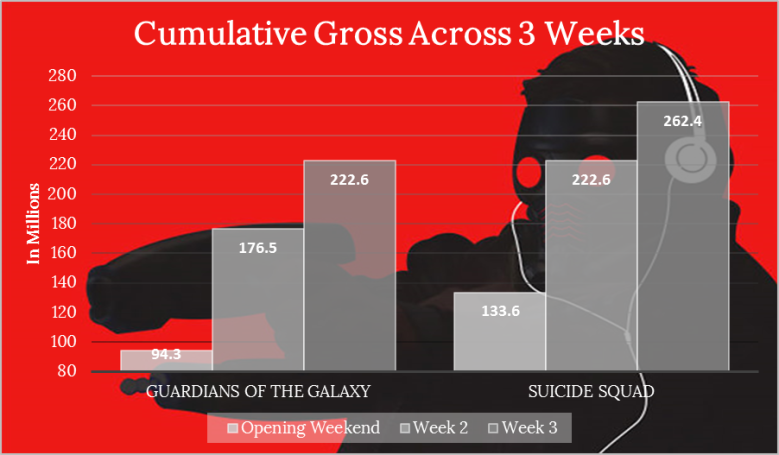 However, here’s the rest of Gunn’s quote:

The great thing about Guardians wasn’t that it came in and made a ton of money but that so many people went and told their friends about the movie, who went to see it, and that people kept coming back again and again. By the time we were in the later weeks, we were making more money than any comic book film EVER, which was such an amazing feeling for those of us who put our hearts into it.

Internationally, Squad is whooping up on Galaxy in every major market (well, the biggest ones with the most up-to-date data). After 3 weeks, Squad has already eclipsed Galaxy’s lifetime totals in South Korea, Mexico and Italy and is just shy of the mark in Mexico. Not so much in the UK, where Galaxy had a leggy run toward a final total of $47.3m.

Guardians ultimately topped out at $773m worldwide, which is right in the range THR indicated as being Squad‘s goal. Small problem: $96m of Guardians‘ $773m came from China. With Squad likely to fall short of Guardians domestically, can it really equal that worldwide total without China? It’ll have to keep beating Guardians in every other major international market, and even then that might not be enough.

Then again, the exact quote was ““The movie’s got to do $750 million, $800 million to break even. If they get anywhere close to that, they’ll consider it a win.” What exactly constitutes “close to that”? Because a worldwide total at least in the $650m-$700m range is pretty certain at this point.