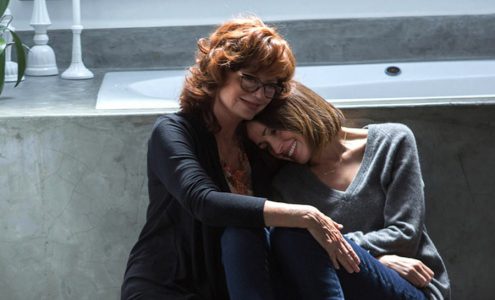 Here’s what I thought The Meddler was based on its title: Quirky mom quirks her way through life, regularly embarrasses her daughter by continually trying to set her up with any vaguely promising young guy she happens upon. It all amounts to a perfect showcase piece for an older actress in the central role, but little else, likely destined to someday be that mildly charming small film you find on Netflix one lazy Sunday afternoon.

Here’s what The Meddler actually is: A touching examination of grief and what happens to a mother and daughter who’ve grown up as best friends and don’t know how to function when the one true mature adult in the family, the husband/father, dies. It is indeed a showcase for a stellar central performance, but this performance is in service to a great film, not a merely mediocre one. The title is accurate. This is ultimately a film about a woman who can’t stop meddling in other people’s lives. However, The Meddler looks below the surface level of this common comedy trope and finds some surprising depth as well as some laughs.

It took me 5 months to find that out, though. The Meddler was in theaters all through April and May, yet I never made the time for it, turned off by the title and my related assumptions as well as half-read reviews which appeared to imply Susan Sarandon deserved a better script. If not for an odd confluence of events which saw two separate people highly recommend The Meddler, which is now available to rent, to me on consecutive days this weekend I’d likely still be in the dark about this. In fact, The Meddler joins the growing list of slice of life indies focused on the usually untold second acts of older women. Think Sally Field in Hello, My Name Is Doris, Lily Tomlin in Grandma and Blythe Danner in I’ll See You In My Dreams. The Meddler might be the best of the bunch.

The plot: After the death of her husband, Marnie Minervini (Sarandon) relocates from New Jersey to Los Angeles to be near her daughter Lori (Rose Byrne), a newly single screenwriter who isn’t exactly excited to have her smothering mother living so close and regularly dropping by unannounced. When Lori has to leave town to oversee a TV pilot based on one of her scripts, Marnie fills her time volunteering at a hospital and generally inserting herself into other people’s lives, be it someone she sorta knows (like Cecily Strong as one of Lori’s friends) or a practical stranger (like Jarrod Carmichael as an Apple Genius Bar employee in need of a ride to night school). Is she simply over-compensating for a heart broken by a lost spouse and ungrateful daughter who continually rejects her love? And what will she do when she meets a retired cop (J.K. Simmons) who has the irresistible charm of a California cowboy?

As you might guess anytime you see a film in which one of the characters is a screenwriters, yes, much of this is autobiographical. Correction: Almost all of it is. Double correction: Okay, this is borderline documentary territory.

“Lori” is just The Meddler‘s own writer-director Lorene Scafaria with a different name, and “Marnie” is based on Lorene’s mother, with Sarandon even borrowing from the real Marnie’s wardrobe. Just about every single thing the Sarandon Marnie does in the film, from moving to Los Angeles to be near her daughter to giving a relative stranger rides to night school, is rooted in something the real Marnie has actually done and would probably do again. The only 100% complete creation of the script is Marnie meeting her perfect man, which is sadly just a bit of wish-fulfillment on Lorene’s part, i.e., the type of thing she wishes could actually happen for her mom.

Scafaria, fresh off her disappointing directorial debut Seeking a Friend for the End of the World, didn’t come to this autobiographical approach easily. At one point, she toyed with putting Marnie into an escalating crime farce ala Woody Allen’s Manhattan Murder Mystery, but that quickly fell away. As she told IndieWire:

“I certainly wasn’t sure how personal I was going to get with it when I was writing it. I was excited about her character and what she was going through and her move to LA and being a fish out of water and all her quirky little things. But I really wasn’t sure how personal I was going to get. The more I wrote it, the more personal it got. It was cathartic to share it with her at the time. I think she was realizing things about herself and I was realizing things about myself. And I certainly meant for it to be kind of an apology, among other things [laughs].”

The film is the better for Scafaria’s emotional honesty as well as her restraint, particularly the way she focused her script entirely on Marnie and kept Lori on the periphery, the daughter’s absence forcing the mother to give her love to anyone who’ll take it even if that happens to be a sorta acquintance (Strong) whose name she can never remember. Moreover, Scafaria cleverly uses Marnie’s continued voice mail messages for her daughter as a stand-in for narration as well as continued glimpses into Marnie’s lovable optimism.

As expected, The Meddler is a showcase for a stellar central performance from Susan Sarandon, but it is also a touching examination of grief and what happens to a mother and daughter who’ve grown up as best friends and don’t know how to function when the one true mature adult in the family, the husband/father, dies. Of course, the somewhat schlocky title is accurate. This is ultimately a film about a woman who can’t stop meddling in other people’s lives. However, The Meddler looks below the surface level of this common comedy trope and finds some surprising depth as well as some laughs.