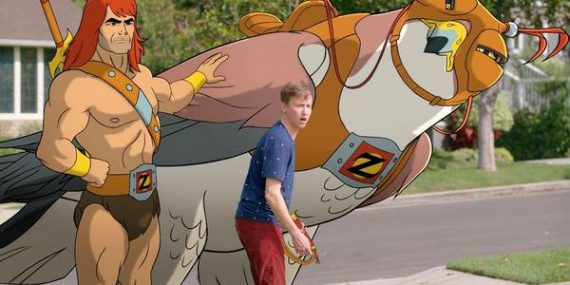 This is the state of network television in 2016: Fox just debuted a promising new sitcom (Son of Zorn) with a fun twist (live-action/animation hybrid) on a familiar formula (fish out of water comedy, divorced parents drama) and killer creative pedigree (produced by LEGO Movie and Last Man on Earth‘s Phil Lord and Christopher Miller). However, it’s not even the second or third craziest new broadcast show of the fall TV season to go the live-action/hybrid route (e.g., ABC has one about a talking pillow, another one about a talking dog), and the way Fox is promoting it, previewing the pilot this past Sunday two weeks before the show’s official debut, just feels confusing and desperate.

Meanwhile, while the networks all wildly jump and down like a kid screaming at a parent for attention cable networks and streamers continue to confidently roll out remarkably self-assured new shows with lower bars for success. As such, when I sampled recent cable offerings like FX’s Atlanta and Better Things I could appreciate the minimalist storytelling on display, happily following Donald Glover through the projects of Atlanta, Georgia in the former and laughing at Pamela Adlon’s scattershot account of her life as a single mother of three trying to make it in Hollywood in the latter. With Zorn, though, all I could think was “there’s no way this is going to last.”

To hang that on tired notions of the patience of cable outlets versus the risk-averse, happy trigger fingers of the broadcast execs might be a bit unfair. In recent years, the broadcast networks have shown more patience with new shows (such as Last Mand Standing), mostly because the entire entertainment industry seems to exist in its own upside down pocket universe now where nothing makes sense anymore and doggedly sticking with all of your old methods is a one-way ticket to losing your job. However, Fox has a long, long, loooong history of canceling shows too early. Moreover, as a regular TV viewer you can simply sense when certain shows have been misplaced, i.e., ended up on the wrong network.

Last year’s excellent Limitless, for example, had no business being on CBS, which had no idea what to do with an idiosyncratic procedural given to borderline Community-esque flights of creative fancy. Similarly, Son of Zorn is an Adult Swim show posing as a Fox sitcom. If limited to simple quarter-hour episodes and judged by a very low “Did it make enough stoners laugh at midnight? standard, this could be a long-running curiosity. Stuck on Fox, where it’s forced to come up with enough story to fill at least 13 half-hour episodes, Zorn might not make it.

Here’s the logline from THR:

Jason Sudeikis voices the title character in Son of Zorn, which follows a fish-out-of-water father who returns home after years away to reconnect with his ex-wife (Cheryl Hines) and son (Johnny Pemberton). Zorn is the Defender of Zephyria, an island in the Pacific Ocean where everything is animated (Lord and Miller compare it to Darfur: People “don’t really know anything about it but they act like they do”). Zorn finds himself adapting to suburban life in Orange County, settling down in an apartment, holding down a cubicle job for a no-nonsense boss (Artemis Pebdani) and even trying to get along with his ex-wife’s new fiancé (Tim Meadows).

Think of a family sitcom version of the “Where was Thor during Civil War?” mockumentary short video which made the rounds a couple of weeks ago, and then replace Thor with an animated He-Man knock off. That kind of gets you to Zorn:

In truth, Zorn is the product of a development deal Phil Lord and Christopher Miller signed with Fox, and the inspiration for the show didn’t even come from them; it came from a network exec who really liked Ted. Lord told THR:

On the first few months of this Fox deal, the guys [at the studio] there were really excited about doing a hybrid show. I think somebody there liked the idea of making a version of Ted but a TV show. So we thought about a hybrid-ized family and what it would be like if you were the son of somebody who was animated and what that might feel like, and then it started to feel like something worth doing. We started thinking about the worst possible dad you could have. How could he be as big a misfit as possible? So that was it, and we had great partners to make our crummy ideas actually decent.

And what they and Wilfred’s Reed Agnew and Eli Jorne came up with as co-creators elicits laughs fairly easily, tickled as I usually am by fish out of water humor centered around exaggerated depictions of masculinity. Hearing Jason Sudeikis casually offer his son the chance to drink out of the skulls of his victims, completely oblivious to the inherent horror of such an offer, is automatically funny to me just the same way Thor’s method of requesting a refill makes me laugh every time:

It’s not a perfect pilot, though. The animation, in particular, is a work in progress. Cheryl Hines first scene easily betrays the fact that she was either acting to nothing or to a 6’7″ stand-in. But as pilots go it’s good enough. However, it feels like a show which was ordered to series to both maintain a good working relationship with Lord/Miller and because somebody somewhere thought, “Well, this is strange enough that it will at least get some attention.” Nobody, however, seems to have asked, “Yeah, but is there really a series in this? Or will this simply be the same ‘Zorn just doesn’t understand’ joke over and over again?” Granted, I have a soft spot for that kind of humor and will probably keep watching, but I have this nagging sense that it will be a waste of time because there’s no way this show will actually last.

What do you think? If you haven’t seen the pilot yet, it’s up on Hulu, which is where I saw it. Moreover, the show officially premieres September 25th.