Last weekend at Wizard World in Tulsa, Oklahoma there was a special panel called “The State of Star Trek 2016: Star Trek Turns 50.” Sadly, I was unable to attend, but the description for the panel on the Wizard World website perfectly summed up what it feels like to be a Star Trek fan in 2016:

2016 is the 50th anniversary of one of the most beloved franchises in fandom and so far, many hardcore Trek fans have felt…underwhelmed… by the “celebration.” This panel is an attempt to discuss, with Trek Fans, the current – and possibly lacking – state of the Star Trek franchise. Does it work better on TV? Is it an untapped “Mega-Franchise” a-la Marvel, or has Trek’s time essentially past in the wake of “hipper and glossier” sci-fi. We hope to zero in on the successes and failures of the recent Trek efforts as well as state our hopes for the upcoming series “Star Trek: Discovery.”

Of course, within days of that panel Star Trek: Discovery lost its showrunner. As first reported by Variety, Bryan Fuller has stepped down to focus on his two other TV shows, Starz’ upcoming American Gods and an Amazing Stories reboot for NBC. The news is not actually as bad as it sounds. Fuller’s already written the scripts for Discovery‘s first two episodes, mapped out a season long story arc and thus established all of the new characters in such a way that his replacements Gretchen Berg and Aaron Harbert, whom he hired to his writing staff in the first place and has worked with many times before, can easily follow his lead. Moreover, word is Fuller will still be involved as an executive producer, although that is quite often just a ceremonial title.

But, still, the optics here don’t look good. Fuller’s one of us, a lifelong Star Trek fan, except unlike us he gained access to the Next Generation set, slid his spec scripts under the doors of the producers after hours and kept doing that until they’d hire him. Cut to today and he’s a superstar showrunner with a loyal fanbase who’ll follow him from one ratings-challenged critical darling (Pushing Daisies) to another (Hannibal) and will probably get Starz, if they don’t already have it, just to see American Gods. His involvement with Discovery, officially co-creating it with Alex Kurtzman, was supposed to be his big homecoming and exactly the thing needed to pacify those Trekkies who’ve never quite warmed to the JJ Abrams Trek movies. Bummed that the new movies were made by an outsider who had no deep love for the material (and it showed)? Well, now here’s a new TV show made by a lifelong fan, and it’s even set in the old Original Series-Next Gen-DS9-Voyager-Enterprise timeline.

Except, of course, Fuller overcommitted, stretched himself too thin and now has too many spinning plates to do Discovery justice. In that sense, him stepping down as showrunner could actually be considered a break for the show, kind of a “finally the show might move forward now that it has people in charge who actually have the time to work on it” moment. That is, of course, assuming the feet-dragging is Fuller’s fault. For all we know, the network, CBS, could bear some of the blame. 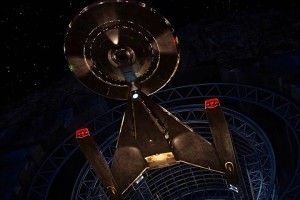 Either way, Fuller’s involvement was like 60% of the reason to be excited about the show, the other 40% being “lead character will be female,” “one crew member will be openly gay,” “Nicholas Meyer is on the writing staff,” and “it’s Star Trek!”. Moreover, this is just another behind the scenes complication for a show which has already been delayed 5 months (from Jan. ’17 to May ’17) and seemed so strapped for ideas that Fuller turned a San Diego Comic Con panel into a glorified focus group (instead of sharing any concrete details about Discovery he simply asked the crowd and panelists to talk about what they love most about Star Trek). All of this despite the fact that the show’s budget has already been 100% bought and paid for thanks to Netflix, which is paying a lot of money to be the exclusive worldwide home of the show, except in the U.S where we’ll all have to subscribe to CBS All Acess to see it. 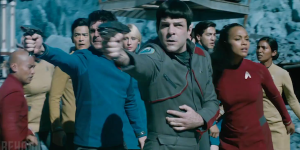 None of this means Discovery will be a disappointment, but it does contribute to the larger narrative that all Star Trek projects must struggle to get out of the gate these days. We had to wait four years (with multiple release date changes) for Into Darkness because that’s how long it took them to come up with a script they liked as well as sufficient free time in J.J. Abrams’ schedule. The wait was cut down to just three years for Star Trek Beyond, but it, too, underwent multiple release date changes and a leadership change halfway through pre-production when would-be director and co-screenwriter Roberto Orci was effectively fired when no one else wanted to film the script he’d come up with. They had to throw together a completely new script in record time, yet hired two writers, series star Simon Pegg and Doug Jung, with no blockbuster movie writing experience whatsoever. Orci’s replacement in the director’s chair, Justin Lin, later admitted he’d never heard of a movie of the scale of Beyond being so rushed.

It’s thus a miracle that Beyond is as good as it is, but it underperformed at the box office, failing to at least double its production budget ($185m) in worldwide gross ($340.6m). Paramount’s still committed to a sequel, though, one which will return most of the same cast and producers while also somehow returning Chris Hemsworth as Kirk’s (dead) dad.

Thus it is that in this, the 50th Anniversary of Star Trek, the highlights of the year for the franchise have been the relatively recent BBC America marathon of the best Original Series episodes, an insanely under advertized “The Music of Star Trek” symphony tour and the release of two unofficial oral history books. Plus, anyone lucky enough to attend the Comic Con premiere of Beyond will probably never forget the experience. Hey, that’s at least something, but it’s not as strong as it could have been.

I wonder what the people in Tulsa argued last weekend. I’ll answer some of their questions:

Is it better as a TV show? – Probably, but we all seemed cool with Star Trek II-IV being like a three-part episode with multi-year long breaks in-between installments.

Is it an untapped “Mega-Franchise”? – No. Paramount has tried to make this happen for three straight films, and it just isn’t in the cards. The future for Star Trek should be smaller, not bigger, more manageable budgets and all that.

Has Trek’s time essentially past in the wake of “hipper and glossier” sci-fi? – Yes. The zeitgeist has been yielded to other properties, but that doesn’t mean Discovery and/or a future film sequel couldn’t move the needle again.

Our hopes for Star Trek: Discovery? – That it actually airs. We can get into specifics once we actually see a trailer or the first cast announcement, but at this point let’s keep our aims low and hope they actually finish this thing.