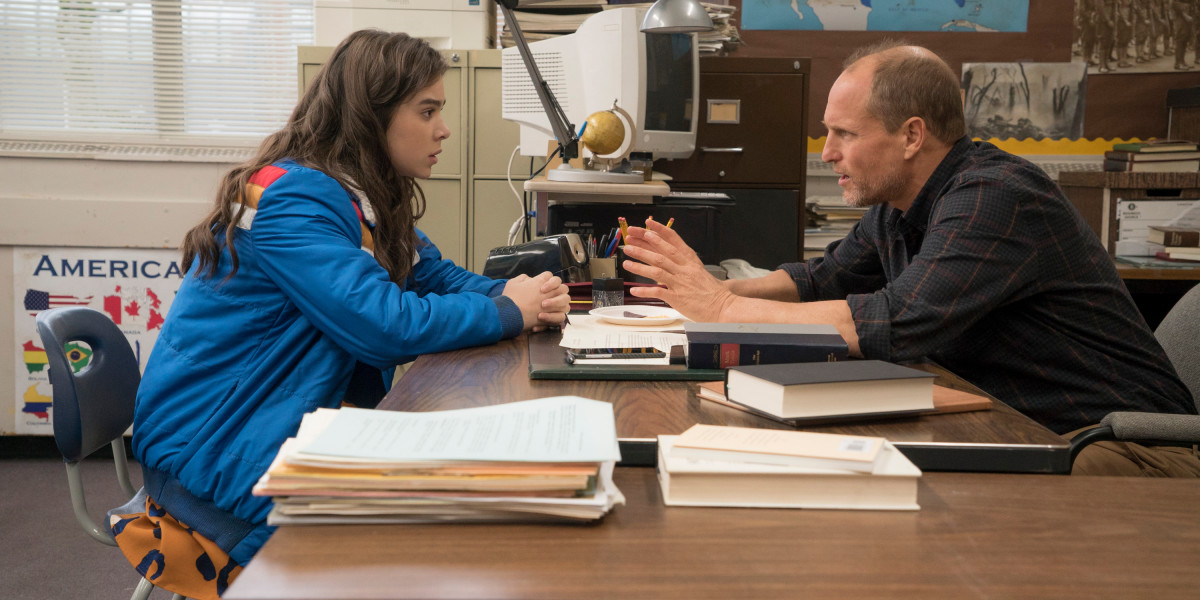 As The Edge of Seventeen opens, Nadine (Hailee Steinfeld), a dramatic sixteen-year-old, bursts into her history teacher’s classroom during lunch hour and launches into a mile-a-minute speech proclaiming her intentions to commit suicide. For what reason she’ll kill herself we do not know, but we can gather from her demeanor (as well as the quick jokes she makes during her speech) that this is not a legitimate threat on her part. Instead, she appears to be a teenage girl in full melt-down mode, likely in reaction to the latest ultimately insignificant event which to her feels akin to the world ending.

We don’t know that for sure, though. Maybe Nadine really is suicidal. It’s not like teen movies haven’t covered that before (e.g., Dead Poet’s Society, Pump Up the Volume, It’s Kind of a Funny Story). This could be quite the dark beginning to this little coming of age dramedy all the critics seem to love so much.

But then Nadine’s teacher Mr. Bruner (Woody Harrelson) calmly and slowly responds, undercutting the seriousness of the moment by revealing he was actually in the middle of writing his own suicide letter. He even grabs a piece of paper on his desk, pretends it’s his letter and reads from it, revealing he’d finally snapped after having the one highlight of his day, namely his quiet and relaxing lunch hour, snatched away from him. Nadine flashes him a “you a-hole!” stare while he proudly bears a mischievous grin and confidently leans back in his chair, having successfully defused her melodrama. He appears to be the one adult who will actually call Nadine on her bullshit.

It’s a preternaturally confident start to one of the finer debut films of the year, perfectly establishing the tone and setting us up on a journey toward finding out what exactly pushed Nadine to this fake suicidal moment and how it is that her teacher knew not to take it seriously.

We come to learn Nadine has been driven to such desperation after losing her emotional support system, first her father to a heart attack five years prior and then her best and only friend Krista (Haley Lu Richardson) to her older, perfect brother Darian (Blake Jenner), this unexpected romance between best friend and sworn enemy throwing Nadine’s life into complete disarray. Of course, her best friend dating her brother, who is only a year older than them and goes to the same high school, doesn’t have to be such a crisis. It doesn’t have to be a seen as a complete and utter betrayal. After all, Krista still wants to be her friend. Nadine simply refuses to see it that way.

Isolated, Nadine attempts to make new friends (finding one in the immensely charming Hayden Szeto), but struggles to get past her own social awkwardness as well as her tendency to talk at such a rate that the other person can’t get a word in edgewise.  She more or less forces a tentative friendship with Mr. Bruner and obsessively cyberstalks a cute boy she doesn’t even know, clearly seeking out any kind of emotional connection she can get.

As advertised, Edge of Seventeen is indeed a coming-of-age dramedy, immediately calling to mind any number of prior films like The Duff or Easy A but with a more indie vibe ala Diary of a Teenage Girl or The Perks of Being a Wallflower. However, it is a refreshingly newish spin on the familiar since in this coming-of-age story the main character’s path toward self-actualization is to first realize she’s not actually the center of the world. As FreshFiction perfectly put it, “[Nadine] has a lot to learn about life – specifically that it’s not all about her. For her, the journey is hell, but for the audience, it’s the perfect cinematic teenage dream.”

Writer-director Kelly Fremon Craig perfectly balances Nadine’s engaging narcissism (she does not lack for witty one-liners) and repeated false assumptions, so much so that we are usually just as surprised as Nadine when the world turns out to be nowhere near as simple she believed.  As Craig, who has admitted she grew up on the John Hughes teen movies, told FreshFiction, “I have such a fetish for realism. I love the messy truth of people. I love that people are a lot of things at once and a lot of times, those things are antithetical to each other. In a lot of ways, it was trying to capture that.”

Craig brings that “fetish for realism” to the script, but she also displays a keen visual sense, such as during a flashback to the hospital room where Nadine’s father died. The camera veers into this emotional moment through the door, the father’s body almost completely out of frame. Instead, we watch as the mom (Kyra Sedgwick) weeps uncontrollably while being comforted by her son, and Nadine, the forgotten daughter, stands quietly on the opposite side of the hospital bed, isolated, as per usual.

Little cinematic touches like this are present throughout the film, helping to elevate Edge of Seventeen into something spectacular and Craig into a talent worth watching. We already knew Hailee Steinfeld was a rising star, and this is easily her finest performance yet. But Craig is equally worthy of our praise and dutiful focus on what she might do next.

Edge of Seventeen is an endlessly engaging and insightful coming-of-age dramedy about a girl who has to realize the world doesn’t actually revolve around her, and writer-director Kelly Fremon Craig and star Hailee Steinfeld turn this seemingly obvious lesson into something quietly profound.