Manchester by the Sea, Kenneth Lonergan’s bleak, moving portrayal of new grief piling itself upon deep-rooted anguish, exists in a perpetually cloudy and frigid setting. The titular town, comprised exclusively of somber colors, cannot help but look foreboding and inhospitable. The town’s look and feel reinforces the idea that this film is comprised of characters dealing with their own emotional damage and creating sullen outlooks to keep their grieving at bay. It’s into this familiar-seeming and fully realized world that Lee Chandler (Casey Affleck) finds himself forced to return.

Lee functions as a man who oscillates between emotional numbness and brief punctuations of rage. He works as a handyman in a Quincy, Massachusetts apartment complex. Throughout early portions of the narrative, we see flashbacks of Lee as a more jocular, carefree individual. He has a good relationship with his brother (Kyle Chandler) and his nephew. He has a wife (Michelle Williams) and children he loves. In the present day, he’s just a man drifting through life while waiting for death. We know something has gone terribly wrong for Lee, but Lonergan plays coy with the final reveal until about a third of the way into the film. Once we know the full story, it’s easy to see why Lee revels in self-loathing and emotional suppression the way he does. Processing his grief is something he just cannot bring himself to do.

Lee finds himself forced to return and linger in Manchester after his brother, Joe, chronically ill from congestive heart disease, passes away. He’s forced to break the news to his now estranged, teenaged nephew, Patrick (Lucas Hedges). Patrick has emotional difficulties of his own. He’s balancing two girlfriends, each one unaware of the other, and has his own issues with pent-up rage that breaks through when provoked. It’s obvious he’s been trying to prepare himself for his father’s death, but he hasn’t come to terms with the anger he feels towards that inevitable loss. He’s attempting to practice the same emotional numbness his uncle employs, but both lose control of their rage at unpredictable intervals.

It’s evident that Lee is uncomfortable being back in Manchester, and that the town locals aren’t entirely at ease with his presence either. He is repeatedly, cryptically referred to as “The Lee Chandler” in hushed, horrified whispers. However, all these little obstacles pile up around him, forcing him to remain in the town he’d rather flee. He has to keep his brother’s corpse frozen until the ground thaws enough for a burial, a fact that rankles Patrick and leads to him breaking down when encountering frozen meat tumbling out of his freezer. Lee also learns that Joe’ will leaves his boat, house, and his son in Lee’s care, responsibilities Lee feels ill equipped to handle. The rest of the film is basically a countdown as to whether or not Lee’s numb exterior will melt away like the passing winter. Everything is on hold until the thaw, be it a physical thaw or an emotional one. 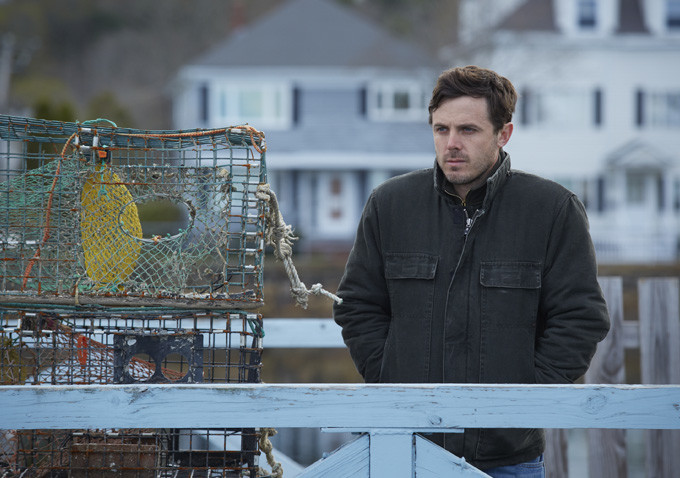 This setup makes the film sound almost unbearably grim, and the plot does wallow in despair in a way that is almost emotionally unendurable for the viewer. It’s only the interspersed moments of wry humor that keeps the film from buckling under the weight of its own despair. Much of the credit goes to writer/ director Lonergan who recognizes that humor doesn’t stop just because someone is grieving. Sometimes you find yourself wanting to laugh more simply because you need it. He’s always recognized that humor is lurking just beneath the surface of angst. You Can Count on Me, his first film, centered around two estranged siblings who find their lives beginning to re-intertwine, blended wrenching drama with dry, familial humor. With both films, he manages a delicate balancing act. Humor in the face of loss could cheapen the film’s emotional center, and grief in the face of humor can make the humor feel tasteless. Yet, the comedy and the tragedy lay comfortably side by side, each complimenting and enriching the other. Manchester has a spikey, sarcastic humor that permeates every facet of the characters’ daily lives, and Lonergan’s central characters feel vital and fully developed as a result.

Lonergan has assembled a cast that is uniformly flawless. Casey Affleck has long since emerged as an idiosyncratic, compelling screen presence. He has a steely, internal reserve that contrasts with his small, vulnerable frame and a face that looks as though it has seen too much. Here, he has the difficult task of making emotional detachment arresting. He’s more than up to the task, he managing to convey both the self-hatred and despair Lee hides just behind the walls he’s assembled around his emotions. We care about him, because we recognize how traumatized he is. There’s a moment later in the film in which he’s confronted by a character. You assume this person is going to say something to him that’s angry and guilt inducing, but instead it’s an attempt to absolve him and urge him to move forward. Watch the despair that hides behind Affleck’s eyes and the way his frame begins to turn in on itself. It’s one of the most perfectly realized sequences I’ve seen on screen. 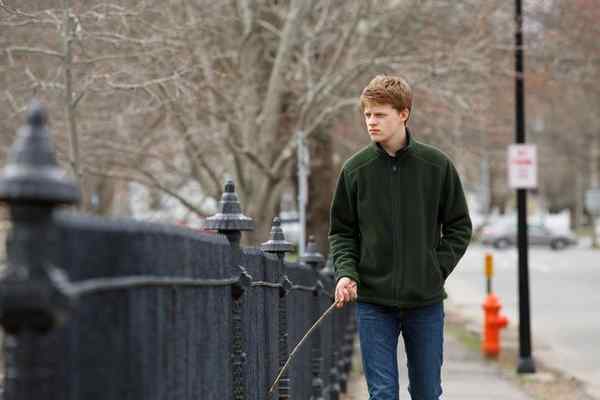 Lucas Hedges infuses the younger Patrick with an inherent likability that makes up for actions that could feel unsympathetic with a less appealing actor. One could feel some annoyance with a character who spends as much time pursuing sexual encounters as he does grieving his father. However, Hedges ensures the viewer understands he drifts through relationships because he’s lost so much. His mother is barely in his life, he’s known his father is living on borrowed time, and the uncle he once spent so much time with abruptly exited his life. He doesn’t form attachments, because attachments only lead to pain. Much of the film’s praise has centered on Affleck (and deservedly so), but Hedges is just as essential to the film’s success. He has an affable, familial chemistry with Affleck that creates a kind of guarded intimacy that comes from estranged relationships attempting to reform. Michelle Williams has a smaller role, but she uses that limited screen time to create a character that feels alive and emotionally resonant.

The film has all these little narrative signposts that signal routes a safer film could take. There’s a single mother (Heather Burns) who unabashedly has a crush on Lee and there’s the ticking clock of approaching spring, at which time Lee plans to move to Boston. In safer narratives, we’d have a clear idea as to how this film would play out. Lee would grieve and confront his past but he’d move on and grow. Films typically make coming to terms with life’s blows seem so straightforward and effortless, yet Lonergan recognizes the battles aren’t always so easily won.

Manchester by the Sea takes the more believable, less certain approach. Growth isn’t a linear progression. It’s a mixture of forwards and backwards steps, comprised of progress and setbacks. The film is beautiful and despairing but ultimately human and life affirming. It’s a film that has stayed with me, lingered and woven its way around my mind since I saw it, a near-flawless examination of human fragility and grief. Lonergan has made a masterpiece, and it’s my favorite film of the year.