“Checkmate” finally gave Oliver and Adrian “Prometheus” Chase their long-awaited face-to-face confrontation, but it did so in such a familiar way, reminding us that season 5 is purposefully trading on the legacy of the first four seasons. There’s an Iron Man 3/Dark Knight Rises “the past is coming back to haunt the hero” vibe to it all, but also a sense that had the CW not already decided to renew Arrow for another season then season five could feel like it had brought everything full circle and completed the five-year arc we were promised when the show premiered.

As such, in the flashbacks Oliver adopted his Hood guise to take down the treacherous branch of the Bratva, who apparently hide out in a hockey stadium because Amell probably just really wanted to do some Arrow action scenes on ice. Thus, Oliver is that much closer to his season 1 self. And it just wouldn’t be Arrow without a terrible flashback wig, although this one is probably the least terrible of them all (high praise, I know).

In the present, Oliver’s shock at learning the truth about Adrian led him to eventually speechify about darkness and vulnerability and whether or not there are some basic human traits he no longer has a right to due to his life as a vigilante. Diggle was there to lend his ear and words of support, doing his best not to roll his eyes and simply say, “This shit again, Oliver. Really?” For those keeping track at home, Oliver is veering back toward thinking he needs to push everyone away to keep them safe. So, he’s back in season 3 mode, or at least was until Diggle reminded him that he draws his true strength from those around him.

This, really, is a point which Arrow AND Flash beats home over and over again, so much so that it’s starting to lose all meaning. However, it’s pretty much vintage Oliver to brood and run through the basic vigilante playbook of knowing when and when not to close yourself off to those around you. Adrian’s soul crushing actions caused him to revert, but Diggle pulled him back from it, setting the stage for a final confrontation in which Oliver attempted to use Adrian’s own vulnerability (i.e., his lovely, but completely out-of-the-loop wife) against him (much as Anarchy tried to do against Damien last season). 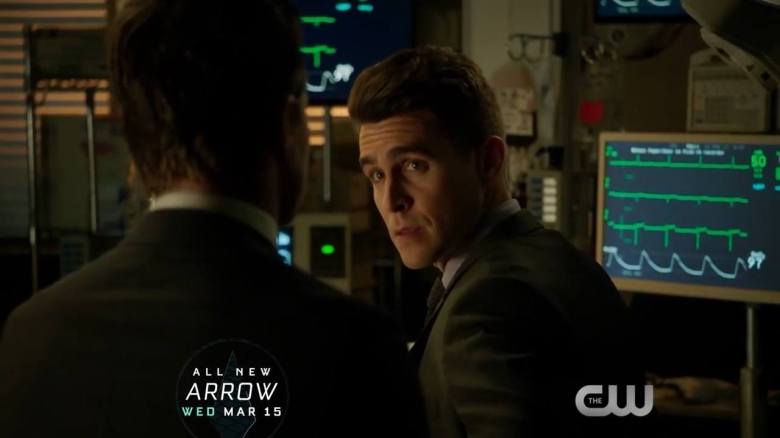 But Adrian’s straight up crazy, and Arrow clearly has no problem with fridging female characters. So, Oliver’s gambit (tell wife about Adrian’s secret, present her with proof, hope she’s the one person who can get through to him and sue for peace) backfired spectacularly, resulting in one dead wife and one seriously pissed off Adrian because, sure, he killed his own wife, but he didn’t seem too happy about it.

The ensuing fight was classic Arrow, with Oliver and Adrian being thrown through walls and windows. The fact that Oliver lost and is now heading for some extended torture designed to mentally and physically break him recalls his treatment at the ends of Ra’s al Ghul last season, which makes since -dundundun -Talia has been the secret big bad behind Adrian this entire time because she too lost a father to Oliver.  Now, we have a vengeance-seeking Deathstroke-like villain teamed up with an al Ghul.

Lesson of the day: when you meet a mysterious woman in Russia who knows everything about you and offers to train you it doesn’t hurt to at some point catch her last name or at least ask for it. If you do you might be able to connect certain dots far sooner and save lives. Flashback Oliver is sure lucky he’s so pretty.

You can’t teach an old vigilante superhero show too many new tricks, but “Checkmate” mixed in enough new with the familiar to make this possibly one of the most classically Arrow episodes of the current season, even if that meant yet another female character had to die for no reason.

The unfamiliar parts of the episode included Felicity ongoing slide down the slippery slope into possible villainy, heeding her brunette doppelganger’s “we’re going to change the world” call to arms even though that’s the type of thing a supervillain who believes they are the hero would say. Similarly, Oliver’s patient reaction to Felicity’s situation was also a new leaf for him, no barking or hypocritical ordering but instead “please let me help you by helping me understand all of this” bridge building. Lastly, at least for now we have been spared yet another round of “am I killer or not?” soul-searching on Oliver’s part, replacing it with his ongoing confusion over Adrian’s intensions (e.g., “If you don’t want to kill me then what’s this dance we’ve been doing?”).