Earlier today, Variety exclusively reported that Joss Whedon is nearing a deal to write, direct, and produce an untitled Batgirl movie that is being described as both standalone and part of the DC Extended Universe, with various other characters from the world of Gotham expected to appear. Further details will undoubtedly be in the offing in the coming days, and all of us cynical nerds will make damn sure people remember that Whedon was once hired to write a Wonder Woman movie that ended up not happening. So, wait and see and all that.

But in the here and now surely this news warrants applause. Joss Whedon is finally back to making comic book movies! And it’s a female-led movie this time! The man who created Buffy Summers is now going to bring a live-action Barbara Gordon to the big screen, probably drawing heavily from the Buffy-esque run by Gail Simone in the New 52 Batgirl! Yay…?

I add the question mark because this news is just, well, odd. Actors have jumped ship from Marvel to DC or DC to Marvel before, but would Whedon be the first director to do so since Bryan Singer bolted from the X-Men for Superman Returns? Plus, in the immediate aftermath of the 2015 release of Age of Ultron, which more or less broke Whedon, he was quoted as saying:

“I’ve wanted to make superhero movies since I knew that there were superheroes and that there were movies, And for a long time I didn’t think that was going to happen. And then it did…For like, five years. But I think having done that and having fulfilled that dream, hopefully people will like the movie and think it was a good idea to fulfill that dream. I have to do something else. Have another dream.”

Then late that year at Paleyfest, he said, “”I’m looking to do is something new. Really something I haven’t done before. The last five years I haven’t created a universe.” 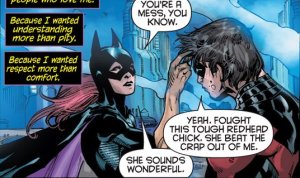 Batgirl isn’t something new. At first glance, a Joss Whedon Batgirl would likely just be Buffy with more spandex and a bigger budget, and that could be totally rad. But does Whedon really need this? Surely, it’s Warner Bros. which needs him, not the other way around, right?

This could be a significant test of WB’s once chest-beating claim to be building its DC Extended Universe as a friendly place for filmmakers and not simply a mecca for hired guns to point and shoot their cameras and get the hell out of the way when the producers want to take over. After all, Whedon’s post-Age of Ultron exhaustion was not just due to the mind-boggling logistics of finishing the expansive film but also the continued battles he had with the then Ike Perlmutter-run Marvel Studios (Kevin Feige is singularly in charge now). With Batgirl, Whedon might finally be allowed to make the exact comic book movie he wants, although ask Suicide Squad’s David Ayer how well that worked out for him.

Of course, there’s also the possibility that Whedon inadvertently burned some bridges with his ongoing frankness about his Age of Ultron and Agents of SHIELD tensions with Marvel Studios, or that he has become typecast as a director due to the Avengers and whatever new, non-comic book thing he might have wanted to make simply wasn’t there for him, money wise. Perhaps Batgirl is something he has to do because the number of opened doors available to him after Ultron were far smaller than we’d guess. However, I struggle to believe that Whedon couldn’t go to Netflix’s headquarters tomorrow and walk out of there an hour later with a 10-episode order for a new TV show. It would astonish me if Batgirl is something he has to do, career-wise. As such, the fact that he apparently wants to do it makes me excited for this because it would mean we’ll be getting a true, unfiltered Joss Whedon Batgirl movie, not some corporate-noted-to-death hack job.

Then again, Batman v Superman, for better or worse, is quite clearly an 100% authentic Zack Snyder movie. So, you know, these things don’t always work out. However, I trust in Joss. What about you? What do you think about the prospect of a Whedon-directed Batgirl movie?