According to Buzzfeed (and various others sources), Jeff Goldblum will appear in Jurassic World 2.

And, hold on, we are literally less than a year removed from this:

That’s a still from Independence Day: Resurgence, in case you couldn’t tell. I mean, you probably could, but I can’t assume anything, not with how hard that movie bombed last summer.

So, we have an actor returning to a franchise which already didn’t know what to do with him in one sequel, and it’s been less than a year since his failed attempt to revisit  one of his other greatest hits from the 90s. I should be swooning, why?

Fine. The Thor: Ragnarok costume designer barfed Guardians of the Galaxy clothes on him, and he pulls it off as if he’d happily walk into one of his jazz clubs (bt-dubs, Goldblum is a still-practicing jazz pianist) looking like that. So, the internet is happy with Goldblum right now.

Even so, he couldn’t turn his second time playing David Levinson (that’s right, I just looked up his Independence Day‘s character’s name) into gold. Why will a third time around with Dr. Ian Malcolm be any different? Different filmmakers and writers and all that, but still the same foolhardy attempt to recapture a past glory and rake in on the nostalgia.

Says the guy who loved Sylvester Stallone in Creed.

Yeah, but have you seen how many people saw but did not really like Jurassic World? A little Ian Malcolm could go a long way toward remedying that. Plus, he’s already kinda, sorta in Jurassic World via the repeated easter egg inclusion of his character’s book God Creates Dinosaurs: 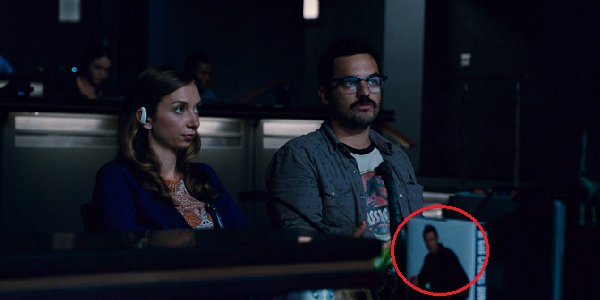 And if Ian Malcolm exists in the Jurassic World universe (which he obviously does) it’s only logical that he have some role, even if just a talking head cameo, in a sequel. The chaos theory thing he was probably warning the Jurassic World people about for years finally happened, and he can come along for a well-earned toldyaso as well as a Biff Tannen-esque “There’s something awfully familiar about this” since Jurassic World 2 could simply be a movie-length version of the last quarter of Lost World.

Thanks for asking, childlike other me. Now I can close out with the standard speel about how Jurassic World 2 is being directed by J.A. Bayona (The Impossible, A Monster Calls) from a screenplay by the same duo behind the first Jurassic World (Colin Trevorrow and Derek Connoly and, one assumes, a shitton of uncredited rewriters). Chris Pratt and Bryce Dallas Howard are returning to reprise their tepid romance. No word yet if Blue the Velociraptor will return. Maybe he’s settled down into an odd couple marriage with the T-Rex. We don’t know. Maybe he’s dead, unable to cope without the guidance of alpha male Chris Pratt. We’ll just have to wait to find out when Jurassic World 2 hits the US on Jun 22, 2018.