“The man in black fled across the desert, and the gunslinger followed.”

This is the first line of Stephen King’s The Dark Tower: The Gunslinger, the horror author’s self-proclaimed “magnum opus” which takes place in an alternate Earth known as Mid-World and combines Tolkien, Arthurian legend, Spaghetti westerns and metafictional conceits into one seriously vexing series of novels which are just as much about the art of telling a hero’s journey as they are about actually taking us along that hero’s journey. Stephen King himself had become a character in the storyline by the time the 8th and final novel in the series arrived in 2012, some 30 years after the publication of that first line in The Gunslinger. The ending he offered sacrificed closure in favor of making a larger commentary on the circular nature of our heroic myths. Spoiler alert: The man in black will always be fleeing across the desert, and the gunslinger will always be in hot pursuit because good vs. evil never goes away.

So, yeah, good luck turning that into a movie, Hollywood. 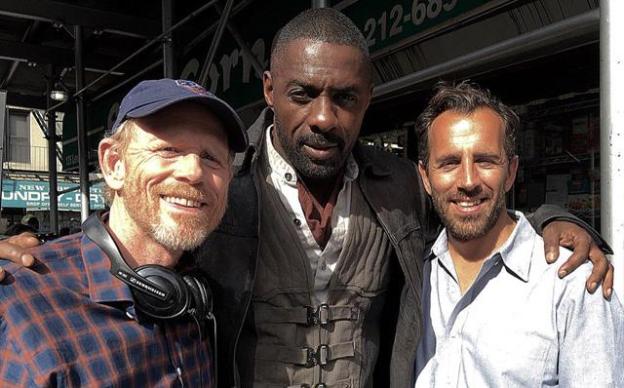 Ron Howard tried for years, taking his proposal to studio (Universal) after studio (WB) and getting nowhere until Sony finally bit, mostly because the franchise-poor, freshly hacked studio was desperately looking for ways to “galvanize audiences who aren’t interested in comic books,” as then-new chairman Tom Rothman told Variety. Howard’s pitch was to produce a trilogy of Dark Tower films which would be complimented by a TV series to fill-in the gaps in-between moves. That proved too costly for Universal and WB. So, he had to settle at Sony for producing one movie, then a limited prequel TV series (from The Walking Dead’s Glen Mazzaro) and then waiting to see if there’s enough of an audience to justify going any further.

That’s probably why The Dark Tower, directed by A Royal Affair’s Nikolaj Arcel and starring Matthew McConaughey as Walter (aka the Man in Black) and Idris Elba as Roland (aka The Gunslinger), feels less like a feature-length film and more like a glorified TV pilot. Even the truncated-running time, 95 minutes, gives the impression of a product made with commercial breaks in mind. And if this was just a TV pilot, like maybe HBO, Netflix or SyFy’s next big thing, it would actually be pretty decent:

We are introduced to the major characters (which includes Earth boy Jake Chambers in addition to Walter and Roland), and get to know them, but only in broad strokes. There’s a problem the heroes have to solve (defeating the big bad) which is understood to actually be a secondary concern to the larger challenge ahead of them (protecting the titular Dark Tower which maintains order in the universe). Backstories are referenced but rarely explained, since that’s really more of an episode 3 or 4 kind of thing. And we end with a fair understanding of what their future adventures will look like, the Gunslinger and his psychically gifted protege Jake (who has “the shine” ability just like Danny in The Shining) traveling Mid-World together and fighting all who seek to destroy the Dark Tower.

But this isn’t a pilot. Some of these actors will cameo on the prequel series in wraparound sequences, but for the most part the show will focus on new actors playing younger versions of Roland and his crew, all of whom have been killed by Walter by the start of the movie (which technically serves as a sequel to the books). And we don’t know if there will be any more movies. The box office will determine that (and it’s not looking good so far). For now, all we have is this weird version of The Dark Tower playing in theaters. It’s not quite a complete movie, not quite a TV pilot and not really a straight adaptation of any one of the books. So, you have to give this to them: Even in today’s IP-obsessed Hollywood, nobody has gone about launching a franchise quite like this before.

If you forget all that, though, and simply approach The Dark Tower as just another summer movie that happens to feature a couple of big names (McConaughey, Elba) it’s … well, it’s still not great, but it’s also not quite as bad as its RottenTomatoes score (18%) would lead you to believe. It feels strange to complain about this since I’m usually of the believe that most Hollywood blockbusters are overly long, but The Dark Tower is too short for its own good and feels slightly hacked to death by studio suits displeased with the director’s early cut. And the level of gun worship and glorification on screen is, at times, troubling, and other times too indebted to the cinematic language of first and third-person video game shooters. However, they cast the right actors to at least hold our attention throughout.

The plot, brought to us by four credited writers, is a combined Last Action Hero/Tomorrowland tale about an emotionally troubled New York kid who dreams of things which turn out to be real, eventually transporting him away from Earth to Mid-World to work through his dead daddy issues while hanging with Roland, who similarly lost a father and emerges as Jake’s new father figure. There’s even a fish-out-of-water comedy section where Roland transfers over to New York with Jake in pursuit of the bad guy but quickly detours into a funny first encounter with pain killers drowned by Coke (which Jake simply calls “sugar”).

While the actor playing Jake (Tom Taylor) does an admirable job, what makes any of this truly watchable is Elba’s magnetic turn as the tortured gunslinger hellbent on revenge and McConaughey’s debatably captivating or laugh-inducing turn as the evil wizard who gets to say things like “Death always wins” and often kills by nonchalantly ordering people to “stop breathing.”

The script tries to differentiate the hero and villain’s moral codes through frequent recitations of The Gunslinger’s mantra, which is beloved on the page but comes off as awkward in the film, despite Elba’s best efforts to deliver “I shoot with my mind. I do not kill with my gun; he who kills with his gun has forgotten the face of his father. I kill with my heart” with as much as gravitas as humanly possible. However, you absolutely feel Roland’s determination just as you feel Walter’s, and the build-up to their eventual battle is well done even if their actual fight leaves a lot to be desired and the stakes not well articulated.

Too different to please fans of the source material, too bland to completely win over new fans, The Dark Tower is at least watchable thanks to Idris Elba’s commanding lead performance.