In BoJack Horseman’s recent episode “Thoughts and Prayers,” the show’s anthropomorphized animal stand-ins for cliched Hollywood actors, agents and directors suffer the crisis of having to edit their latest film and its related marketing effort on the fly when tragedy strikes. They thought they were making a basicTaken rip-off action movie about a strong female protagonist having gunfights in a mall, movie theater, and other public areas. However, when a series of real-life mass shootings take place in each of the types of locations depicted in the movie they just seem insensitive. Each new incident forces them to cut yet another chunk of the film until all they have left is a single scene of a woman walking up to a guard in the mall and asking for directions to an H&M.

Show creator Raphael Bob-Waksberg told SlashFilm the episode was his attempt to speak to the question of Hollywood’s culpability for the type of “stories that we tell and how we tell them.” In this case, it’s less about gun control and more about how the repeating phenomenon of “too close to home” movies scrambling so as not to seem insensitive speaks to the precarious balance Hollywood has to walk as life increasingly imitates art.

No one at Warner Bros., Skydance Pictures, and RatPac needs to watch “Thoughts and Prayers” to get that. They just lived it.

Originally shot in 2014, WB’s Geostorm arrived in theaters mere weeks after parts of Texas and Florida and all of Puerto Rico were pummeled by Hurricanes Harvey, Irma and Maria respectively. Naturally, Geostorm bombed to the tune of just $13.3 million on a $120 million budget, an opening so dismal that barring an overseas box office miracle the film will likely lose between $50 and $100 million for its investors.

This might seem like the inevitable conclusion for a film which had a terrible idea for plot (basically, every disaster movie rolled into one as a futuristic system controlling the world’s weather malfunctions and triggers a planet-wide catastrophe) to begin with, hired a first-time director (Independence Day producer Dean Devlin), was rejected by test screening audiences once it had finished filming and then underwent months of expensive reshoots overseen by a new producer (Jerry Bruckheimer) and director (Gotham’s Danny Cannon). Even without the unfortunate timing of promoting mindless weather-based destruction after hurricanes ravaged significant parts of North America, Geostorm might have been doomed to fail because it simply has the look of a bad movie.

However, WB is quick to point out Geostorm’s opening is partially so low because the film was flatly rejected in the Southeast, the South and Texas. “As evidenced by the extremely soft results in places hit by the hurricanes, the timing of the movie’s release was unfortunate,” says Jeff Goldstein, president of domestic distribution for Warners.

That’s the spin they’re offering now, but THR has some insight as to the type of spin control the studio engaged in once it became clear their goofy worldwide disaster movie was going to come out on the heels of some pretty significant hurricanes. 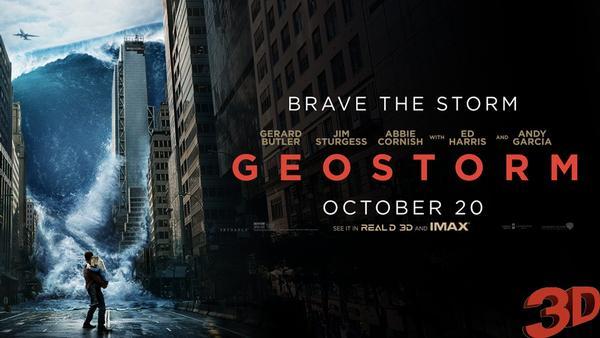 For starters, they yanked all of their movie posters (bearing the tagline “Brave the Storm”) from theaters in early September, sending theater owners a note reading: 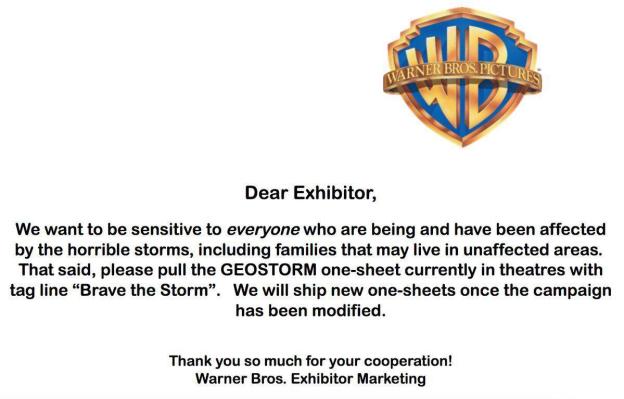 The new one-sheets eventually arrived with a modified tagline: “Control the Weather, Control the World.”

After that, they hid the movie from the tastemakers, opting against both early screenings for critics and even the now-standard Thursday night preview screenings for the paying general public. That way, the sub-15% RottenTomatoes rating Geostorm eventually got could be delayed for as long as possible.

None of it worked, of course. The irony is if the studio truly believes their movie was killed by bad timing they might have been better off simply releasing it a couple of years ago when it was ready to go, poor test screenings and all.

To be fair, a movie about big storms being impacted by a breakout of big storms isn’t quite the same as what happens in BoJack Horseman. There is no possible correlative relationship between Geostorm’s fake disasters and the very real hurricanes we’ve experienced. However, the world’s seemingly enhanced capacity for destruction and mobilized empathy might at least give some producers’ second thoughts before they greenlight big dumb movies like Geostorm.

As MTV argued back in 2012, “If past movies are any indication, Americans find it relatively easy to separate fictional blockbusters from current events.” While The Matrix was in theaters it was blamed by media outlets for the trenchcoat-wearing shooters at Columbine, but its box office fortunes remained unaffected. Sniper-oriented thriller Phone Booth was delayed for five months after the Beltway sniper attacks in 2003, and it eventually opened at #1. However, Arnold Schwarzenegger’s terrorist action flick Collateral Damage was yanked and recut after 9/11, making sure to excise a plane hijacking subplot. It arrived five months later to critical and box office indifference. Ben Stiller’s post-Trayvon Martin neighborhood watch comedy The Watch was similarly delayed 5 months, re-titled and re-marketed, but still suffered a box office disappearing act. Gangster Squad was delayed and recut to remove a movie theater shootout sequence after what happened in Aurora, Colorado, and it too turned into a bomb.

While unfortunately-timed movies can justifiably and usually do place some of their blame on their proximity to real life tragedy it’s often the case that those which suffer the most in this department weren’t very good movies in the first place. There are exceptions. Kathryn Bigelow’s Detroit is one of the finer films of the year, yet it suffered at the box office partially because people didn’t want to see a gritty historical drama about white-on-black police brutality when that’s happening in the real world every day. The intention and execution were noble, the audience disconnect unmistakable. Something similar happened this weekend to Only the Brave, a critically-lauded film about firefighters which happened to arrive at the same time as the California wildfires. Result: box office failure, a noble failure, but a failure nonetheless.

There’s nothing noble about Geostorm, though. The biggest trap, in this case, is for the studios, financiers, and filmmakers to convince themselves they simply fell victim to bad timing. Because that’s the easiest way to not admit they simply made a bad movie.