I know Coco’s a box office hit, mostly because the headlines keep telling me it is: 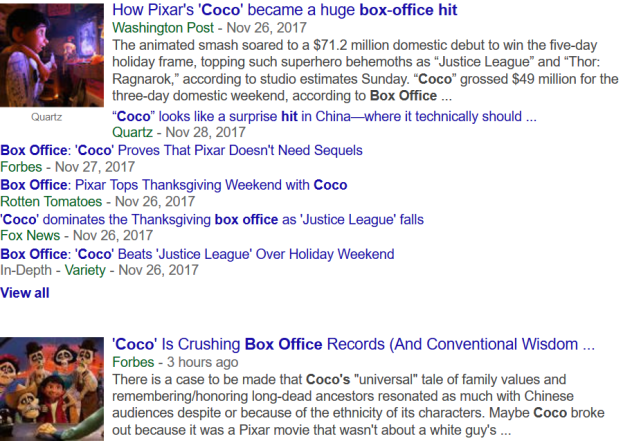 But exactly how big of a hit are we talking here? It grossed $50 million domestic over Thanksgiving weekend, $72m over the full five-day Thanksgiving holiday. Now a week later it’s still #1 at the box office with a 12-day gross of $108m. Um, yay? That’s good, right? It feels like those are impressive numbers, but, honestly, who the heck even knows anymore? Justice League grossed nearly $70m more than Coco by its 12th day of release, yet it’s considered a colossal disappointment which might, according to early estimates, end up losing $100m for WB.

Yeah, but Justice League also cost nearly twice as much to make as Coco ($300m for JL vs. Coco’s $180m), not to mention the always-sky high P&A spend.

Why am I even talking about Justice League, anyway? Come on, focus. The point of this article is right up there in the title: “How Does Coco Compare to Disney/Pixar’s Prior Thanksgiving Releases?”

The very first Pixar movie, Toy Story, was released over Thanksgiving, and 7 additional computer-animated Pixar or Disney movies have replicated that release strategy in the two-plus decades since then. That gives us 7 perfect comps for Coco and thus everything we need to figure out just how big of a hit it actually is. Because if Coco’s not at Frozen levels (the ceiling) and not at Good Dinosaur levels (the floor) then where is it, exactly?

Curiosity demands an answer, sure. However, so does the part of me which really needs Coco to be a smashing success to validate Disney/Pixar’s turn toward multiculturalism, forming a one-two punch with last year’s Polynesian-leaning Moana. Moreover, with Pixar’s future dotted with sequels what can we say about its last great original (at least last original for the next couple of years)? 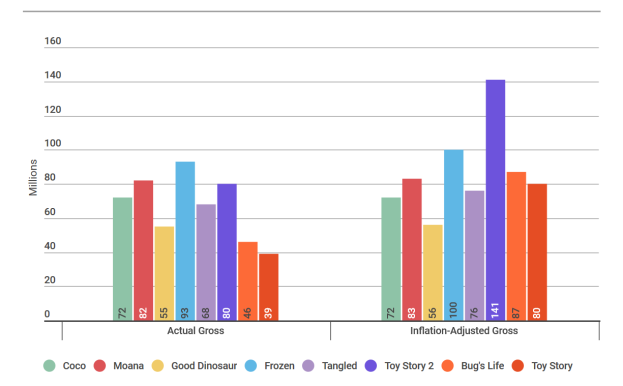 Hey. I’m trying to spice things up around here. As the charts, thank you very much, show, in actual dollars Coco’s opening is more Tangled than Moana or Frozen, which is perfectly respectable. Most importantly, though, it’s not The Good Dinosaur, Pixar’s first genuine money loser.

Somewhat predictably, after inflation adjustments, Coco falls a little further down the list since at current tickets prices decades-old films like Toy Story 2, A Bug Life’s and Toy Story would have completely killed. Combine that with the somewhat more modest jump Tangled gets from the inflation and you end up with the realization Coco actually sold fewer tickets across its first 5 days than anything other than Good Dinosaur.

Could the headlines have been wrong? Was Coco’s opening not actually the world beater we were told?

Thankfully, it only declined 46% in its second weekend. That’s a good hold. Surely the story won’t be the same when we look at….

Actually, the story is almost exactly the same, with the primary difference being Coco has now widened the gap between itself and Tangled in actual dollars. So, it’s on pace to easily beat Tangled’s final domestic total ($200m) and has leaped past Tangled in inflation-adjusted dollars.

Coco’s still not Moana, which grossed $248m domestic, $643m worldwide by the end of its run. It’s definitely not Frozen nor is it an equal to Pixar’s earliest Thanksgiving movies (my word, I’d forgotten that Toy Story 2 was such a chart-breaker in its day). But it is a bigger hit than Tangled and nowhere near the embarrassment of The Good Dinosaur.

The takeaway is Pixar pitched a non-franchise/non-sequel/non-Disney Princess story focused exclusively on Mexican culture to a wide audience and ended up striking enough of a universal cord to register what are, by company standards, respectable, if not quite mind-blowing numbers.

Of course, that’s only half the story. I focused on the domestic numbers because those make for the cleanest comparisons, but Coco’s truly thriving internationally, where it is already Mexico’s highest-grossing film of all time and Pixar’s top grosser in China (11-day total=$80m), making another case for (as Forbes argued) “disproving the idea that movies about ‘not a white guy’ protagonists (especially those not named Will Smith) can’t travel outside North America.”

Perhaps the answer to the question I opened with – how big of a hit is Coco? – is this: big enough to make everyone at Disney and Pixar happy.