Tarantino is partnering with Abrams on a new Star Trek movie? In any other year, I'd call bullshit, but, hey, it's 2017, the year where nothing matters and no level of crazy surprises anymore.

Turns out, this makes more sense than I realized. In 2015, Tarantino told Nerdist all about his love for Star Trek (“I would be more inclined to do a Star Trek kind of thing rather than Star Wars”), and earlier this year TMZ ambushed him at an airport and got him to admit the chance to direct a Star Trek movie would be a meeting worth taking. Beyond that, in Tarantino’s old life as an uncredited script doctor he worked the following line into Crimson Tide when Denzel Washington orders a soldier to repair the submarine: “Now I’m Captain Kirk, you’re Scotty, I need more power. I’m telling you if you do not get this radio up, a billion people are gonna die; now it’s all up to you.”

So, the dude’s a fan, but is he a big enough fan to make Star Trek his last ever movie? See, TMZ also got Tarantino to re-confirm his intention to retire after making only two more films, the first of them being the Manson Family drama set up at Sony. I already have my reservations about that project, which reads like a classic case of wrong director/wrong project. In Tarantino’s version, will 8-months pregnant Sharon Tate survive and brutally murder her attackers? Or is this going to be the version of Natural Born Killers Tarantino wanted to make before Oliver Stone took it away from him? As Mashable put it, “Tarantino’s sensibilities and true crime? These things go together like chocolate and onions.”

A movie about one of America’s most famous murders at least feels somewhat in Tarantino’s wheelhouse, even if it risks uneasily marrying his fetishizing of violence and love for cheeky dialogue with material which demands tact and reverence. Combining Tarantino with presumably big-budget sci-fi and giving him the keys to mainstream sci-fi’s most optimistic franchise feels like turning over the wheel to Toonces the Driving Cat, the old SNL sketch that always ended this way:

I say that because Tarantino doesn’t make normal movies; he makes Quentin Tarantino movies, same tendencies, same tone, same style of dialogue every time. Give him any old genre – war, locked-room mystery, grindhouse, blaxploitation, revenge fantasy – and out comes a Tarantino movie perfectly of a piece with everything else he’s ever done. The same would be true of his still hypothetical Star Trek, which would be okay if Trek’s visual, tonal and ethical identity at least somewhat aligned with his. They don’t. 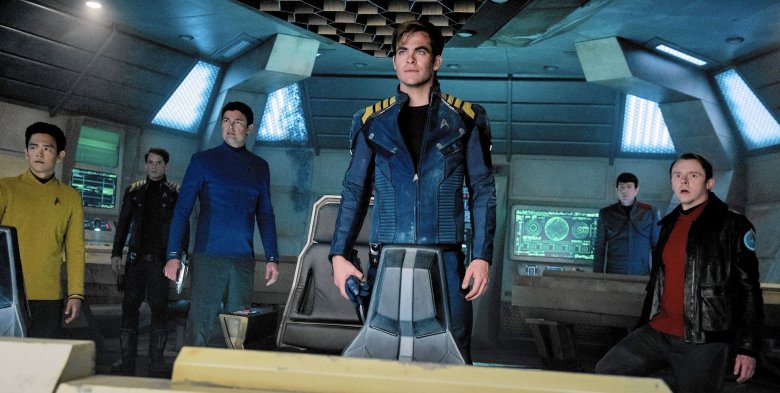 In general, Tarantino is ill-suited to franchise filmmaking, even if, as a pop culture obsessive, he ends up linked to just about every geeky thing imaginable:

He almost made Speed Racer (before the Wachowskis), Freddy Vs. Jason (before Ronny Yu), Halloween 6 (before Joe Chappelle), Luke Cage (before Cheo Hodari Coker), Casino Royale (before Martin Campbell) and so many others. He has more unfinished projects than finished, which, to be fair, is just part of the beast in Hollywood. Still, troubled franchise? Get me, Tarantino. But then he inevitably follows his wanderlust somewhere else and nothing comes of it. Maybe now that he’s so close to the artificial end of his career (remember, he just could just change his mind about retiring the same way so many others prematurely retired directors and actors have) he wants to finally see one of these fever dreams through

Contrast that with J.J.Abrams, who is the perfect auteur for the age of perpetual reboot, able to play with other people’s toys in ways both distinct and familiar. Of course, Abrams will be involved with this new Trek because even though he has now twice screwed over Paramount by playing the “childhood dream” card to direct Star Wars movies for a competitor he still has a multi-picture deal with the studio which needs to be honored. Plus, his production company is still in charge of the Trek film rights, and nothing seems to happening with that Star Trek Beyond sequel right now. It doesn’t hurt anyone to take a meeting.

I could see a scenario where Tarantino acts as a consultant, maybe ends up with a story by or producer credit, but lets somebody else write and direct. That is if this latest “Tarantino apparently has an idea for [insert name of geek franchise]” story amounts to anything.

What is his idea, exactly? Dunno, but here’s what he told Nerdist two years ago:

You could take some of the great, classic ‘Star Trek’ episodes and just easily expand them to 90 minutes or more. And really do some amazing stuff,” Tarantino enthused. “The obvious one would be ‘City On The Edge Of Forever,’ that’s what everyone would go to, but there’s a reason why everyone would go to that. It’s one of the classic stories of all time, and one of the great time travel stories. However, in thinking about that concept even further though, I think one of the best ‘Star Trek’ episodes ever written was for ‘Next Generation’…’Yesterday’s Enterprise.’ I actually think that is one of the great, not only space story, but the way it dealt with the mythology. That actually could bear a two-hour treatment.”

If you don’t remember, “Yesterday’s Enterprise” is the episode where an act of kindness by Picard and crew toward a damaged ship inadvertently causes a massive shift in the timeline which plunges the Federation into century-long war with the Klingons. Guinan is the only one who notices. Tarantino loves the possibility of revisiting a storyline like that but with more depth:

“The whole thing with that episode [Yesterday’s Enterprise] that was so cool, they save the ship, but little do they know by saving the ship it’s actually in a different time period — but they don’t know that. But what ends up happening is — because they screwed up with the timeline, everything changes. The characters don’t know it, but we know it. And the thing about it is, it turns out that the Klingons and the humans on earth have been having this hundred year war that’s been going on, and it’s just the bloodiest war imaginable in the history of any universe.”

What do you think? Is Tarantino exactly the Trek superfan the franchise needs right now? Or the absolute the last thing it needs? Or who cares about the films anymore since Discovery is here? Just worried this might mean Beyond is the last we’ll see of the Abrams cast? Or are you more hyped for the season finale of The Orville than the idea of a Tarantino Trek movie?