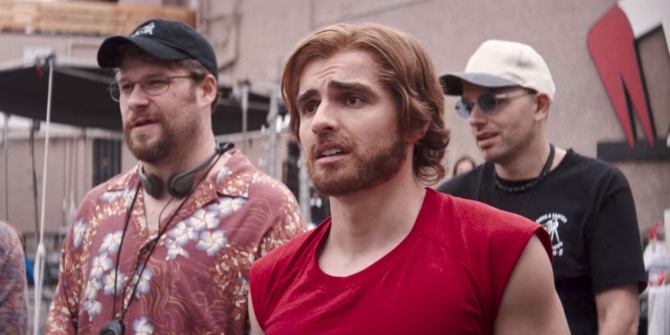 If you ask the average connoisseur of schlock cinema his opinion on the best bad movie, it’s highly probable The Room might be the response. Designed to be a Tennessee Williams-esque drama, the Tommy Wiseau directed, produced, written-by, and starring vehicle turned into a gloriously inept midnight movie sensation. The film supposedly cost in excess of six million dollars to create, but you’d never know it to look at the finished product. Instead, The Room feels as though every logical decision in the filmmaking process was scrapped in favor of the exact opposite. Plot strands are introduced and dropped almost simultaneously. Every single frame has a slightly off-center look, the result of Wiseau’s nonsensical decision to film on two cameras at the same time, one in 35MM format, the other in Digital HD. There are multiple sex scenes, each one almost nauseatingly lengthy. The lead character inexplicably has multiple framed photos of spoons on his walls, and in the end, we never even learn what The Room means. Is it a literal room or a metaphorical one? That’s part of the film’s enduring mystery.

Inevitably, the story behind the making of a film this historically bad has to be more fascinating than the actual film itself, which is where The Disaster Artist comes in. Adapted from The Room co-star Greg Sestero’s autobiography of the same name, Disaster Artist recounts the making of the film and Greg’s strained, co-dependent friendship with Wiseau. We are meant to laugh at the seemingly non-stop parade of poor decisions, like when Wiseau chooses to use a green screen for all outdoor scenes because that’s “real Hollywood filmmaking,” but also emphasize with the tortured artist behind the unmistakable disaster. That’s a tricky balancing act, yet Disaster Artist pulls it off, resulting in a film which plays like Ed Wood for the hipster generation. 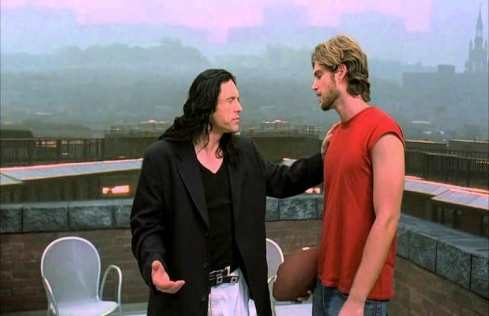 The film opens on Greg (Dave Franco) giving a timid, uninspired performance of Waiting for Godot in a small acting class. Greg’s not a standout talent. He has a conventional handsomeness that would probably catch a casting director’s eye, but not enough that he could command an audition through sheer charisma. Following an acting-teacher lecture about the importance of taking chances and being willing to lay your soul bare for the sake of the performance, Tommy Wiseau (James Franco, with slight prosthetic alterations to his nose), face hidden by long, stringy, black hair, takes the stage. He gives an interpretation of A Streetcar Named Desire’s iconic “Stella” scene so completely unhinged the class is forced into stunned silence. No one even knows what to say to him afterward. Except for Greg, who excitedly asks to be his scene partner.

Thus begins an odd, intense friendship between a man with all the confidence in the world but no discernible talent and a baby-faced kid with the right look, a modicum of talent but no confidence. Before long, the two are living together in Los Angeles and trying to make it as actors. Greg gets an agent and a girlfriend (Alison Brie) but no real success. Tommy flounders from audition to audition, becoming more and more frustrated with the business until Greg suggests they make their own movie. With that, The Room is born. 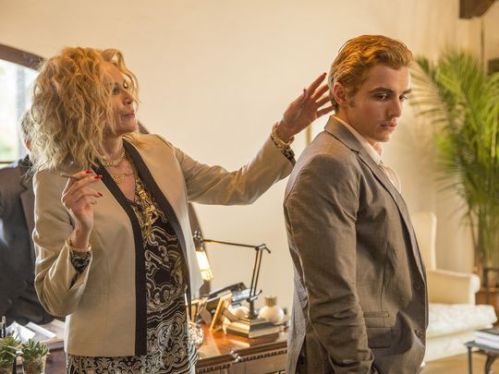 Adapted by Scott Neustadter and Michael Weber ((500) Days of Summer, The Fault in Our Stars), the Disaster Artist places much of its focus on the relationship between Tommy and Greg while cherry picking the best, most unbelievable moments from the making of The Room. The cast is uniformly strong (including supporting performances from Paul Scheer and Seth Rogen), but the film is really a two-hander between the Franco brothers.

Dave Franco’s Greg is the quieter, less showy role, but he crucially grounds the film’s absurdity. He has to make us understand why Greg would stick with Tommy, even when every impulse has to be telling him to run. Tommy, in real life and in this film, isn’t truly knowable, but as seen through Greg’s eyes he shows flashes of being a lovable, if also sometimes pitiable weirdo. Greg sticks with him out of loyalty and a sense of obligation, but he also shows us that even if life with Tommy is bizarre and sometimes infuriating, it’s also never boring and often fun.

James Franco gives himself the difficult task of fleshing out a character about whom almost nothing is known. He says he’s in his twenties, but he’s clearly at least twice that age. He claims to be from Louisiana but has an accent that somehow sounds both alien and vaguely Eastern European. He also seems to have an unknown and seemingly endless source of finances. It would be easy to make Tommy into a caricature, but Franco ensures there’s always some sympathy for Tommy’s madness. There are clearly major insecurities beneath Wiseau’s confident façade, and Franco keeps that sense of self-doubt ever-present. There’s a tragedy to someone so determined to make a brilliant, hard-hitting drama that everyone can see is a travesty. As funny as The Disaster Artist is (and it is. It’s very funny), there’s poignancy lurking beneath the surface. You laugh, but you feel a bit guilty for it. 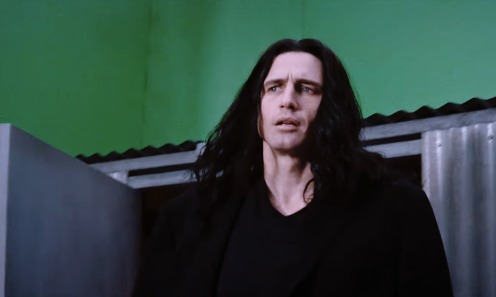 Tommy Wiseau, really,  is sort of the funhouse mirror version of James Franco. They are both tortured artists forever in pursuit of passion projects and at odds with how the world sees them. Tommy wants to be the leading man; James wants to be the eccentric artist cranking out Faulkner adaptations, gay porn dramas, and Lifetime movies while also teaching the occasional literature course at NYU, Columbia, UCLA, USC or whatever latest college he wants to visit. So, it’s obvious why Franco was drawn to Disaster Artist. He clearly sees himself in Tommy and has affection for his unique, oddball vision.

This is the same type of personal identification which led Tim Burton to make Ed Wood, his affectionate look at the mind behind some of the worst films in existence and the sincere relationship between its titular character and the aging, falling-into-obscurity Bela Lugosi. Both Wood and Wiseau believed they were achieving greatness, yet Wood (at least the biopic version of him) has an endless supply of optimism and enthusiasm. He’s charming and delightful. Sure, he can’t direct, but that’s almost beside the point when there’s so much obvious love for the world of filmmaking. Wiseau, by contrast, oscillates between endearingly strange and exceedingly cruel. There are moments of chaos on the set that stem completely from Tommy’s short-fuse temper and his inability to cope with his disintegrating relationship with Greg. As the shoot drags on and Tommy becomes more and more aware he’s seen as a joke, his cruelty and spitefulness increased.

There’s as much a parallel to Billy Wilder’s Sunset Boulevard, with Tommy’s Norma Desmond slowly warping the perceptions of Greg’s Joe Gillis. Tommy has an obsessive interest in Greg, resentful of any relationship or job offers that exist outside of Tommy’s sphere of influence, and Greg is obligated to play along, partially because he appears to be financially dependent on Tommy. The movie never explicitly puts out there that Tommy is in love with Greg, but the subtext is undeniable. At least Greg doesn’t end up face down in Tommy’s pool. There’s a fine line between a supportive friendship and a destructive, co-dependent one, and the relationship between the two leads blurs that line on a constant basis.

However, it’s also obvious there’s genuine affection keeping them connected to one another against all sense and reason. It’s that relationship that gives the film its emotional center. If The Room is meant to be Wiseau’s statement about his ongoing battle against the universe, The Disaster Artist is a tribute to the power of and need for friendship when the whole world seems to be conspiring against you. Tommy just wanted to be recognized and acknowledged, and The Disaster Artist never lets the viewer forget that.

As someone who has attended one of those infamous The Room midnight showings, Disaster Artist actually leaves me feeling conflicted. See, truly entertaining bad movies like The Room usually involve a passion project, backed by someone with more enthusiasm than competence. There’s the sense the mind behind the camera is bearing his soul, trying to say something personal about himself. The enjoyment, and to some extent the tragedy, is the vastness between expectation and reality. We’re laughing at someone’s epic failure, but in The Room’s case, we’re also laughing at someone’s life. 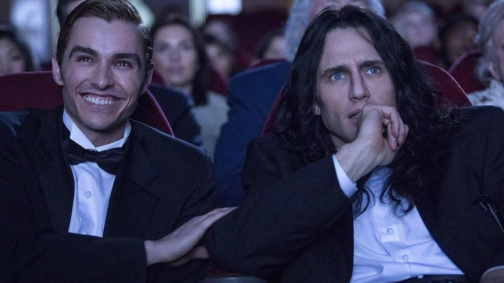 As The Disaster Artist briefly touches on, it’s not entirely clear how comfortable Wiseau actually is with his deeply personal passion project becoming famous for being terrible. Even as I’ve watched The Room and laughed at its ridiculousness, I feel a bit of guilt for engaging in the mockery of something made with such sincerity. The Disaster Artists could so easily have merely indulged that laughter, yet it finds a way to both make us laugh and celebrate Tommy and Greg’s friendship and their regrettably artless pursuit of fame.

There’s some question as to whether or not The Disaster Artist can be enjoyed by someone who hasn’t seen The Room. I think it can, but there are certain in-jokes that will go over your head. It might also leave you questioning if anything in the film has been exaggerated, which The Disaster Artist attempts to address through a closing credits scene showing side-by-side comparisons of its shot-for-shot Room recreations versus the original scenes. It’s amazing how much care and detail went into reconstructing a film that was so absurdly composed from the outset. Ultimately, I think if you see The Disaster Artist, you’ll want to see The Room. If you’ve seen it, you’ll recognize it as a love letter to a thoroughly entertaining train wreck.