By the end of the 80s, Steven Spielberg had made several films, most notably E.T., which reflected on his painful childhood experience of watching his parents divorce. He’d also made a break-up movie, infusing Temple of Doom with darker edges and traces of misogyny due to the lingering heartbreak he felt from the end of his three-year relationship with Kathleen Carey. George Lucas helped with that, of course, because he was going through a divorce of his own at the time. But that’s not something Spielberg could actually speak to. He was one of those kids of divorce who grew up telling himself he would never visit that same kind of trauma upon his own kids. When he married, it would stick and the family would remain unfractured. Thus, his movies could only ever be influenced by his childhood experience of divorce, not adult.

Or so he thought.

Then in 1989, Spielberg and Amy Irving divorced after nearly four years of marriage and having a son together. Later that same year, he released Always, a movie about the ghost of a woman’s former lover first preventing her from moving on before finding closure together. It’s quite famously one of Spielberg’s worst movies, but it’s on Netflix right now and I’d never seen it before. Plus, it fits into my current kick of checking in on some of Spielberg’s prior sci-fi films to celebrate the release of Ready Player One.

Yeaaaaaaah….this movie’s actually worse than I expected. It’s miscast, tonally challenged, painfully unfunny, and one of the most blatant examples of Spielberg using sentiment as a crutch instead of a legitimate storytelling device. It feels like something produced by a 12-year-old who can’t get enough of there’s-something-on-your-face gags but kind of thinks he understands romance thanks to all the movies he’s seen, except now he’s an adult working through some shit. Which is exactly what it is:

It’s Spielberg remaking a movie (1943’s A Guy Named Joe) he loved as a child at a time when his parents were divorcing, but he happened to remake it exactly as he was in the process of divorcing Amy Irving. You can see why it spoke to him at that time, but a romantic melodrama is just not a genre he’s suited for.

But, hey, you do get to see Spielberg direct Audrey Hepburn in her final film role. So, there’s that.

Always details the death of a hotshot, not-ready-to-commit aerial firefighter (Richard Dreyfuss’s Pete Sandich) and his ghostly return to Earth to check in on the woman he left behind (Holly Hunter’s Dorinda Durston) and the new man (Brad Johnson’s Ted Baker) she fancies. It’s pitched in the same absolute and never-ending romantic terms of its 1943 Hollywood source material, but due to some unfortunate casting and scripting it more comes off like a dickish dude using the afterlife to prevent his ex from having her first rebound lay.

We first meet Pete in his plane as he’s performing one dangerous stunt after another while delivering fire retardant slurry to put out a forest fire. Dorinda, back in the control tower, stresses over his safety as does his buddy Al (John Goodman). Yet Pete always seems to get away with it, such as when he just barely manages to land safely despite running out of fuel.

Fed up, Dorina commanders a plane of her own and does a quick run around the airfield before performing her own dangerous landing, either to show Peter how it’s done or just what it feels like to see a loved one flying so recklessly.

I’m not actually clear on the point of it. That’s probably because what happens after that is such a mind-bogglingly terrible sequence of events that I could hardly believe my eyes.

Pete, Dorinda, Al, and the rest of the aerial firefighting crew (made up mostly of extras from the area) head to a bar where this happens:

Please excuse the lack of dialogue in the above clip. It’s been edited by a YouTuber to be more of a music video, but it’s the only version of the scene I could find.

Through some rather forced screwball banter between Pete and Dorinda, we quickly pick up on the nature of their pairing, which is mostly that they playfully bicker, laugh, and dance together but she’s the only really trying in the relationship. Even when he does try, such as buying her a fancy dress and shoes for her birthday, he gets the date of her birthday wrong, which she forgives because, well, that’s just him. But Dorinda loves the gift, confessing that though she’s a tomboy through and through she still likes “girl clothes” and grand, romantic entrances, such as when she descends down the stairs in her new dress only for all of the men to part in front of her.

Then, like something out of Seven Brides for Seven Brothers, everyone lines up to dance with her, but they’re all forced to clean up beforehand. While they’re doing that, John Goodman previews his future Blues Brother schtick for no good reason (the world had clearly been warned and sadly did nothing about it, thus paving the way for Blues Brother 2000). Everyone at the bar then takes a turn dancing with the pretty lady, except for Joe.

A relative stranger to most of them but an instant thirst-machine for any of the nearby ladies, Joe is a behemoth of a man, but also a simple-minded, gentle giant, only there because Pete hired him to sing Happy Birthday to Dorinda. More than a little threatened by Dordina’s instant and obvious attraction to Joe, Pete squirrels her away for a romantic evening that ends up feeling more like a sleepover between friends or siblings than lovers.

So, our love triangle is set – Pete, Dorinda, and Joe – and there isn’t an ounce of chemistry between any of them, regardless of their best efforts. Well, that’s not quite true. Hunter manages to make Dorinda’s obvious lust for Joe seem believable, but her deep, unabiding love for Pete never registers nor do her subsequent similar feelings for Joe after Pete’s inevitable death via plane crash. Dude can’t defy the odds every time.

Moreover, this dance sequence previews Always’ bizarre intention to veer wildly between sentimental romance and broadly, cartoonish humor. For example, much later in the film Joe, with unseen ghost Pete in tow, follows a runaway, unmanned forklift (don’t ask) on the tarmac simply because it has a sign reading “Follow Me” on the back. You can almost hear Spielberg laughing from behind the camera but just wish someone had told him how unfunny it is. The confusion Joe feels at first is understandable, but it goes on for longer than it should, suggesting Joe clearly lives in the 30 Rock “handsome bubble.” He’s just too handsome for the world to ever tell him how dumb he is.

The transition Joe undergoes into a hotshot pilot thanks to Pete’s tutelage is mostly unbelievable and seems to happen as if we’re missing an entire reel where he makes gradual improvements. Instead, there’s a fair bit of Pete just messing with Ted because it amuses him. How is there not a montage in this movie of Ted continually failing much to Pete’s eternal frustration before reaching a breakthrough moment?

It’s largely because once Dorinda re-enters the picture, having mourned Pete for a year at that point, Ted ceases to matter as a character even though he’s still getting plenty of screen time. The story’s focus shifts to Pete and Dorinda’s mutual need, but inability to let go and move on. Perhaps not surprisingly, this is actually where the film is at its best. The bond between the pair still feels more familial than erotic or passionate, as Dreyfus and Hunter just can’t find a spark, but the sense of loss feels honest and not as cloying as it later becomes. The loveliest moment in the entire film is simply the pair dancing to their old song, even though she doesn’t know he’s there:

It all leads to a climactic rescue sequence, which is more than capably filmed – really, all the airplane sequences are – but also hopelessly sentimental. It’s the ending of a film that just doesn’t work and leans hard into the director’s comfort zone to compensate, and with the right cast maybe it would have worked. But the romance is unromantic, the central couple more brother and sister than lovers, and the third party an underwritten and underperformed doofus. Because it’s Spielberg it’s still watchable but just barely

Always’ well-earned reputation as one of Spielberg’s worsts certainly precedes itself, and I’m not going to offer a contrary opinion or some “Always is Seriously Underrated” hot take here. No, the movie is one of the most forgettable and thus easily skippable in Spielberg’s entire filmography, up there with The Crystal Skull and Hook. Unless you’re a completist or an avid fan of shamelessly sentimental tearjerkers, there’s little reason to watch Always. But if you happen to be a huge Quantum Leap fan you might at least be interested to see the movie that probably inspired Al’s heartbreaking dance with Beth. 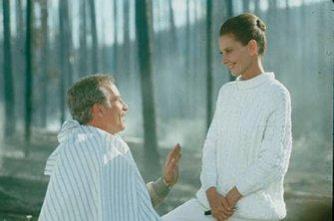