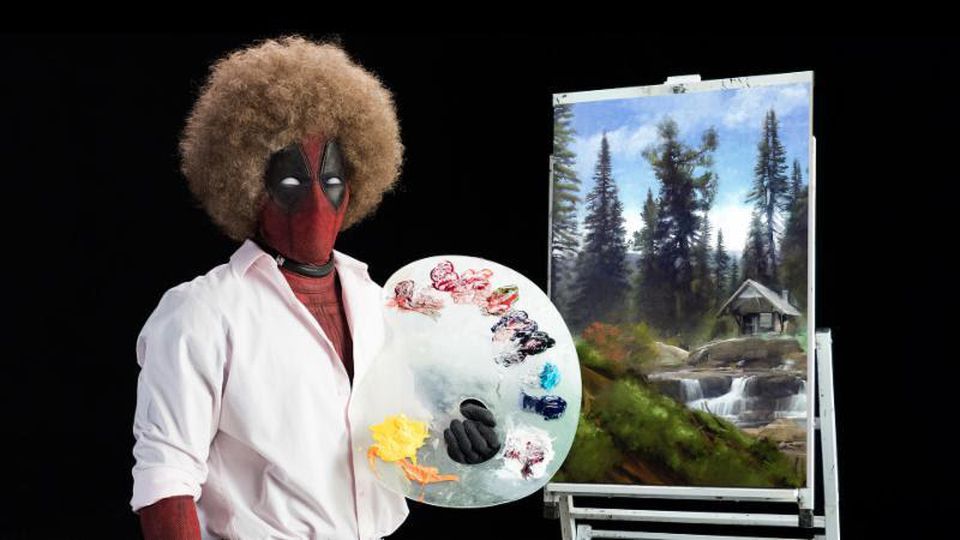 We all know that, just as we know Chris Evans isn’t really Captain America and Henry Cavill can’t fly. But, with Deadpool it’s been surprisingly easy to forget. Reynolds and 20th Century Fox’s marketing department – incidentally, those same people all set to be fired once Disney takes over – have taken Deadpool’s fourth-wall-breaking, Bugs Bunny persona from the comics and applied it to all manner of media. Print advertising, film trailers, TV commercials, music videos, talk show appearances, YouTube, Twitter, Wal Mart Blu-Ray displays, even Tinder – it doesn’t matter. Wherever we turn, Deadpool’s self-aware face is staring at us – well, his mask is staring at us, but his face is presumably flashing a shit-eating grin underneath – and deconstructing the very idea of film advertising.

He’s the ghost in the perpetual hype machine, and part of that hype has meant all of us playing along with the idea of Deadpool being real and not entirely fictional. That’s okay. We’ve been doing that for years now, like when Honest Trailers played along and allowed “Deadpool” to crash the following video:

So, it’s only naturally for Stephen Colbert to let “Deadpool” take over a recent Late Show monologue and lob some Trump jokes:

Imagine the disappointment, then, when Deadpool 2 finally arrived and turned out to just be a movie (check out Julianne’s spoiler-free review). Sure, it’s an undeniably funny movie with a thin plot, questionable treatment of female characters, inspired action scenes, pop culture and meta jokes galore, and one of the greatest post-credits scenes ever, but it’s still just a movie. The superhero deconstruction on display in the actual film is nothing compared to the months if not years of Deadpool 2’s deconstruction of superhero film advertising.

That presents a bit of quandary: Is it possible Deadpool 2’s advertising is actually funnier than the film itself? In the advertising, Reynolds has been freed from the constraints of plot, emotion, or any discernible character arc – ya know, all of those pesky little things an actual movie has to bother with. That means he spent a good chunk of one of the trailers playing with action figures like the overgrown child he is and hanging a lantern on the fact Josh Brolin’s metal arm in the film is entirely CGI meaning the actor simply wore a neon green sleeve over that arm on set.

By comparison, when that same specific scene of Cable displaying his metal arm while grenading his way through a prison happens in the movie it plays out in super intense, action-heavy fashion. Deadpool, of course, cracks a couple of jokes, most notably his hilarious “Aw, you’re so dark. Are you sure you’re not from the DC Universe?” quip, but the film has to play things fairly straight considering the importance of the sequence to the overall plot. Deadpool and Cable meet and fight for the first time and Deadpool learns Cable is after Russell, not him. Russell overhears Deadpool say he doesn’t care about him, thus setting him to go join Juggernaut.

Blah, blah, blah…super important plot stuff. So, no, the movie can’t just stop to let Deadpool play with toys or elaborately point out the artifice of it all. There are plot demands to be met, emotions to be paid off. That teaser, on the other hand, mocks the very idea of plot, in more ways than most people realize. You’ve probably seen the teaser before, but did you ever read the fake plot description Fox provided with it on YouTube? Because this part’s truly inspired:

“After surviving a near fatal bovine attack, a disfigured cafeteria chef (Wade Wilson) struggles to fulfill his dream of becoming Mayberry’s hottest bartender while also learning to cope with his lost sense of taste. Searching to regain his spice for life, as well as a flux capacitor, Wade must battle ninjas, the yakuza, and a pack of sexually aggressive canines, as he journeys around the world to discover the importance of family, friendship, and flavor – finding a new taste for adventure and earning the coveted coffee mug title of World’s Best Lover.”

Deadpool, the film character, is a more fleshed out person with a broken heart to mend and impossibly immature impulses to satisfy. Deadpool, the self-aware franchise mascot, is just pure impulse and punchline. He gets to crash a rather serious Celine Dion music video and dance about in mock-sadness before admonishing her for bringing far too much heart. “You’re at an 11. This is Deadpool 2, not Titanic. We need to get you down to a 5, 5.5 tops. Just phone it in,” he hilariously commands.

Deadpool, the mascot, gets to spend film teasers dressed as Bob Ross getting high on paint fumes…

He can flat-out mock a rather insane-sounding, but very real product tie-in…

Make the cover of Good Housekeeping to be a “naughty little stocking stuffer” letting out his holiday cheer: 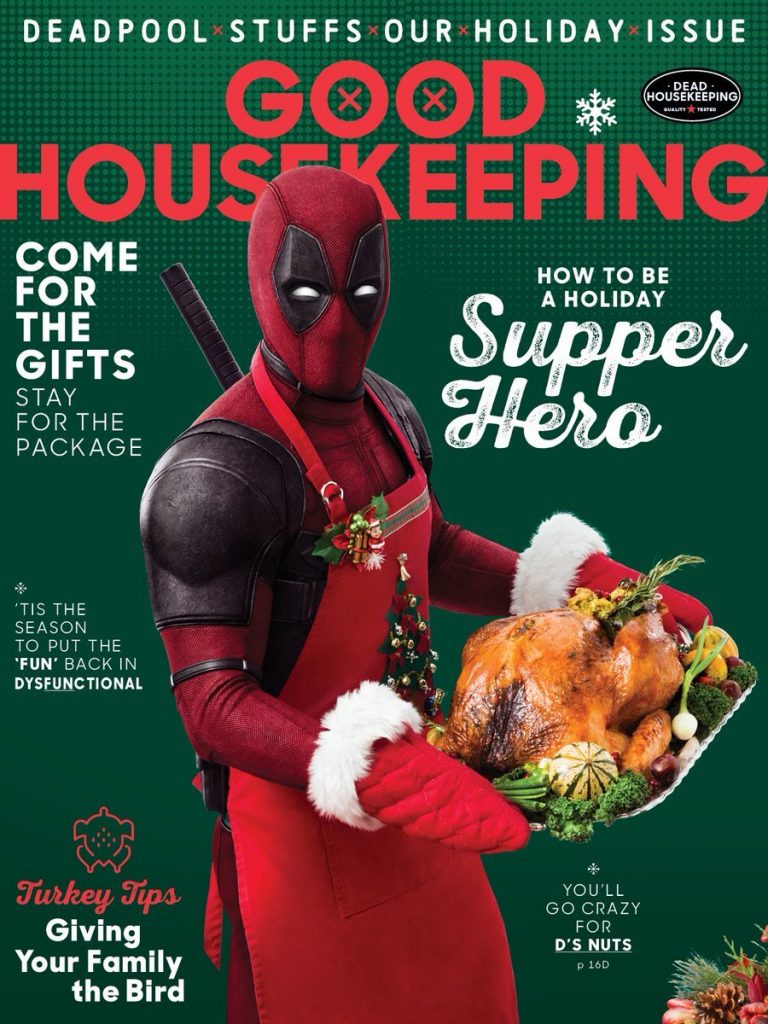 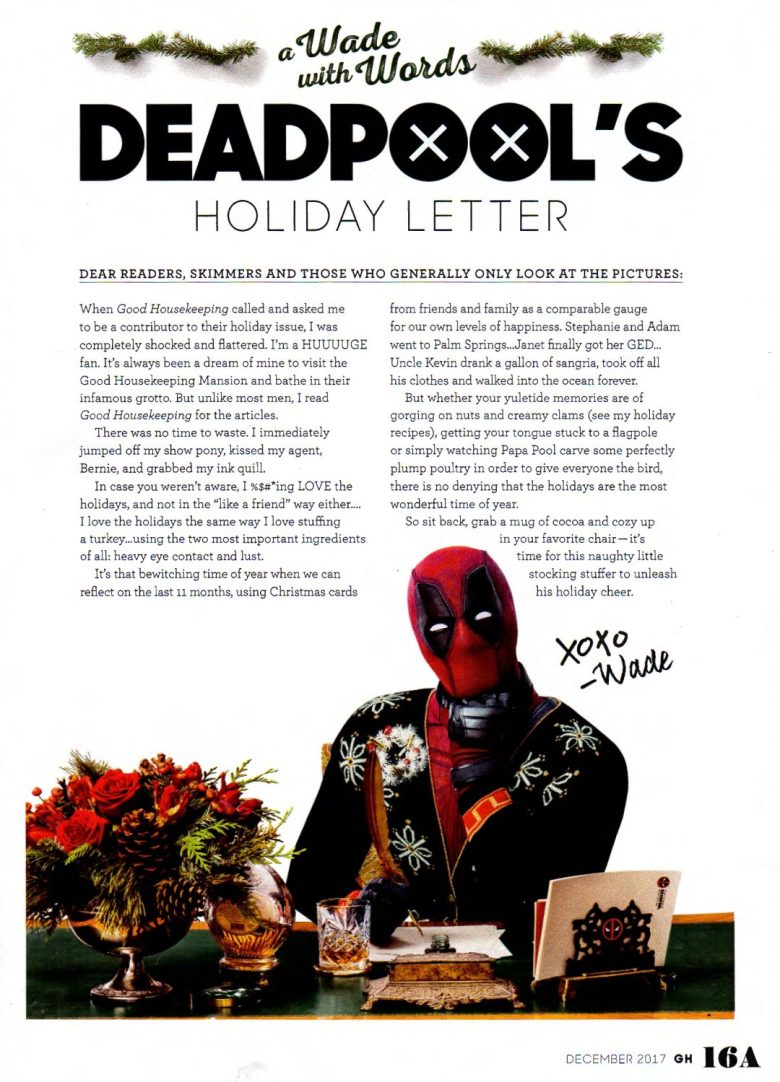 Just hang out with David Beckham:

When you’re trying to record a heartfelt birthday message …. but are interrupted by the least greatest showman. @VancityReynolds pic.twitter.com/RwlE4IXFX1

Deadpool, the film character, has to mourn Vanessa, struggle to find his own makeshift family, and ultimately set-up an X-Force movie. Even with Deadpool 2 ingeniously killing off the first iteration of X-Force with astonishing swiftness, there’s simply nothing as rule-breaking in the film as there has been in the film’s advertising.

Reynolds and Fox have redefined what mass advertising campaigns should (or at least can, depending on the individual film in question) look like in 2018, especially considering our collectively improving awareness of all the old tricks the film studios like to use. As a direct result, the trailers I saw in front of Deadpool 2 last night included a recurring bit where a self-aware, Benedict Cumberbatch-voiced Grinch interrupted the space in-between each trailer to demand the theater just play the freakin’ movie already. Of course, that in and of itself was its own form of advertising since there’s a new Grinch movie due soon, but that ingenious tactic made The Grinch’s advertising people seem far more on their game than their competitors rolling out the tried-and-true traditional trailers.

Come November, though, The Grinch will just be a movie, same as Deadpool 2. However, these days Hollywood doesn’t want movies; it wants events. Deadpool 2’s marketing has been an event like no other in film history, to the point that it has been (and will likely continue to be) even more interesting than the film itself.

So, what do you say? What has been more fun to this point, all of the Deadpool 2 marketing or the actual movie? Let me know in the comments.

Source: For a rundown of some of the other Deadpool 2 marketing stunts, check out this list at The Verge