Walking into my screening of Deadpool 2, I had some trepidation. After all, 2016’s Deadpool worked because it felt so fresh and different from every other superhero film surrounding it on the release calendar. Much of its charm stemmed from its gleefully R-rated novelty. Granted, it wasn’t quite the superhero deconstruction it was made out to be, and there have been other superhero films both before and since (Looking at you Guardians of the Galaxy and Thor: Ragnarok) that picked apart the genre’s’ inherent goofiness. Deadpool might have commented on X-Men’s complicated timelines and reasoned that its paltry budget was the real reason there were no real notable X-Men hanging around Xavier’s mansion, but the film still maintained the skeletal frame of a standard superhero origin story. It just hung more viscera and pop culture, fourth-wall-shattering gags around its edges.

This led me to wonder if a Deadpool sequel would even work when much of the first film’s success had to do with the shock of seeing its Monty Pythonesque carnage and anarchic, sadistic humor. As it turns out, I needn’t have worried.

I knew I was in good hands when the film opens on a music box featuring a spinning Wolverine impaled on a tree and claims to be directed by “One of the Guys that Killed John Wick’s dog” (David Leitch, actually). Deadpool 2 plays in Deadpool’s sandbox, but it blows that sandbox to smithereens and makes plot strands out if its scraps. Its budget is bigger, meaning it can now afford those massive shootouts and explosions the first film had to work around. That makes it feel more of a piece with the bigger studio films towards which it’s gleefully hurling spitballs, but the film is too consistently funny to mind its inherent cynicism.

Without getting into major plot spoilers, Deadpool 2 opens with its titular Merc with a Mouth (Ryan Reynolds, as if you needed to be told) slicing through bad guys in increasingly outrageous fashion, making R-rated Bugs Bunny jones along the way.

A tragedy leaves him reeling, and his cackling at the darkness shtick begins to feel more like a desperate attempt to bury trauma. There’s an even stronger, underlying tragedy to his wounded jester style. The film practically bathes itself in flop sweat trying to maintain the delicate balance between manic, postmodern gags and a character wallowing in a state of traumatized depression. After all, now he’s a character who wants to die, even though he really, really can’t. Deadpool 2 is darker, grimmer ride, which considering the first film’s cancer plotline and extended torture sequences is really saying something.

For me, at least, the film is mostly successful at walking that tonal tightrope. I laughed at the jokes and emotionally engaged when the film wanted me to do so. As Deadpool himself states, his first film was a romance, and his sequel is a family film. It’s a family film with child abuse, comically gruesome death scenes, and dick jokes galore, but it’s about creating a makeshift family from whatever misfit scraps you have to find laying around outside the misfit mutant factory.

You see, Deadpool finds himself drawn to helping a young, reckless mutant who goes by the name Firefist (Hunt for the Wilderpeople’s Juliane Dennison). He’s capable of…well, he’s called Firefist. What do you think he can do? 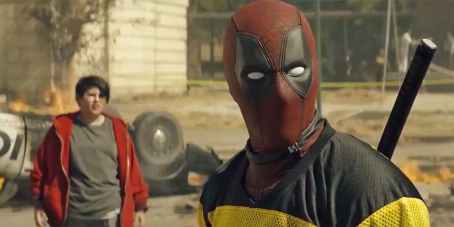 He’s being abused by a school headmaster (Eddie Marson) straight out of a Dickens novel, and he’s at risk of going to the dark side. A cybernetic soldier by the name of Cable (Josh Brolin, who decided that one role in the Marvel world just wasn’t enough) travels back in time to kill Firefist before he can win a war against the machines. Oh, wait. Sorry, that’s Terminator.

I’d love to act as if that pop culture connection is mine exclusively, but that’s the thing about Deadpool (and Deadpool). You’ll never get the chance to make a cultural reference before he does. The film is a whirligig of cultural allusions ranging from the expected  DC and the Marvel Cinematic Universe jokes to Interview with the Vampire and Say Anything references.

With its emotionally damaged lead and his need to connect with a mutant who could go to the dark side without proper nurturing, Deadpool 2 plays like the sarcastic, quippy thematic cousin to Wolverine’s swan song, Logan. You half expect Deadpool to tell Firefist, “Don’t be what they made you.” Instead, every time it appears as though it might tip too far into sentiment for a film whose tongue is so firmly planted with its cheek, the emotions are undercut by a sight gag or a genre-skewering quip and the balance rights itself.

Deadpool begins the film on a vengeance quest and eventually finds himself trying to stop Cable, who emerges as his grimmer, more frustrated counterpoint from undertaking the same brand of vengeance, as Cable’s trying to keep Firefist from killing people who are important to him. Deadpool, by contrast, would like to give the kid a shot at redemption and he’ll fight Cable to give Firefist that chance. To do so, a cadre of mutants are assembled. The metallic Colossus (Stefan Kapičić) is back to play Jiminy Cricket to Deadpool’s Pinocchio, as is Briana Hildebrand’s jaded Negasonic Teenage Warhead.

Ultimately, Deadpool 2 has its flaws. Its sentimental heart might slightly undercut its satirical edge and there are logical inconsistencies I could pick apart if I really wanted to. However, here’s the thing: I don’t want to. I laughed too consistently to be angry or nitpicky towards the film. The jokes land too well and the moments that expose its sweet underbelly land more effectively than they have any right to. Much of the film’s success is due to Ryan Reynolds, a charismatic actor that effortlessly shifts between mocking sincerity and actual emoting in a way that doesn’t cause whiplash. It’s also due to the incredibly sharp script he helped co-write with Rhett Reese and Paul Wernick, that recognizes how to balance two distinct, polar opposite tones that should never actually go together but somehow sort of do. It may lack the pleasant surprise of the film that came before it, and it feels a bit closer to the big-budget superhero films it continues to mock, but its humor remains as sharp and wisecracking as ever.