For a hot minute, the Oscars were going to have a Best Popular Film category this year. That didn’t end well for anyone. We’ve since learned the category was largely ABC’s idea. They do air the Oscars, after all, and overall viewership has been plunging faster than Trump’s approval rating, reaching a record low 26.5 million viewers in 2018, a 40% decline from just 4 years ago. For so, so many reasons, proposing a Best Popular Film category was the wrong solution, but the problem which inspired it is very real.

Or so I have argued in the past. In fact, this recent Hollywood Reporter headline would have been Exhibit 1 in my argument about the existential crisis hanging over the Oscars right now:

The gist of the article is right there in the headline: In a “nationally representative poll of 2,201 adults,” THR found that only one in every five Americans can correctly identify The Shape of Water as last year’s Best Picture winner. That might seem bad, but it’s actually better than usual because in the same survey THR discovered:

I am Jack’s complete lack of surprise.

This whole “the Oscars are clearly out of touch with the average American” business is an annual tradition now. Today, THR looked into how many people actually remember the last five Best Picture winners. Two years ago – when the Oscar field consisted of films like Arrival, Hacksaw Ridge, Hidden Figures, Manchester By the Sea, and, of course, La La Land and Moonlight – they asked how many people could at least name a single Best Picture nominee. The answer then: just 40% of respondents. Optimistically, THR pointed out that despite the clear lack of familiarity with the nominees 70% of the respondents still said they intended to watch the Oscars.

Based on the ratings, safe to say some of them were lying or ended up watching in a way not reflected in the numbers, like maybe in a group setting or streaming online.

But what’s that old saying? “In this world, nothing can be said to be certain, except death and taxes.” Well, amend that for cinephiles and replace “death and taxes” with “arguing about the Oscars.” This – puzzling over the ratings, debating how to fix things, second-guessing the winners and nominees – is just what we do as film fanatics. It’s utterly pointless. At the end of the day, who gives a shit who wins Best Picture?* And I say that as the film nerd who once proudly memorized the name and corresponding year of every Best Picture winner like it was a school assignment I was going to be tested on.

*Counterpoint: Yes, I’m aware of the new approach to treating every Best Picture win as a cultural signifier and platform to advance social justice – Moonlight for gay, black men, Spotlight for the abused, Shape of Water for all outsiders. However, with fewer people watching the Oscars and most Best Picture winners making less in totality than the average Marvel Studios movie does in its first two days I don’t know how much of a significant difference we’re actually making here. Oprah’s #TimesUp speech at the Golden Globes, on the other hand, or Frances McDormand’s “Inclusion Rider” speech at last year’s Oscars…now we’re talking true change. 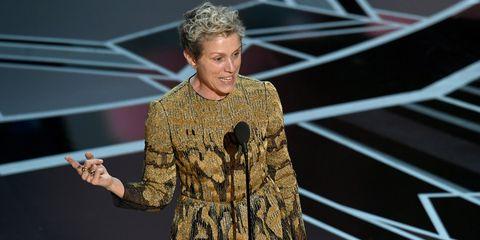 A trophy does not a great movie make. In reality, standing the test of time is the only true arbiter of a film’s greatness. However, this is our Super Bowl and arguing about it unites us as film fans.

There are simply fewer of us doing that now because, in general, there are fewer people watching awards shows, period. I’d give you the specific numbers, but this GIF sums it up pretty well:

Ok. So, that doesn’t work here as well as I thought it would. For some reason, I remembered Ozzie Smith’s journey through the bottomless pit being more like a straight fall downward instead of that weird spiral but, frankly, I’ll use any excuse I can to talk about The Simpsons’ “Homer at the Bat” episode.

The point is: imagine a cliff. Now imagine yourself falling off of it. That’s the story with the ratings for all award shows these days (THR has the numbers).

To paraphrase another great movie the Oscars failed to properly recognize, the TV industry went and got itself in a big damn hurry. Now, even live programming is no longer immune to the streaming and time shifting revolution. ABC and the Oscars are trying everything they can think of to stop the bleeding, and the further the public drifts away from the Oscars the less power it will have as a cultural institution.

But isn’t this kind of unavoidable? You can add thousands more diverse members to the Academy. You change the rules and categories to encourage support of more popular movies. You can even partially succeed by occasionally managing to nominate a movie or two which crossed $100m domestic, like last year’s Dunkirk and Get Out.

However, you can’t change the larger trends in the industry, the ones where the unholy cocktail of conglomerate control, global box office whims, and market saturation has resulted in the death of the mid-budget movie, unending age of the blockbuster, and mass exodus of filmmakers and stars who would have been winning Oscars in an old age but are now making compelling TV shows instead. It’s perfectly fitting, then, that this year’s presumptive Best Picture winner, Roma, is something the overwhelming majority of people will have watched on Netflix.

That doesn’t mean you don’t try; it just means you be honest with yourself about the challenge. That old version of Hollywood where Best Picture winners were usually mid-budget movies, the occasional blockbuster, or just generally movies a lot of Americans actually paid to see and then tuned in to the Oscars to see win or lose? That’s not coming back, and it’s not like they didn’t snub blockbusters back then, either.

Similarly, any elitist notion about Best Picture representing the greatest achievement in cinema started slowly dying the year The Sopranos was created or all those times the Academy awarded Best Picture to what history later judged to clearly be the wrong movie.

So, given the current playing field the movies which most need the Oscars are the smaller ones just trying to cut through the cultural chatter and actually make some money instead of simply winning awards only to then see its distributor go out of business two years later, as happened with Birdman and Spotlight. However, ABC and the Oscars, faced with plummeting ratings, would clearly prefer to move toward recognizing the kinds of movies most Americans will actually remember a couple of years from now.

But as the rapidly shifting face of TV deems awards shows to be less and less relevant (especially as there are oddly more and more of them) an inevitable dwindling effect will kick in where, in the end, the most passionate will remain. #FilmTwitter arguments will be had. Awards show GIFS will be widely shared. And, as we always have, we will continue arguing about who should have won what or who looked best in what dress or suit. It’s what we do. It’s an annual tradition. There just might fewer of us partaking in it in the years to come.

2019 will be the ultimate test of that. We’re potentially looking at the most financially successful group of Best Picture nominees in recent memory. Black Panther, A Star is Born, and Bohemian Rhapsody, for example, are each among the highest-grossing films of all time for their respective genres. Lady Gaga might win Best Actress, and that’s going to demand the attention of her massive fanbase! Traditional logic would suggest that’s going to equate to more viewers. ABC is sure hoping so.

Smash Cut to a year from now: New THR survey discovers the average American believes A Star is Born won Best Picture last year even though it went to Roma.

If they actually watch the show, though, what does it matter? And if not, there will always be hardcore cinephiles duty-bound to watch or at least maybe watch the highlights because of tradition. Whether or not the tradition ever takes hold with the younger generation, though, well that’s a possibly unavoidable problem for 10 years from now.