Netflix spent $13 billion on content in 2018, yet before yesterday its cheapest subscription price was a mere eight dollars a month. A price hike was inevitable, but it speaks to what might just determine who wins the streaming wars: who can best withstand long-term debt?

That’s been the culture clash playing out in the film and TV biz ever since Reed Hastings refused to pay a video store late fee for Apollo 13 and decided to create to something called Netflix.

That story, oft-told in the Netflix mythology, is total bullshit. Netflix’ more banal origin story, as spelled out in Gina Keating’s book Netflixed: The Epic Battle for America’s Eyeballs, mostly involves co-founder Marc Randolph just needing any kind of product to test his theory about how the internet could supercharge a direct mail operation. The DVD happened to be brand new at the time and seemed like it would be easy to send through the mail. The lie they’ve told about their origin, however, illustrates a larger truth:

A younger, more tech-inclined generation saw the inequalities in the old ways of doing things and used the internet to create a solution. The Silicon Valley way of doing things trumped the old brick & mortar models, and now in certain industries, like film and TV, the two are awkwardly trying to co-exist.

Flash-forward to 2019 and Netflix, now the textbook definition for “industry disruptor,” just instituted the biggest price hike in its history. The fact that Netflix would raise prices is not shocking. They actually do it every 2-3 years and never seem to lose a significant number of customers over it. Plus, when Netflix is spending more on original content than pretty much all of the film studios combined and still makes the overwhelming majority of its money from subscription fees – its merchandising division is still developing – how can we really be surprised when they ask us to pay a couple more dollars a month now?

What everyone really wants to know is why they chose to do this now, especially since the looming competitors – Disney+ and whatever Apple, WarnerMedia, and Comcast roll out – have yet to set their introductory price points. By raising prices now, Netflix just made it easier for the competition to undercut them.

THR has a theory: “The timing is also interesting because it comes two days before Netflix announces its quarterly financial results. Could it be that Netflix wanted to make up for disappointing impending news by announcing positive news (for investors, not customers) now?” Variety disagrees.

Wired thinks the timing makes complete sense: “While Netflix this year will face down a more competitive landscape than it ever has, it’s important to maintain some perspective on just how big a threat all those new services pose, at least in the near term. Other than Amazon, no streaming service has come anywhere close to Netflix’s reach. It’s not just playing from a lead; almost no one else is even in the same stadium.”

Plus, as analyst Tony Gunnarsson told Wired, there is the company’s continued worldwide push and lower price points elsewhere – they’re experimenting with $4 mobile plan in Malaysia, for example – to consider, “We’re talking about markets like India, Southeast Asia, Africa, where Netflix as it stands today is unlikely to be able to replicate the success they’ve had in the Americas and Europe. It makes sense to slightly nudge up the subscription charge in mature markets to withstand lower prices that are a must in those developing markets.” 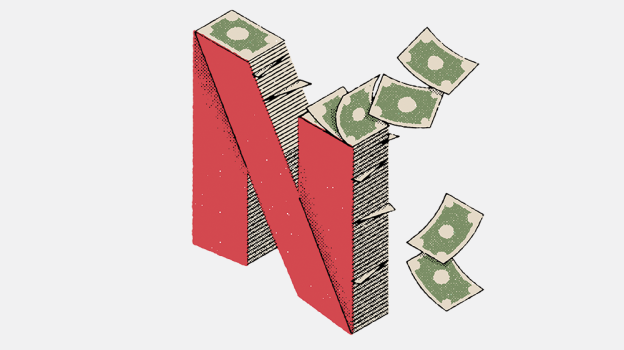 While some are puzzled and/or angered by the timing of the price increase others have been long since been calling for a price-hike for one simple reason: debt.

As I and others have written about in the past, Netflix’s unprecedented growth and investment in original content has been funded almost exclusively through debt-financing. I first looked into this in 2015, at which point Netflix’s long-term debt was $900 million. Today, it has skyrocketed up to $8.34 billion. This is largely why before yesterday Netflix’s stock price was down 30% from its peak last July.

Of course, last July is around the time Netflix CFO David Wells announced his departure from the company. In response, analyst Jeremy Bowman argued it was finally time for the debt-financing strategy to stop, “It would take the company more than six years to pay off its debt at current income levels. That ratio is significantly higher than Netflix’s broadcasting-based peers like Disney, and Netflix seems bent on borrowing even more as it foresees more years of negative free cash flow, which is likely to send the ratio even higher.”

The price-hike, thus, is longer overdue. Netflix’s official line is prices are going up because more revenue is needed to keep making so many movies and TV shows. The fact that this price hike has been announced after the success of genuine Originals like Roma and Bird Box and a purchased Original like You is no coincidence.

“We’re indispensable to your entertainment,” the Netflix salesman might say. “Don’t you want to know what everyone’s talking about on social media with their Bird Box and You memes? That comes with a price. Sure, it’s slightly higher than before, but still perfectly reasonable. This just means one less Vanilla Latte from Starbucks a month.”

If you thought Netflix’s debt was bad….

Of course, debt financing is a Silicon Valley staple. At last check, for example, we still don’t know if YouTube is profitable, and when the Securities and Exchange Commission looked into it last year corporate-owner Alphabet successfully got them to just let it go. That’s partially why movie theaters, film studios, and cable companies have been so vexed by Netflix and Amazon: how do you, as a traditional profit-and-loss conscious business contend with competitors who don’t have those same concerns?

The answer, at the corporate level, has been to scale up and accrue mountains of debt in the process. I mean, it’s cute that Netflix might have to worry about its $8.4 billion long-term debt. AT&T (after buying Time Warner & DirectTV) and Comcast (after buying Sky), on the other hand, now have debts of $170b and $114.7b. Plus, Disney (after buying 21st Century Fox) is more leveraged than it has been in a decade.

What happens if or when a recession hits?

Unclear, but the analysts Variety talked to are concerned:

“If there’s an economic slowdown or interest rates continue to rise, I’m not sure these companies will look back and think that it was such a good idea to pile on the debt,” says Hal Vogel, CEO of Vogel Capital Management.

As for the competition, unlike the leveraged financing used by Comcast, Disney and Fox, much of the money Netflix has borrowed is of the junk bond variety. That means that the cost of servicing the debt will fluctuate more wildly if interest rates rise.

“It can be a very painful experience for companies that are carrying a big debt load,” says Schuyler Moore, a partner in the corporate entertainment department of Greenberg Glusker. “People lend money based on a company’s theoretical equity value, but if the stock gets hammered, that equity cushion deflates as well.”

Now, giant corporations are trying to integrate newly acquired workforces into their system, launch new streaming services which must come with their own compelling original content if they are to stand out – all while paying off the debt it took to make all of that possible. Plus, every single one of them is planning to pull their content from Netflix once contracts expire, which means losing the millions in passive income Netflix has been paying them for years.

It, the competition would likely argue, is Netflix’s fault. Film studios have long since carried debt and struggled to actually turn a traditional profit. That’s nothing new. The way Netflix has gone about it is so unprecedented it has forced the competition to go a bit crazy. “The money Netflix is spending forces all the others who fight with Netflix to keep spending, spending, spending, and frequently that requires debt, debt, debt,” says Peter Csathy, founder of Creatv Media.

Now, the competition has to not only test how many streaming services the market can truly bare but also do so without the years of technical expertise and infrastructure Netflix has built up. Just imagine being a Disney engineer working on Disney+ the day after Black Mirror: Bandersnatch debuted. “Netflix can do live-action video games now? Oh, that’s just not fair!”

As long as Netflix’s subscriber numbers continue to grow, investors generally give them a pass on little questions like debt and profitability. There is some skittishness among the investors, sure, but the price hike seems to have calmed those nerves. Disney+ and the competition might not be granted a similar pass where their value is mostly determined in subscription numbers.

But, what else can you do? Netflix has set the terms. The Disneys and WarnerMedias of the world are stuck trying to catch up. If they succeed in these oncoming streaming wars, it will largely be because of debt; if they fail, the debt will be like the suffocating and seemingly endless amount of dirt keeping their coffin buried deep underground.