Last year, when the Academy announced its proposed Best Popular Film category, the lack of clarity was glaring. There were no announced guidelines for how films would even qualify for such a category, and we’ve since learned that’s because the Academy itself hadn’t figured that out yet. The internet, predictably, had a field day. Turns out, you actually have to put the work in and think that kind of thing through before announcing it the world.

Hopefully, Steven Spielberg, as one of the representatives of the directors branch of the Academy, realizes that. Because, as IndieWire reported last week, he wants to put a permanent end to streaming movies like Roma which don’t honor exclusive theatrical windows competing for Best Picture. However, it’s not at all clear how you actually do that without setting off a series of unintended consequences which could unfairly handicap indie distributors and radically reshape how the studios approach awards season.

“Steven feels strongly about the difference between the streaming and theatrical situation,” an Amblin spokesperson told IndieWire. “He’ll be happy if the others will join [his campaign] when that comes up [at the Academy Board of Governors meeting in April]. He will see what happens.”

Spielberg and his like minded Academy members, the report states, are disturbed by how much money Netflix spent on Roma Oscar campaigning. Which, fair. The total is said to be in the $25-$50m range compared to Green Book’s $5m.

More urgently, they feel threatened by the prospect of Best Picture potentially going to a streaming movie which only plays in a bunch of oddball indie theaters for a couple of weeks before going online everywhere around the world.

After the BAFTAs gave its Best Picture award to Roma, one theater chain threatened a boycott and another, CineWorld, pulled its support of the British Academy. Unless some rules are changed, you can be certain AMC and other North American chains will do the same should Netflix’s The Irishman win Best Picture next year.

One proposal on the table is to demand that any films hoping to qualify for Best Picture need to play in theaters exclusively for at least four weeks. That’s not an arbitrarily chosen number of weeks, either. No, it’s a direct fuck you to Netflix and Roma since the streamer put the movie in indie theaters for only three weeks before making it available to stream around the world. 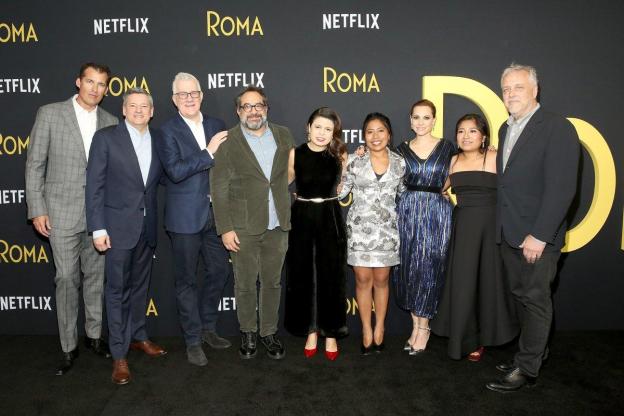 That was a huge concession on Ted Sarandos’ part since he’d previously attempted to simply meet the bare minimum requirement and put Oscar hopefuls like The Meyerowitz Stories in theaters in New York and Los Angeles for one week prior to streaming. As the rules are currently written, that’s all any movie has to do to qualify for any Oscar, not just Best Picture. Extending Roma to a three-week run in over a hundred theaters was a voluntary concession to the traditionalists in the Academy.

Now, Spielberg, who has been fretting about the impending end of the theatrical moviegoing experience for years now, wants to officially push the goal lines just a little further down the field. One ironic consequence, however, is two of Spielberg’s own recent Best Picture nominees – The Post and War Horse – would have been ineligible if forced to comply with a four-week window:

As major studio releases, they each honored the traditional windowing system wherein a movie begins its life in theaters for three months before filtering through home video and cable. However, they also each came out over Christmas, meaning they didn’t play for at least 4 weeks in the year in which they were released.

That’s not uncommon. We’re all family at this point with the movie awards season and the way all the presumably best movies are saved for the last two months of the year. It’s an annoying, imperfect system, one which is rapidly losing its efficacy since voters are growing increasingly more resistant to end-of-the-year Oscar bait. But studios plan their calendars around it and cinephiles look forward to it every year. Come Oscars time, at least one Best Picture nominee is something which came out in later December and often times didn’t expand wide until January.

So, how do you to punish Netflix without also punishing those end-of-the-year releases? Of the 89 movies to be nominated for Best Picture since 2009 – the first year in which the category was expanded to include 10 nominees, nearly a quarter (23%) of them would have been ineligible under the proposed rule change:

Much like the ill-fated Best Popular Film category, whatever Spielberg wants to do to force Netflix into complying with more traditional release windows needs a little more thought put into it.

“There’s a growing sense that if [Netflix] is going to behave like a studio, there should be some sort of standard,” one Academy governor told IndieWire. “The rules were put into effect when no one could conceive of this present or this future. We need a little clarity.”

That’s completely fair but beware the unintended consequences. If that much damage could be done just to the Best Picture category, imagine would become of the Foreign Film, Documentary, and less mainstream categories which sometimes have to rely on the one-week-in-a-theater rule.

Netflix, for now, isn’t backing down:

We love cinema. Here are some things we also love:

-Access for people who can't always afford, or live in towns without, theaters
-Letting everyone, everywhere enjoy releases at the same time
-Giving filmmakers more ways to share art

These things are not mutually exclusive.