Normally, when a sitcom makes it to a third season fans can rest easy. Networks are far more likely to cancel something after a first or second season but not a third. If you think of it all as one long marathon in which “rich syndication deal” is the finish line, a third season represents the halfway point of that race.

Netflix, however, moved up the damn finish line.

Santa Clarita Diet just became the latest Netflix Original comedy to get the ax after its third season. See also One Day at a Time and Love. On the one hand, boo! On the other hand, well, at least they got three seasons. American Vandal, Haters Back Off!, Lady Dynamite and Disjointed each only lasted two seasons.

The speculative reason for this: a third season and beyond is when backend royalties start kicking in and across-the-board salaries go up. Traditional networks with multiple revenue streams are better equipped to absorb the cost increase. Netflix, with its entirely subscriber-dependent model, would rather not deal with any of that.

At least that’s what THR thinks might be happening. The evidence is certainly there. Among all Netflix comedies, these are the only two notable shows to defy this rather curious trend: Unbreakable Kimmy Schmidt (which just wrapped its fourth and final season) and Grace & Frankie (which was renewed earlier this year for a sixth season).

Takeaway #1: I am suddenly very nervous about GLOW, which is now entering its third season. 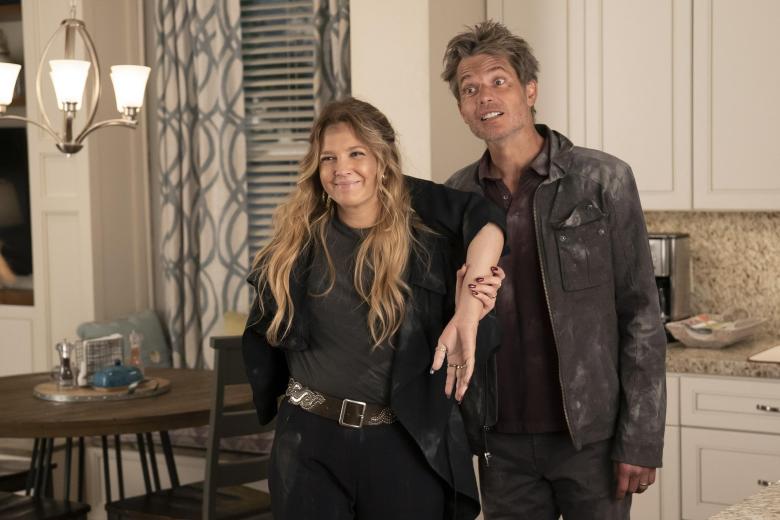 I probably wouldn’t have said that two years ago. The show – about husband and wife realtor duo Joel and Sheila Hammond (Timothy Olyphant, Drew Barrymore) tackling the triple joys of parenting, suburbia, and high-functioning zombiesm – has a significantly high zaniness factor.

Sample storyline: as Shiela stalks a group of neo-Nazi softball players to be her next victims, a barely-keeping-it-together Joel obsesses over wanting to build new shelves in their bedroom because if he doesn’t do something normal soon he’s going to absolutely lose it!

Such zaniness is showrunner Victor Fresco’s jam. It’s exactly the style of comedy he brought to cult classics Better Off Ted and Andy Richter Controls the Universe. However, Santa Clarita Diet saw him combining his fine-tuned sitcom writing with comically exaggerated bursts of violence, resulting in scenes in which a famished Sheila pounces on a victim – an evil victim, always, but still another human being – like a jungle cat while an increasingly exasperated Joel turns away with a manic “this is normal, this is normal, this is normal” look on his face.

To better explain the show’s set-up: Thanks to a mini-cure they eventually find, Sheila won’t deteriorate like a normal zombie nor will she lose any mental capacity. She still has to feed on others, though. Joel’s just her goofy, still very much human husband who wants to be supportive but also might end up going crazy in the process. Their acerbic, rebellious teenage daughter Abby (Liv Hewson) might just be the most adult member in the family, taking all of the crazy far more in stride than either of them. When it gets to be too much, she can always vent to neighbor and boy-who-is-madly-in-love-with-her Eric (Skyler Gisondo).

At first glance, I didn’t totally know what to do with all of that. In my mixed review for the first season, I remarked, “Beyond being good or bad or somewhere in-between, Santa Clarita Diet is above all else highly watchable, the type of comedy you’ll start, mildly enjoy and next thing you know you’ve watched 5 episodes in a row, all of them beating the same metaphorical joke into the ground over and over again”

In retrospect, I wish I could have been a more enthusiastic early adopter, but horror comedy is always a bit divisive and not everyone loves or even likes (domestic) sitcoms. Combine the two and then add in Olyphant playing entirely against type as a Father Knows Least doofus and you have a show which often mystified viewers. The four co-hosts of Blumhouse’s horror podcast Shockwaves, for example, were split down the middle after the first season and remain so now about whether the show is something they can get into.

I wasn’t fully won over until the second season, which introduced, among other things, Nathan Fillion playing a disembodied zombie head. (His character was in the pilot but hadn’t been seen since then.) I’m not saying this simple addition to the ensemble sealed the deal in winning me over, but it certainly helped tip the scale. More than that, though, I finally came around on Olyphant’s performance and his delightful chemistry with Barrymore.

Like most sitcoms in their second season, Santa Clarita Diet settled into a comfortable rhythm. With both a suspicious neighbor and a comically inept group of zombie hunters gradually circling in on them, Sheila and Joel had never been in more immediate danger, yet they remained joke delivery machines. The worst things got the funnier they became. The same went for Abby and Eric, whose ongoing flirtations, various spats, and hijinks mirrored Sheila and Joel’s. 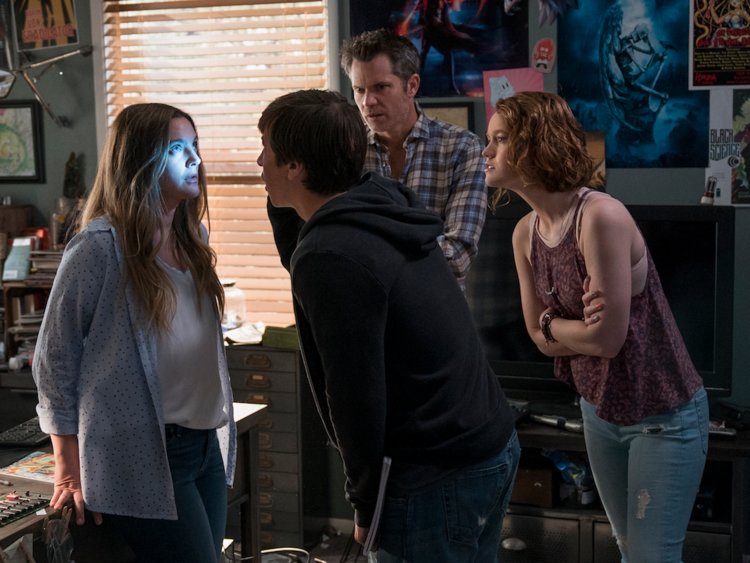 The recently released third season offered much of the same. Sheila gained a cult of worshippers as well as a new desire to use her zombieism for good. Joel wrestled with the decision of whether to let Sheila turn him into a zombie in order to turn their “till death do us part” vow into “till eternity do us part.” Abby and Eric freaked out over the aftermath of the tiny bit of eco-terrorism they perpetrated in season 2. In a wonderful bit of geek stunt casting, Fillion’s zombie head suddenly looked and sounded like Alan Tudyk, with the in-show explanation being the head’s voice box had fallen off.

The jokes still came at that familiar, machine gun pace. The heightened storylines metaphorically touched on issues like religion, intersectional feminism, the plight of the working mom, and trying to be a good person in a terrible world. Through it all, the Hammonds remained a family worth revisiting. 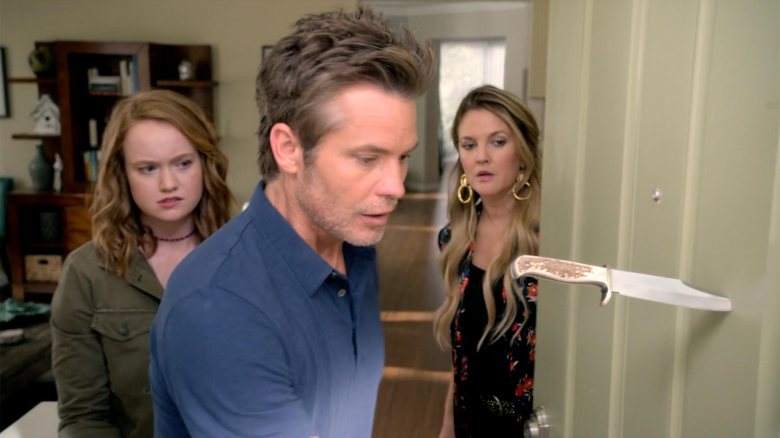 That is, however, if you could possibly find the time to watch. The third season dropped last month when we were all being absolutely pummeled by an onslaught of new episodes or entire new seasons from the following: The Magicians, Star Trek: Discovery, Veep, Happy!, Chilling Adventures of Sabrina, Now Apocalypse, Warrior, Brockmire, Fosse/Verdon, The Good Fight, Killing Eve, The Act, The Case Against Adnan Syed, Barry, Legends of Tomorrow, Hanna, Fleabag, The Twilight Zone, Doom Patrol, and The Tick.

My personal viewing experience went like this: I binged HBO’s true crime documentary mini-series The Case Against Adnan Syed over two days, peeking into the heart of America’s deeply broken criminal justice system. I was absolutely devastated by the final minutes where verifiable facts, hard evidence, and reasonable doubt go up against systemic injustice and ego-driven politics and ends up losing in crushing fashion.

Then I turned on Santa Clarita Diet: Season 3 and I smiled immediately at the sight of the characters. Soon enough, I was laughing and escaping into the wonderfully constructed sitcom storylines and character interactions. With how deeply screwed the entire world seems to be right now, we all need experiences like that, shows which simply make us happy, even if for a few fleeting hours. (That’s partially why old sitcoms like The Office and Friends continue to be the most-watched shows on Netflix.) For the past couple of years, no show has better fit that bill for me than Santa Clarita Diet, and it did so through sitcom perfection and lovably flawed characters.

Netflix just took that away.

In the press release announcing the cancellation, Olyphant joked, “I loved working on this show. I’m going to continue coming in and doing scenes. If they don’t want to film it, that’s up to them.”

What a Joel thing to say.

Santa Clarita Diet’s legacy will live on. For example, I recently caught an early screening of Olivia Wilde’s teen comedy Booksmart, and to my immense surprise and delight, Skyler Gisondo pops up and steals every scene just as he did on Santa Clarita Diet. I hope to see Liv Hewson do the same in something similar, and after the Deadwood movie is over and done with maybe Olyphant will land a sitcom of his own, proving again that he is more than just the taciturn tough guy he used to play. Barrymore should similarly have her choice of projects.

But, as a Netflix Original, Santa Clarita Diet isn’t going anywhere. All three seasons will still be there to stream for the foreseeable future. Luckily, The Hammonds do reach something resembling closure in the season 3 finale. It wasn’t actually supposed to be the end, but it works as one. May their zany, zom-com adventures continue off-screen for years to come.