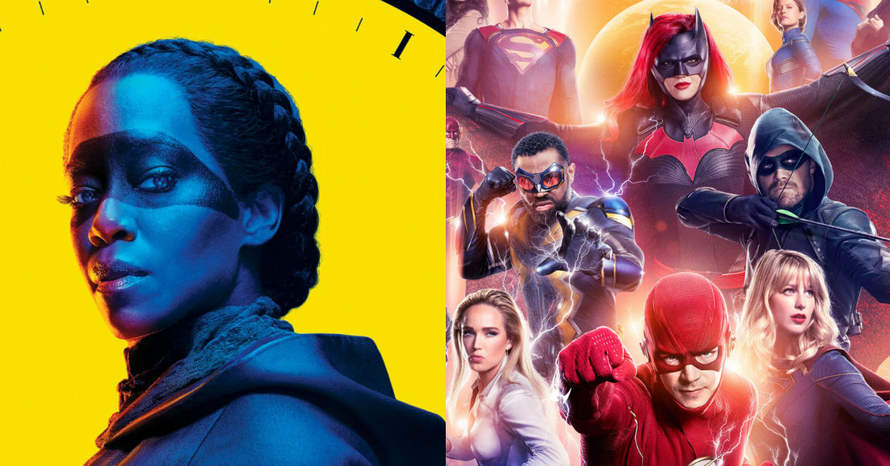 Let’s assess the current state of comic book TV, shall we, specifically the superhero shows:

There are certainly pockets of Peckinpah-level experimentation in there, as I previously argued about Watchmen, The Boys, and Doom Patrol. The larger theme here – as it across the entire entertainment industry – is consolidation. Going forward, comic book TV properties might not be quite so scattershot, Marvel spreading the goods all around the TV dial, DC setting up separate little chiefdoms for The CW, DC Universe, and prestige HBO. That’s such a cable/broadcast TV way of doing things. In the age of the streaming wars, you need to think more synergistically and put as much of your content behind your own paywall. Why let Netflix have its own Marvel universe when Disney+ can have its own? And why shouldn’t The CW and DC Universe shows nod to each other? WarnerMedia pretty much owns both of them.

If one of the rules of peak TV is that we can all self-select into our own cultural bubbles and still be remarkably well-fed with content then it’s on the studios to give us more of what we want, and what’s one thing certain comic book fans have wanted for years? For the live-action characters to interact and exist in the same universe together just like they do in the actual comics. We finally got that on the film side when Sony and Disney agreed to share Tom Holland’s Spider-Man, and when that uneasy marriage temporarily wavered the internet lost its shit. The two parties reconciled at least in part because their audience told them a return to the old way of doing things was unimaginable.

These characters – both on the film and TV sides of things – were never meant to be scattered to the wind.

(If you’re not up on Arrow, the blonde in the above scene is Mia, Oliver’s adult daughter from the future. It’s complicated.)

So, yeah, it’s pretty cool in Crisis when Matt Ryan’s version of John Constantine – who started out on a short-lived NBC series before hopping over to guest stints on Arrow before easing into a regular gig on Legends of Tomorrow – pops by Lux to ask Tom Ellis’ Lucifer – a character who started on a Fox show for years before being saved from cancellation by Netflix – for a favor. (I can make a chart if that’s all too confusing.) If you know the comics, you know Constantine and Lucifer should have always been sharing scenes like this; if you don’t, it still kind of makes sense, the Arrowverse’s most magically-inclined character shooting the shit with the literal devil, a carefree figure who actually works in a quick joke about the absurdity of Crisis’s storyline. (“Blah, blah, blah, the worlds are ending. It’s all very biblical, John.”)

But it feels like comic book TV is going through a really weird moment right now. Think back to what happened on two very different networks this past Sunday.

On Sunday, Supergirl kicked off The CW’s much-hyped Crisis on Infinite Earths, the biggest crossover event in comic book TV history. All of the primary characters from Supergirl, The Flash, Batwoman, Legends of Tomorrow, and, of course, Arrow gathered to battle a reality-wave unleashed by a mysterious entity known as the Anti-Monitor. (Before you ask, yes, there is also character simply called The Monitor, and yes, they are played by the same actor just with different make-up and costume.) The phrase “we have to save the multi-verse” was uttered frequently with pained sincerity and no trace of self-awareness. Entire universes blipped out of existence faster than Thanos can snap his fingers.

As Ariel might sing, there were cameos aplenty, Easter Eggs galore, and – you want alt-universe versions of Superman? They had at least twenty, most of them killed off-screen by Lex Luthor (Jon Cryer!) and his Book of Destiny, which they destroyed last year but turns out not really because, um, reasons.

On that same night, HBO’s Watchmen delivered its penultimate episode, a showcase piece for – spoiler – Doctor Manhattan, Alan Moore’s Superman substitute whose god-like powers render him emotionally distant (to say the least) and incapable of perceiving time the same way we do. Held back until the very end of the season, Manhattan aka John Osterman’s arrival opened the door for Watchmen to finally dive deep into pure comic book geekery. After all, in a show all about people dressing up and pretending to be heroes here, finally, is a genuine superhero with practically limitless power. Heck, he has blue skin and it glows, at least when he wants it to.

Watchmen, in true Damon Lindelof fashion, swerved around that and treated its audience to an hour-long character study and rumination on what it would be like to experience the past, present, and future at the same time.

In a nod to the structure of the iconic graphic novel/source material, a long conversation between Manhattan and series lead Angela Abar at a bar (note the pun int the episode title: “A god walks into Abar”) served as an effective framing device for multiple time jumps. Throughout the course of their very first conversation together, Manhattan already experiences the entirety of their relationship, knowing full well the ten happy years they’ll have together. John tells Angela he loves her even though they’ve just met, but that’s because in the future there will be a moment where she does something so selfless it causes him to instantly fall in love with her. Through the use of ingenious editing, we get to see those things happen at the same time.

At no point, however, did he ever warn her about the need to save the multi-verse. No, their biggest problem is a group of right-wing white supremacists. They’re trying to steal his power, setting up a season – possibly series – finale in which American Nazis might end up possessing the power of a god. Chilling.

It’s mere coincidence that these two wildly different poles of comic book TV collided on the same night. Crisis, a loose adaptation of the seminal 1985 comic book event, is something the CW has building toward for at least a year. It was formally announced at the end of last year’s annual crossover event, and Supergirl’s episode this past Sunday was simply the first night of a five-episode event. The next two episodes aired on the subsequent nights and incorporated even more crossover cameos, such as Black Lightning, Smallville, and, of course, Lucifer.

Watchmen, meanwhile, only exists because HBO called up Damon Lindelof, hot off The Leftovers, and offered him the chance to do anything he wanted with the graphic novel he grew up adoring. Just so happens, Lindelof was at that very moment contemplating producing a film or limited series about the Black Wall Street Massacre, a heinous moment in American history where the KKK openly slaughtered black men, women, and children in broad daylight as a form of retribution for daring to turn Tulsa, Oklahoma into a thriving center of black commerce. As a white man, Lindelof didn’t feel he had the right to tell that story as a straight historical drama, but incorporating it into a comic book context and turning Watchmen into an essay on race in America felt like a more justifiable way to trojan horse his message.

I like that we have both, even if Crisis isn’t completely my thing anymore. When it comes to the Arrowverse, I mostly bowed out years ago. Legends of Tomorrow is the only one I stuck with because it evolved into something more indebted to the best parts of Buffy and Doctor Who than Smallville. However, to prepare for Crisis I caught up on Arrow’s current season and The Flash’s most recent episodes. Even so, Crisis is just confounding, a lot of people in spandex standing around and expositioning at each other or sharing little asides where they hit the same dramatic note over and over again. That’s pretty much the Arrowverse formula, and the crossover events always push it up to 11. Crisis broke the dial, though. It is the most genuinely comic booky thing in the history of TV, and as such there are certain things you just roll with. For example:

The lead from Black Lightning gets maybe a minute to mourn the loss of his daughters and entire Earth before, hey, now shoot lighting at this thingamajig while two guys in bright red costumes calling themselves The Flash figure out what to do with something called the “cosmic treadmill.” It devoted a good chunk of its third episode toward Constantine, Diggle, and Mia’s quest to save Oliver’s soul (again, complicated) only to have their reunion cut short when a dude randomly walks out from behind a tree and in the vaguest terms possible offers Oliver the chance to become a super-powered entity known as The Spectre.

If you were at all confused, there were after shows hosted by an always-shouting Kevin Smith to offer some explanation. However, in those same after shows, Smith must have used the phrase “fan service” thirty times, and he’s right – that’s exactly what Crisis is, fan service, both for longtime Arrowverse fans but also hardcore DC devotees who don’t need any kind of explainer to understand a Spectre reference.

Watchmen isn’t exactly above such fan service. That bar I mentioned earlier, the one where Angela and Doctor Manhattan have their first conversation? It’s modeled after Eddie’s bar from the graphic novel, the place where The Comedian murdered a pregnant woman in front of a largely detached Doctor Manhattan. In fact, Lindelof is such a Watchmen superfan that every single episode is chock full of background treats ike that. However, the Easter egg is not the ultimate point of Watchmen; it is with Crisis.

Hey, it worked on me. Half the reason I watched Crisis was just the unprecedented nature of it all. I couldn’t care less about the Anit-Monitor or his benevolent counterpart, but Lucifer and Constantine hanging out? That was pretty dope. Hearing Erica Durance’s Lois Lane call Tom Welling’s Clark Kent “Smallville” after he just punched the Jon Cryer Lex Luthor? Sweet.

Crisis, however, feels like the past reorganizing itself into something even more consolidated and easier to follow. Watchmen feels more like the future, a genre re-examining itself. However, given the trends in the entire industry I don’t know how many more are truly going to follow in Watchmen’s footsteps. For example, does a barrier-pusher like Legion get made under a Kevin Feige-led version of Marvel TV? Only time will tell. Tick tock.

What’s your take on Crisis? Or Watchmen? Or are you still smarting over Cloak & Dagger being canceled? Let me know in the comments.