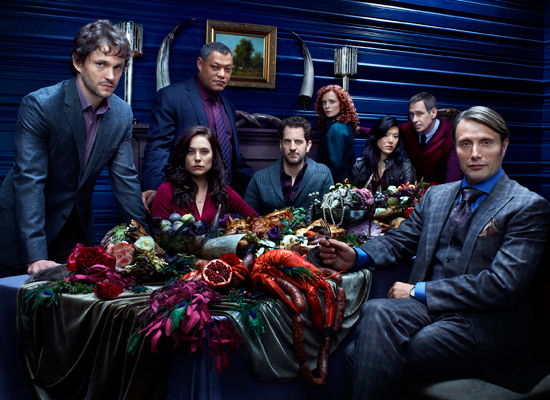 Two episodes into its run, NBC’s Hannibal is emerging as the television series about which I am most excited. Created by Bryan Fuller, Hannibal was billed as a prequel to the series of novels by Thomas Harris (and the string of films his novels inspired). However, the series prefers to take characters that have been previously established in other mediums as foundations and place them in unexplored plots. Unlike Fox’s hit series, The Following, Hannibal relies not on cheap shocks, incompetent police work, and a seemingly endless array of serial killer devotees (Seriously, I think most of the cast is aligned with the serial killer at this point), but on well-drawn, psychologically complex leads, well-crafted murder sprees, and a gorgeous palate of deep reds and somber, diminished color tones.

Series creator Bryan Fuller, best known for the series Dead Like Me and Pushing Daisies, is no stranger to series that present death as a major theme. However, those series, featuring grim reapers and a pie maker who could resurrect the dead through touch, respectively, portrayed death and the loss of life as a source of quirky comedy. Those worlds, especially that of Pushing Daisies, were bright, confectionery locales of vivid colors and screwball comedy, rapid fire line delivery.

In Hannibal, the world is mostly muted, cold, stark colors, with sporadic flashes of vivid red, and the tone is extremely somber. The series could easily blend in with the endless string of crime procedurals currently saturating the airwaves were it not for the compelling central characters at its core and the series’ gruesome, striking visuals. Fuller has created a series whose look is equal to Pushing Daisies’ in terms of visual splendor, but its polar opposite in terms of tone. Where Pushing Daisies looked like a fairy-tale land (complete with a fairy-tale narrator), Hannibal appears to take place in a nightmare landscape, complete with vicious, gruesome killings and sinister figures lurking behind every corner. They thrust the viewer into a dream-like (nightmare-like?) world in which everything seems insidious and amiss.

Both series feature visuals so rich and arresting the viewer can almost reach out and caress them.  They pull you in, whether or not it’s a world you wish to visit.

However, if that was all the series had to offer, it make for a hollow viewing experience. The series’ heart is the character dynamic between profiler Will Graham and the titular Hannibal Lecter. Will Graham already exists as a facet of the Hannibal Lecter mythology on film and in print, having been featured in the film Manhunter and that film’s remake Red Dragon (as well as the inspiring source material), but Hugh Dancy’s portrayal is more interesting than the character’s previous incarnations. Traditionally, Will Graham is presented as a somber action hero. He may not like his work, but he is more than capable of swooping in and enmeshing himself in the F.B.I.’s world when required. Here, Will Graham is far more reluctant to join any investigation. He’s borderline autistic, as he states outright in the show’s pilot, bothered by the ease with which he can place himself inside the most brutal of minds, and is more comfortable researching and lecturing from the sidelines.  The television landscape is stuffed to gills with dark, brooding crime solvers, but Dancy makes Will a likable, standout character, because he is someone who is so bothered by taking action.

He is a man adrift at sea, forced to venture further and further away from shore, both because he cannot turn off his unique ability, and the F.B.I. needs him to continue swimming in an inescapable current. After the first episode, in which he has been forced to kill a suspect, he spends the next episode haunted by his what he has done, seeing the man he shot in both his dreams and waking life. He worries about the consequences his deeds will have, as well as how he felt about having to take a life. Most procedurals present killing a suspect as an everyday occurrence, regardless of the fact that reality indicates this is more the exception than the rule. Hannibal ensures the viewer feels the weight of that action and the toll it has taken on our protagonist.

One of the series’ cleverest moves is making Hannibal, despite the series’ rather misleading title, a supporting player in the drama. The central role is that of Will Graham. Hannibal does not even appear until the pilot episode’s midpoint. Will is our protagonist, not Hannibal (as opposed to A&E’s hit Bates Motel, which places iconic characters Norman and Norma Bates at the series’ center), and the show is better off keeping Hannibal as an ambiguous, background entity.

The audience is just waiting for him to tip his hand (eat someone’s hand?), and any affection the series allows the viewer to feel towards Will yields an increase in tension.

In addition, Mads Mikkelsen, as the titular Hannibal the Cannibal, approaches the character in a way that is the complete opposite of Anthony Hopkins’s iconic performance. Hopkins portrayed Hannibal as an elegant, articulate boogeyman. It’s a brilliant performance, but it was a performance based in a world in which everyone around him already knew he was a murderer/ cannibal. It was acceptable for Hopkins’s performance to be more overtly creepy and malicious. Hopkins dominates both Silence of the Lambs (despite his minimal screen time) and Red Dragon. Mikkelsen presents a quieter, more subdued performance. He does not appear as a monster, because he is still wearing the mask of a normal, functioning member of society.

As in the previous novels and movies featuring Lector, he often seems like the lesser monster in a world full of “real” monsters. However, his distinctive European accent (Mikkelsen is himself Danish) and vaguely sinister appearance place him as an at-odds outsider, but the eeriness of his portrayal stems not from the way in which he is presented but from the audience’s perception of the character. Most, if not all, of the series’ viewers tuned into this saga secure in the knowledge of who Hannibal was and who he would become. We bring those preconceptions to the character, but Mikkelsen plays him as anomalous, not a fiend. His true nature is beneath the surface (and the audience does wince every time he serves a meal), but it is not yet visible. Here, he’s just a vaguely menacing psychiatrist.

Due to the Dancy’s and Mikkelsen’s masterful, central performances, Hannibal may best be described as a cat-and-mouse game in which one character is unaware such a game is afoot. After all,when Will Graham confesses to Hannibal his anxiety about his ability to connect with the serial killer mind, he does so unaware he is being drawn further and further into another serial killer’s web. Both characters function as societal outsiders, one because he sees the world in a way that plagues him, and one because he sees the world as walking-talking buffet.

Will often bemoans his inability to connect with others, but he is constantly surrounded by those who care about him. Lector, in contrast, is most often seen on his own. His only human contact, as far as the series is concerned, almost entirely revolves around Will. If the series is ultimately about Will finding his humanity (and perhaps the consequences of  those connections when he is, eventually, betrayed), it is just as much about Hannibal’s lack of humanity. There is hope Will can find himself a sense of belonging, but Hannibal is a man whose entire life is a façade. There exists only a hollow, empty vessel where a man should be. Yet the two characters working in tandem have the potential to be one of television’s most fascinating antagonists-partnerships. Both are working together, engaging in a battle of wills from which only one of them can walk away victorious. Considering the plots of both Manhunter (and Red Dragon) and Silence of the Lambs, we have a pretty good idea as to the paths these two character will eventually take, but the psychological toll of this relationship remains elusive. Couple this character dynamic with the series’ rich, distinctive visuals, and NBC may have the most compelling crime series on network television. Check out a promo for this week’s tomorrow:

The first two episodes of Hannibal are available through on-demand and various streaming services. The series airs on Thursdays at 10/9 Central.

So, what do you think? Have you watched Hannibal yet? Do you like it? Do you hate it? Let us know in the comments.