In honor of the release of the new Superman movie, we’ve decided to examine all eight of Christopher Nolan’s films, from Following to The Dark Knight Rises. Each day, We Minored in Film’s own Julianne Ramsey will discuss and examine one of Nolan’s movies, leading up to the June 14th release of Man of Steel.  Granted, Christopher Nolan only produced Man of Steel whereas Zack Snyder directed it (although Nolan was on set from time to time).  However, Nolan’s influence on the film is still where the movie’s publicity emphasis has been placed.  So, that’s where we went with it. 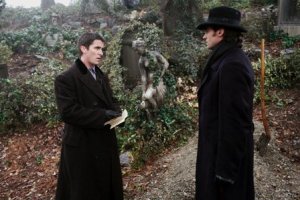 “Are you watching closely,” Michael Caine asks over an image of multiple top hats littering a woodsy ground. So begins the movie, The Prestige. Based on Christopher Priest’s science-fiction/ fantasy novel of the same name, Nolan’s film adaptation exists as the narrative equivalent of a Russian nesting doll. The film’s main focus is on dueling magicians, the charismatic showman, Robert Angier (Hugh Jackman), and the more skilled, less charismatic Robert Borden (Christian Bale), but becomes as much about narrative trickery as it does magical illusion. The two begin as friends, but are driven apart by an onstage tragedy.

The remaining film revolves around the the continually escalating acts of vengeance one magician perpetrates against the other, until Borden develops a trick so impressive Angier is forced to take notice.

Borden’s trick, called the Transported Man, involves him stepping into a box and stepping out of another box.

Check out the trick below:

Robert Angier copies the trick, using a double, and finds more success with his version than Borden does with his. However, Angier is forced to always be the man in the box (rather than the man who comes out of the box), taking his bows beneath the stage. He seeks the crowd’s adulation, but his trick denies him that satisfaction. Eventually, the film’s oft repeated line, “no one cares about the man in the box,” takes on a chilling, horrifying significance, so take note of it. Angier believes there is more to Borden’s trick than using a mere double, and his obsession with finding out his secrets and besting him becomes an obsession. Eventually, secrets are revealed that show the viewer how far down the rabbit hole vengeance and deceptions have led our two protagonists and how much of themselves they have lost in their quests.

First things first, The Prestige is a brilliant, often overlooked, entry in Nolan’s filmography. Perhaps, because it’s a film that takes several viewings to fully appreciate everything going on within the narrative’s confines. On one level, of course, you have the duel occurring between two magicians, driven by revenge. Later, the film involves real-life scientist, Nikola Tesla (played by David Bowie, of all people) and his feud with (useen) rival scientist, Thomas Edison.

This secondary feud emphasizes and enhances the feud between the magicians, while presenting both the distinction between science and illusion, and the blurring of the line between the two as the film progresses.

Check out the introduction scene between Bowie and Jackman below:

The other aspect of the film often missed on first viewing involves the tragedies sprinkled throughout the narrative. The plot really begins when a tragedy drives a wedge between our two lead characters, but there are others along the way. Borden, the elusive, enigmatic magician seems to rob happiness from his wife, his mistress, and himself, because his entire existence seems to be an illusion. However, Borden’s greatest casualty may be Robert Angier. In one of his best roles, Hugh Jackman infuses Angier with characteristics both sympathetic and revolting. He begins as a man who merely seeks retribution for the loss he experiences. However, his vengeance quest against Borden ends up costing him his soul, as his desire becomes less about revenge and more of an obsession with merely proving his superiority through petty, eventually costly actions.

In addition, Bale infuses Borden with his steely, compelling, intensity, while maintaining the character’s enigmatic quality. At times, he seems charming and likable, while at other points he seems dangerous and frightening.

As an audience member, our sympathies remain with Angier for the bulk of the film, because he is knowable and Borden remains elusive. It’s only near the film’s climax that we realize how much Angier has altered and the monster left in his place.

It’s a brilliant, tragic film, and filled with as much slight-of-hand as Angier’s magic show, and while it may seem emotionally distant at first, additional viewings reveal the emotional devastation at its center.

The Prestige is available to rent through various streaming sights and purchase on DVD or Blu-ray.

Next up on The Great Christopher Nolan Film Re-Watch is The Dark Knight, in which Heath Ledger shows the world a cool new magic trick and Christopher Nolan officially becomes wealthy enough to never really have to work ever again (thankfully, he decides to keep directing films, though).