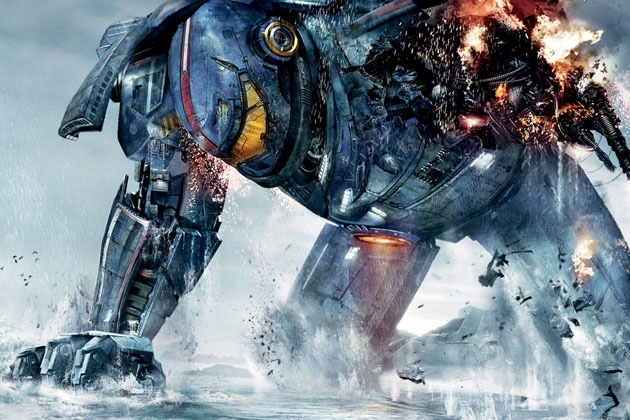 It may officially be called Pacific Rim, but the latest from director Guillermo del Toro – due to be released in the US, UK and most everywhere else this Friday (7/12) – might as well have simply gone with the title Monsters vs. Robots.  Or at least that’s what most of the critics are saying so far.  Where they differ is whether or not del Toro and screenwriter Travis Beacham managed to infuse this derivative, three world premise with enough ingenuity to rise above its Transformers-like dumbness, or if the spectacle on hand is merely a whole lot of sound and fury representing a film whose budget was allowed to grow out of control.

Pacific Rim, of course, is the incredibly risky $190 million budget action film from Warner Bros. and Legendary Pictures.  It’s premise is basically Godzilla vs. Transformers, as Godzilla-like creatures (called kaiju) emerge from the ocean one day and lay waste to coastal cities.  In response, humans build humongous robots, each of which are piloted by two people, to serve as Earth’s primary line of defense.  The plot and art direction are inspired by a wide variety of sources, but it is itself an original property not directly based on a prior film, TV show, or board game (because of Battleship, we must now always add that last one).  As such, it has not been uncommon to view its trailers before other films and notice other members of the audience with obvious “What the hell was that?  A Transformers sequel?” looks on their faces.

So far, the majority of critics have viewed the film favorably, with a 77% Fresh Rating on Rotten Tomatoes based on 65 reviews (at the time of this writing).  As a point of comparison, that is a far better score than any of the films from the franchise to which Pacific Rim will most often be compared, Transformers.  Of course, each one of those has made a ton of money even though critics hated them.  So, obviously critical opinion typically has little causal relationship upon box office performance.

However, there are some critics whose adoration for Pacific Rim is so euphoric it’s almost – not quite, but almost – unseemly.  Others just can’t quite get as on board with it.

3 Critics Who Liked the Film –

“During my second viewing of the movie I sat behind a boy who looked to be about eight or nine, and he was involuntarily fist pumping during the entire [kaiju attack on Hong Kong] scene.

That kid is the avowed target audience of Pacific Rim […] This is a movie designed frame by frame to make kids explode with excitement and imagination, and it’s a movie that will reactivate that purity in even old fogies. Pacific Rim makes you feel like a kid, not because it’s stupid (it isn’t) or because it’s silly (it can be, but in the right way) but because it will fill you with the sort of awe and joy you had when you first saw Ray Harryhausen’s skeletons fight or Godzilla first trample Tokyo or the Millenium Falcon show up out of nowhere at the Death Star. While humanity is in dire straits in Pacific Rim this isn’t some sort of Nolan-esque meditation on the futility of heroism or the failings of men – it’s a movie about triumph and hope and overcoming all odds.” Read the full review here.  Devin is among the many, many Pacific Rim reviewers to reference Ray Harryhausen favorably in their review.

Todd McCarthy at The Hollywood Reporter:

“In most ways, this paradoxically derivative yet imaginative sci-fi epic is everything every monster movie since the beginning of time might have wished it could be: In no way pinched budget-wise, it’s got first-class special effects, crafty behemoths that calculate and react to circumstances in non-dumb ways, a smart director who injects a sense of fun and surprise whenever he can, a fair percentage of characters you don’t mind watching, and a few decent plot twists.” Read the full review here.

“Let’s start from a different angle: Pacific Rim feels like a movie that began with the question, “How can we make something like Transformers, only without the migraines and the insultingly stupid screenplay?” And someone (perhaps Guillermo del Toro, perhaps screenwriter Travis Beacham) figured it out: put some human beings inside your giant “robot” and you’re halfway to making an apocalyptic action-fest that has a little meat on its bones. So while it’s true that practically all of the characters in Pacific Rim are broad caricatures or one-note archetypes, it’s important to remember that we’re dealing with a tongue-in-cheek genre stew that has characters with names like Herc Hansen, Miko Mori, and Hannibal Choi. The Pacific Rim heroes are as deep as they’d be in issue #1 of a new comic book, and frankly it’s a little refreshing to have some basic heroes after dealing with so many emotional superheroes with daddy issues.” Read the full review here.

3 Critics Who Weren’t Quite as Crazy About the Film –

“But like many sci-fi visions liberated by CG, the geography of destruction is hard to follow. You get a barrage of sensation, scaled against crumbling cityscapes, but are left guessing how one battle is won and another lost. Within their cockpit heads, the two heroes enact hooks and jabs like deranged puppeteers. These humans rarely rise above the risible. As thinly drawn as their teatime-TV ancestors, they are heroes as mechanical as the robots, pre-programmed with personal issues (chiefly dead relatives), too easily overcome.” Read the full review here. Nathan gave the film 3/5 stars, meaning his is by no means an entirely negative review.

“Inspired by the strain of Japanese monster movies where guys in foam reptile suits or cardboard-and-tin robot outfits would grapple over a tiny cardboard cityscape, ‘Pacific Rim’ replaces the guys in suits with millions of dollars of computer effects. While the end result looks much better, I’m sorry to report it’s just as silly; worse, Del Toro and screenwriter Travis Beacham seem dead set on not giving us even the smallest fingerhold for our suspension of disbelief […] ‘Pacific Rim’ is goofy and unique and brash, but I can see it enduring as a cautionary tale about blockbuster spending far more easily than I can see it enduring as a classic piece of entertainment.” Read the full review here.

“Pacific Rim (an oddly muted title for this choleric rave-up) is itself a spare-parts movie — a massive collision of popular action films, or maybe a Storage Wars with the emphasis on war. The picture certainly means to fill the summertime void in an odd-numbered year left by the absence of a Transformers episode; it has the same world-in-peril scenario, similar rock-’em-sock-’em robots.” Read the full review here.

The Gist: It is a big-budget ode to B movies with thinly drawn characters and infectious action sequences that will possibly have you reverting to a childlike state of involuntarily fist-pumping at the big, loud things, or instead checking your watch and lamenting a sense of having felt let down by del Toro and company.

Still can’t make up your mind?  Check out the final theatrical trailer for the film: