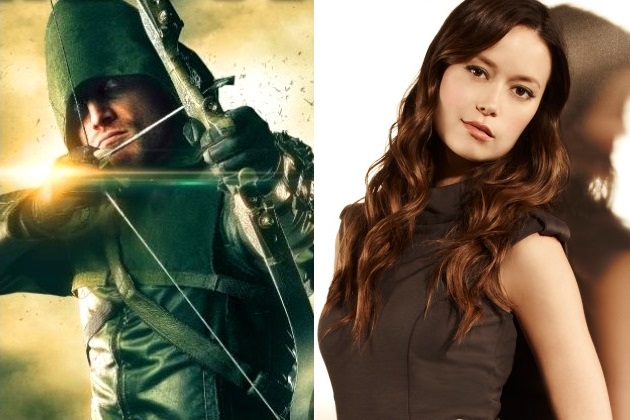 There is yet another woman in Oliver Queen’s life, or at least in the life of the CW’s version of Oliver Queen on Arrow.  By the end of the first season of the show, Oliver had a publicly disgraced mother, a sister with “wicked aim” and potential crime-fighting tendencies, a kind-of girlfriend suddenly burdened with immense guilt after the death of a mutual friend, a kick-ass IT gal with a knack for one-liners, and a potential girlfriend or enemy in flashbacks.  That’s not even counting a one-time girlfriend who didn’t take the break-up well and a white-haired ninja assassin consistently operating on the periphery of the action.   Now, he’ll have to take on a freakin’ Terminator.

According to Deadline.com, Terminator: The Sarah Connor Chronicles star Summer Glau has joined the cast of Arrow in a recurring role in the upcoming season.  Who will she play?  And what can we expect from the character?

Do you really want to know?  Yes?  Keep on reading.  No?  Well, just stop now and take delight in the knowledge that beloved Joss Whedon starlet Summer Glau will help make an already-great show probably kind of awesome next season.

Glau has been cast to play Isabel Rochev, Vice President of Acquisitions of Stellmoor International, a company which will attempt to take over Queen Consolidated.  The comic book version of Rochev does eventually succeed in taking over Queen Industries (its name in the comics), entering in as the new CEO at a time when Star City (the show changed the name to Starling City) has been devastated and left half in ruin.  Rochev simply strives to return Queen Industries to glory out of her devotion to Robert Queen, whom she loved.  Oh, yeah, she also constantly tries to kill Oliver because she considers herself the rightful heir to the Queen fortune and deems Oliver unworthy.  Plus, she sometimes wears a mask, jewelry originally given by Robert to his wife Moira, and speaks with a Russian accent.  She is a comic book character, after all.

Knowing all of that, introducing her into the series at this point makes complete sense, as the events of the season finale destroyed a sizable portion of the poor section of Starling City. Plus, Oliver’s mother took to live television to admit her part in the evil scheme to destroy the city, an admission which resulted in her being taken away to prison instantly.  So, that probably didn’t do a whole lot of good for Queen Consolidated.  Also, Arrow clearly takes most of its cues from Christopher Nolan’s Batman Begins, and as you’ll recall one of the plots in that film involved Bruce Wayne’s efforts to retain control of Wayne Industries.  Nolan re-visited that plot line in last year’s The Dark Knight Rises.  So, of course Arrow had to get around to doing the same thing.

Rochev was previously referenced in the show as one of the many names in the hit-list journal Oliver’s father left to him.  There’s no way of knowing at this point how faithful the show’s version of Rochev will be to the comics.  For example, they cast the spectacularly brunette Summer Glau to play her even though the character is traditionally a blonde in the comics.  One would anticipate plenty of board room scenes in Glau’s future, but it’s almost impossible to picture her being on the show and NOT ending up in some awesome fight scenes.  Come one – she was River in Firefly/Serenity and the freakin’ Terminator in Sarah Connor Chronicles!  Most recently, Glau was a recurring character on the dearly departed Alphas where she, granted, didn’t really have any fight scenes.  But, still, look with the punching and the kicking and grunting in Serenity:

Arrow executive producer Marc Guggenheim previously admitted that season two of the show would see a slight change to seasons one’s formula wherein John Barrowman’s Malcolm Merlyn served as the primary “Big Bad.”  Of course, that is a term derived from the Joss Whedon model of serialized television in which a single figure serves as the primary antagonist per season, with the potential for plenty of mini-bad villains to encounter along the way.  For the second season, Guggenheim says they will double the fun and have two DC-comic-based “big bads.”  Glau’s Isabel Rochev is almost definitely one of them.  Who could be the second?

The villains already introduced by the show include Count Vertigo, Constantine Dragon, China White, and Deadshot.  Plus, Oliver’s friends from the island flashbacks don’t always stay friendly in the comics, with Slade Wilson becoming the villain Deathstroke and Shado turning into a more of a frenemy.  My guess is that it will either be Deathstroke or an entirely new character to the show whose name will trigger instant recognition for fans of the comic books.

Lastly, kudos to Arrow‘s casting department for consistently adding geek-bait names to this show, with Joss Whedon alum Summer Glau following in the footsteps of Doctor Who stars John Barrowman and Alex Kingston for recurring roles.  Plus, the regular cast has always consisted of the hilariously named Paul Blackthorne, beloved by some for his starring role in the little-seen show Dresden Files, and Katie Cassidy, previously best known as the original Ruby on Supernatural.  In fact, if I’m honest the presence of Barrowman and Blackthorne was hugely influential upon my decision to start watching the show in the first place.  With Glau on board, I certainly don’t expect to be turning away anytime soon.

What do you think?  Who do you think could be the other big villain?  Are you excited to see Glau join the cast, or have you not been entirely fond of her work outside of Joss Whedon shows?  Let us know in the comments.