Ben Affleck’s path to career renaissance has largely been to turn himself into George Clooney, Jr. – a respected writer-director who also happens to act in his own films.  Heck, he’s even mentored under Clooney who produced Argo which Affleck wrote, starred in, and directed to a Best Picture win at the Oscars earlier this year.  Well, now Affleck is mimicking Clooney in a new and even stranger way: He’s going to play Batman.

No, seriously, this is actually happening.

Ben Affleck is playing Batman in the Man of Steel sequel fans are either calling Batman Vs. Superman or Superman Vs. Batman, and has a new release date of July 17, 2015.  The news is official, announced by Warner Bros and reported in various industry trades (in this case, The Hollywood Reporter).

It had been previously speculated that Warner Bros. was offering Christian Bale so much money to return as Batman he could practically swim in it, Scrooge McDuck-style.  However, they’ve gone with an entirely new Batman instead, not even going with Joseph Gordon-Levitt’s de facto new Batman from Dark Knight Rises.  This decision to begin anew falls more in line with what screenwriter David S. Goyer (Man of Steel, the upcoming sequel) told Empire Magazine about his intention for Man of Steel to establish a new D.C. film continuity not connected to the Christopher Nolan Dark Knight trilogy.  However, it does also mean that by the time this film comes out they will have re-booted the character of Batman on screen in only 3 years, waiting even less time than Sony did to re-boot Spider-Man. 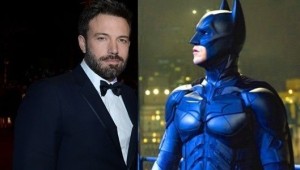 Here are the quotes from the key people about the casting:

“We knew we needed an extraordinary actor to take on one of DC Comics’ most enduringly popular superheroes, and Ben Affleck certainly fits that bill, and then some. His outstanding career is a testament to his talent, and we know he and Zack will bring new dimension to the duality of this character.

Zack Snyder, Director of Man of Steel and its Forthcoming Sequel-

“Ben provides an interesting counterbalance to Henry’s Superman. He has the acting chops to create a layered portrayal of a man who is older and wiser than Clark Kent and bears the scars of a seasoned crime fighter, but retain the charm that the world sees in billionaire Bruce Wayne. I can’t wait to work with him.”

“We are so thrilled that Ben is continuing Warner Bros.’ remarkable legacy with the character of Batman.  He is a tremendously gifted actor who will make this role his own in this already much-anticipated pairing of these two beloved heroes.”

Those are all very nice things to say, but this is a bizarre turn of events.  Affleck has been building up his credibility over the past couple of years primarily as a director, with seemingly all of Hollywood rallying behind him earlier this year when the Oscars  mysteriously snubbed him for a Best Director nomination for Argo.  Yes, he also starred in two (Argo, The Town) of the three films (not Gone Baby Gone) he directed, but as Affleck himself joked during Oscar season the support for his directing was nice but there didn’t seem to be any outcry about him missing out on a Best Actor nomination for his performance in Argo.

Part of the reason for this is that Affleck became such a reviled, over-exposed actor during his relationship with Jennifer Lopez (and he just made so many terrible films, most notably Gigli but also Reindeer Games, Paycheck, Surviving Christmas) that there is still a barrier to watching him act.  In the back of your mind you’re still thinking, “That’s Ben Affleck on the screen,” as opposed to completely engaging with his character.  So, when we hear that he is going to play Batman it’s hard to imagine it turning out any other way than looking, well, weird.

Henry Cavill was easy to picture as Superman prior to Man of Steel because he was mostly an unknown who physically fit the profile.  Ben Affleck does fit the profile of Batman – he’s got the square jawline, good physique (as displayed in Argo), and is the slightly older (he just turned 41) type they wanted to fit with their Frank Miller Dark Knight Returns-inspired approach to the story.  However, imagining Ben Affleck as Batman mostly feels like looking up at the screen and realizing, “That’s Ben Affleck…playing Bruce Wayne.  Why?”  He is such a celebrity whose presence brings with it so much baggage it’s hard to see past it, a position many took about Robert Downey, Jr. as Tony Stark/Iron Man until the second they saw Iron Man.

Affleck has done the superhero thing before, and I don’t mean when he played TV’s Superman George Reeves in the historical drama Hollywoodland.  Back in 2003, he donned the glasses, cane, and tight-fitting red leather as lawyer-by-day Matt Murdock/kick-ass bringer of vigilante justice by-night Daredevil.   As an actor, Affleck is the type that you can actively see acting as opposed to watching him morph into a different role, and you can definitely see him trying to be bad-ass in Daredevil instead of simply being it.  Audiences rejected the film, which ended up with $102 million domestic gross on a $78 million budget.  That would be like grossing $138 million at current ticket prices, around on par with this summer’s The Wolverine.

But, still, Batman?  Yeah, actors can be superheroes more than once (Chris Evans going from The Fantastic Four to Captain America, Ryan Reynolds from X-Men to Green Lantern), but they hadn’t become respected directors in the interim.

Here’s something to remember, even cling to if this Affleck as Batman news is too strange to process – fans outright revolted when Michael Keaton was cast as Batman back in 1989.  He just didn’t seem right for the role at all, mostly known at the time as a comedic actor.  Look at how well that played out for all involved.  The same goes for Heath Ledger as the Joker, who managed to make Jack Nicholson’s beloved take on the character look positively cartoonish (which it always was – we just didn’t quite realize that).  Plus, Robert Downey, Jr. seemed too high-profile a choice as Iron Man, and we were ever so wrong about that one.

As casting news such as this tends to do, this does distract from the larger concern: it’s not that Ben Affleck will play Batman but that Affleck will play Batman in a Zack Snyder film.  We weren’t too crazy about Man of Steel, and the fact that Christopher Nolan will be involved in name only in this Batman/Superman team-up sequel does not bode well.  Though no one knows anything for sure, it’s been widely speculated that this new film would likely follow a similar plot to the abandoned Superman-Batman team-up film from a decade ago.  If they do, that means they have one huge problem to solve: how do you have Superman and Batman fight on screen and make it look believable that Superman wouldn’t vaporize ole bats in 2 seconds (unless you introduce kryptonite into the scenario)?

What do you think?  Has this news blown your mind?  Don’t care?  Love Affleck and will fight anyone who says otherwise?  Let us know in the comments.

Julianne Ramsey contributed to this report in pointing out the concerns at the time over the casting of Health Ledger, and re-inforcing our shared distaste for Man of Steel.

Be Sure to Check Out Our Previous Superman Vs. Batman Coverage: