This past September, Fox won a bidding war with the other networks over Gotham, an origin story about Commissioner James Gordon from the Batman comics.  Set up at Warner Bros. Television with Bruno Heller (The Mentalist/Rome) on board as creator/executive producer, Gotham seemed like it would be a police crime procedural that just happens to be set in a pre-Batman Gotham City and revolves around a not-yet-Commissioner James Gordon.  In this telling of the story, Gordon would still just be a detective, much as he was in Frank Miller’s iconic graphic novel Batman: Year One (which partially inspired Christopher Nolan’s Batman Begins).  It’s likely that as in both of those sources Gotham would see Gordon battling corruption from within the police force.  Some of Batman’s villains are on the table to possibly show-up, but Batman is off-limits.  The concept is somewhat adapted from the short-lived comic book series Gotham Central, although that series’ focus was on the police force with only occasional cameos from Commissioner Gordon and Batman.  WB-TV tried to adapt it into a TV show as far back as a decade ago. 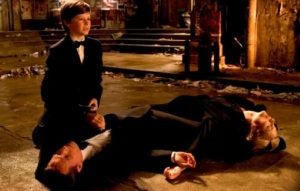 In December, it was reported the script for the pilot was complete, and featured Detective Gordon investigating the double homicide of Thomas and Martha Wayne.  A 12-year-old Bruce Wayne was also in the script.

At the Television Critics Association Winter Press Tour, Fox Chairman Kevin Reilly offered an update, “The show will track Bruce from a child (around 12-years-old) until he puts on a cape in the finale. We will see how they get to become what they are as Gotham is teetering on the edge”. Reilly also described the in-development show as “an operatic soap with a larger-than-life quality.”

In addition to covering the origin story of Bruce Wayne, the show will apparently delve into the origins of some of Gotham City’s most famous villains, specifically Catwoman, The Riddler, and The Penguin.  Other villains could show up; those are just the only three confirmed at the moment.

Danny Cannon will direct the pilot from Bruno Heller’s script.

So, and say it with me now, will this just be Smallville but with Bruce Wayne instead of Clark Kent?  Reilly’s “until he puts on the cape in the finale” is very reminiscent of Smallville’s increasingly hilarious rule that Clark Kent could not become actual Superman until the series finale.  If so, it will be the circle of derivative TV shows.  Smallville actually began its life as a pitch for a Bruce Wayne origin story which would follow his travels throughout the world gaining the training and skills he would late put to use as Batman.  It overlapped too much with a new Batman film in development at the time, but WB-TV liked the idea enough to ask a different writing pair (Miles Millar and Al Gough) to drop their hopes of a Lois Lane TV show and instead do the “young Bruce Wayne” thing just with Superman instead.

Maybe WB-TV and Fox looked at the on-going failure of Agents of SHIELD, and realized they can’t just create a comic book show set within an existing universe, hold back the actual superheroes (and/or villains), and expect audiences to tune in.  Heck, not even comic book fans supported Gotham Central enough to keep it going longer than a couple of years.

It’s still kind of confusing as to whether or not Gotham will center around Bruce Wayne or Detective Gordon, although with Wayne being 12-years-old you’d have to think the plan is for the initial focus to be on Gordon.  DC has very tightly guarded all of its Batman characters, routinely letting them out to play in live action film and in various Batman-centric animated kids shows.  However, a couple of minor Batman villains (e.g., Dollmaker, Solomon Grundy) have popped up in the current season of Arrow, and now they’re apparently letting Gotham have fun with the Riddler, Penguin, and Catwoman.  It’s an interesting development, although a skeptic might wonder if finally opening the door to Batman’s legendary rogue’s gallery is wasted on the likes of Heller.  Yes, he did Rome, but he’s most known for the rigidly formulaic, very-CBS Mentalist, aka, Psych but played straight.  Will Gotham ultimately just be a formulaic cop show that happens to star a couple of comic book characters we might recognize?  Is that a bad thing?  If you’re into that type of show then not really.

However, while Fox appears high on Gotham remember that this all still means nothing.  WB-TV filmed pilots for both Aquaman and Wonder Woman over the past decade.  Why have you never heard of those shows?  Because they never made it past the pilot stage.

What do you think?  Am I being too hard on Heller?  Does this sound like it could be great?  Or is it a giant misuse of Batman and Batman-related characters?  Let us know in the comments.