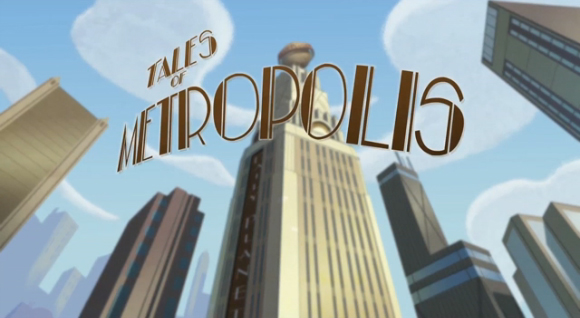 There is a bit of an arms race going on between DC and Marvel on the live-action TV front right now, which you can read about elsewhere on this site (DC’s 5 shows in-development, Marvel’s Netflix deal).  What about animation, though?  Marvel is a relative newcomer to live-action TV with Agents of SHIELD, but they’ve been a longtime player in the animation game going back to at least Spider-Man in 1967.  Even so, historically DC has kind of kicked their ass in terms of quality, thanks in large part to Bruce Timm’s DC Animated Universe (Batman: The Animated Series, Superman: The Animated Series, Batman Beyond, Static Shock, Justice League, Justice League Unlimited) from 1992-2006.  Plus, though existing in a different continuity than Timm’s shows and featuring a distinctive, Anime-influenced visual style Teen Titans (2003-2006) was also capable of greatness.  In that same time span, Marvel was content with making fondly remembered kids cartoons (X-Men: The Animated Series, Spider-Man) that have not aged well (and that comes from someone who grew up on those two shows), and awkwardly experimenting with CGI animation (Iron Man: Armored Adventures) on a TV budget.

As of late, Marvel kind of caught up with DC.  A short-lived show like Super Hero Squad (2009-2011) was a perfect entry point for very young audiences while the more mature Wolverine and the X-Men (2009) and The Avengers: Earth’s Mightiest Heroes (2010-2012) featured significantly improved writing, animation, and voice acting on the way toward appealing to younger and older audiences alike.

Ever since 2012, Marvel has effectively utilized Ultimate Spider-Man to not only introduce fans to the universe of Spider-Man but also the wider roster of Marvel heroes and villains, with regular co-starring appearances from the likes of Captain America, Thor, Iron Man, Nick Fury, Loki, and even Agent Coulson.  Those who initially rejected Ultimate Spider-Man due to its Family Guy-esque propensity for cut-away gags and at-times annoying version of Spider-Man have since come to embrace what has been a steadily improving show.  The same might happen as well for Marvel’s other two current shows, Avengers Assemble and Hulk and Agents of S.M.A.S.H., which have initially been hampered by lackluster animation and a shoehorned need to better conform with the film universe.  However, this synergistic strategy will continue in 2015 when rumor has it Marvel will premiere a Guardians of the Galaxy animated series.  Speaking of corporate synergy, since being purchased by Disney Marvel’s shows now air on DisneyXD, and Ultimate Spider-Man, Earth’s Mightiest Heroes, and Wolverine (among others) are available to stream through Netflix.

DC also leverages its corporate parent, Warner Bros., to air a block of programming (DC Nation, 2012-present) every Saturday morning on Cartoon Network (which, like WB, is owned by Time Warner).  It started off with two half-hour shows (Green Lantern: The Animated Series and Young Justice) inter-cut with a variety of 1-2 minute cartoons called DC Nation Shorts.  Both Lantern and Justice eventually won over the hardcore DC faithful, but they were also mercilessly screwed over by Cartoon Network, who across each show’s 2-season runs yanked them from the schedule for months at a time with no warning nor explanation.  Many would scream as loud as they could that Young Justice had become one of DC’s best ever animated shows, but if it was never on the air what did it matter?  Plus, its related comic book tie-in didn’t sell well, and ratings don’t really matter for these types of shows but instead toy sales.  Cartoon Network canceled both shows without explanation or an official declaration of cancellation, merely announcing DC Nation would be occupied in 2013 by the first ever CGI batman show (Beware the Batman) and a reboot of Teen Titans called Teen Titans Go!

As it came time for Beware the Batman to premiere this past July, in various interviews its creators begged spurned Green Lantern and Young Justice fans to tune in because from their viewpoint they thought the animated super hero show was dying.  So, kind of a “don’t blame us but instead support us” thing.  What happened?  Cartoon Network pulled Beware the Batman before the end of its first season, promising it would return in January of 2014.  Well, it’s January now, and Beware the Batman is nowhere on their schedule, although unlike Lantern and Justice fans don’t appear too put out by having Batman taken away from them.  Teen Titans Go!, meanwhile, is still alive and kicking, currently finishing out its first season of 52 11-minute shorts which comprise 26 half-hour episodes.  A second season of equal length has already been ordered.

Arguably, DC Animation is more focused on cranking out their direct-to-video films which up to now have predominantly been devoted to adapting beloved graphic novels, like Grant Morrison’s All-Star Superman and Frank Miller’s Batman: Year One.  As of late, DC Animation has given these films over to director Jay Oliva, whose prior work as a Young Justice director has clearly influenced the rather similar animation in The Dark Knight Returns, Part 1 and 2, Justice League: Flashpoint Paradox, and Justice League: War.  DC has two confirmed future films (Son of Batman, Batman: Assault on Arkham), and will now attempt to make 3 films a year, 2 of them existing in the same continuity and the other an oddball graphic novel adaptation.  The problem is these DC films, albeit superior to Marvel’s animated films (Thor: Tales of Asgard), mostly preach to the converted.  They are missing out on opportunities to convert new young fans via TV shows.

Teen Titans Go! is the only show they have going right now (at least until Beware the Batman comes back), but many adult DC fans despise it.  It began its life as a series of DC Nation shorts, presenting the same characters/same voice actors (Robin, Starfire, Cyborg, Beast Boy) from Teen Titans but with brighter animation and slap-sticky, juvenile humor.  As a full series, they’ve made it a sanitized version of an Adult Swim show, right down to the 11-minute running time, complete lack of continuity (e.g., some episodes end with the characters dead), and a joke-per-every-5 second mentality, ala Harvey Birdman.  It is ostensibly aimed at a younger, male audience, and if my 5-year-old nephew’s deep love for the show is any indication I’d say mission accomplished.

If Teen Titans Go! can begin as a DC Nation Short why can’t they try it again with some of their other DC Nation Shorts?  Many have raved about Robert Valley’s series of Shorts centered around a 1970s-inspired version of a modern-day Wonder Woman:

While that is a gorgeous cartoon (part 1 of 3), I highly doubt it would translate to a full TV series like Teen Titans Go!.  For one thing, how do you even make toys out of that?  They could try a different Wonder Woman animated series, but they keep saying her DC Animated Films sold poorly so they are reluctant to again grant her a starring vehicle (and also because kids shows crave toy sales from little boys, couldn’t care less about little girls).

If Wonder Woman isn’t an option, why not Superman?  They are using Man of Steel to springboard their live-action cinematic universe, but ever since Superman: The Animated Series ended in 2000 they’ve only ever had Superman as part of an ensemble (Justice League/Justice League Unlimited, Young Justice) in their animated shows.  However, those were mostly serious takes on the character.  If their new strategy is to use their animated films to appeal to the converted and entertain the kiddies with goofy, quick-hitting, light-hearted TV shows why not try and make a funny Superman show?  They kind of already did that with a series of DC Nation Shorts called Tales of Metropolis:

This one with Jimmy Olsen manages to make Superman pretty hilarious –

This one does the same with Lois Lane, featuring Kevin Conroy as THE voice of Batman –

This one also finds some humor with Bizarro –

The question is whether or not these shorts could actually survive being stretched out to a Teen Titans Go!-like 11 minute running time.  Quite a few of the Titans Go! episodes have struggled with that.  You can make fun of Lois as an overly tenacious reporter in 1 minute, but could it be as effective over 11 minutes?  Beyond that, their film universe currently takes itself pretty darn seriously (overly so, according to naysayers).  Would a Tales of Metropolis TV show be too jarring a tonal difference, converting younger audiences with juvenile humor only to have them not at all recognize their version of Superman in something like Man of Steel?

For all of these reasons and more, Tales of Metropolis will probably never actually become anything more than it is right now.  However, Superman is a very challenging character to adapt, and these three cartoons are the most fun I’ve had with the character in a long time.  Well, that is until I saw these drawings from freelance artist Brittney Williams from a planned fanart and fan comic series to be entitled: The Daily Planet Files (via io9.com): 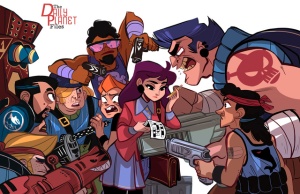 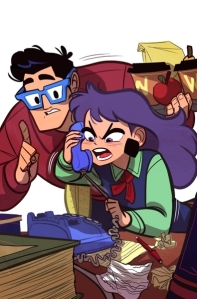 Basically, I want to love Superman, and Tales of Metropolis and/or Brittney Williams’ Daily Planet Files sketches indicate that could happen.  A light-hearted approach to the character can actually be something better than Super Friends.  So, will Cartoon Network make it happen, or will DC hire Brittney Williams?  Of course not.  For synergy reasons, I would guess a proper Justice League show would be their most likely next step.  However, as someone who consumes super heroes mostly through animated TV shows as opposed to comic books I am a bit worried that DC is starting to yield the field to Marvel.

What do you think?  Could a Tales of Metropolis show work?  Do you hate, hate, hate Teen Titans Go!?  Is Brittney Williams’ version of Lois Lane the absolute best you’ve ever seen (there is no wiggle room here)?  Let us know in the comments section.