The person coming back to Arrow is Jessica de Gouw as Helena Bertinelli, and the March 26th episode’s title (“Birds of Prey”) is a reference to a comic book with any larger meaning left for us to debate.

It’s interesting to look back at seasons of TV shows and pinpoint exactly when it was things either turned around, for the better or worse.  For example, Angel was a show still in search of its identity until Faith (Eliza Dushku) arrived for a two-parter during the first season that allowed them to more clearly differentiate their show from that which they were spun off of, Buffy the Vampire Slayer.  That was a turn for the better.  Buffy, on the other hand, took a clear turn for the worse during its fourth season in its 7th episode “The Initiative” when they began a truly regrettable arc involving a paramilitary unit acting in secret out of the college campus.

For the first season of Arrow, the introduction of Helena “Huntress” Bertinelli in the 7th (“Muse of Fire”) and 8th (“Vendetta”) episodes was a positive turning point.  This was the beginning of Oliver’s transition from murderous vigilante into genuine hero, a transition they are still undergoing with debatable levels of success.  Prior to Huntress’ presence, Oliver had been closed off emotionally, and perfectly willing to kill people to achieve his goals.  However, through the prior introduction of the character of Diggle Oliver was beginning to develop more of a conscious.  Bertinelli then represented a cautionary tale of what he could allow himself to become.  It was through his failed attempt to save her that he realized his need to connect with others, but also to operate by a certain moral compass to help control his actions and target his energies.  Or, to put way more succinctly, Huntress was the Catwoman to his Batman. 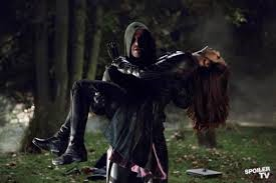 The pairing proved so popular fans demanded a return appearance for de Gouw, who did just that in the aptly titled “The Huntress Returns” later in the season.  Unfortunately, this episode mostly used Huntress as a mechanism by which to enact harm upon Oliver’s then girlfriend as a cautionary tale of the danger Oliver will put any potential spouse into as a result of his secret life as a vigilante.  By the end, Oliver attempts to shoot Huntress in the freakin’ face.  So, yeah, their love not so everlasting.  After that, De Gouw bolted for a regular role on NBC’s limited series Dracula, her pale complexion making her an ideal casting for the Victorian-set show.

Interestingly, what they have done with Caity Lotz this season as Sara Lance, the proto-Black Canary, is to some extent a more successful version of Huntress.  She, too, is a vigilante whose moral code is more flexible than Oliver’s.  However, the difference is that Oliver appears more capable of saving her than he was with Huntress last season.

This similarity between the two is too much to pass up as de Gouw’s return appearance will see her in opposition to both Oliver and Sara.  According to TVGuide, de Gouw will “return in pursuit of her father Frank Bertinelli, who has since been captured and arrested by Oliver, after escaping in the events of ‘The Huntress Returns.’ Helena will once again attempt to exact her revenge for her father murder her fiancee, though she’ll find both Oliver and a returning Canary (Caity Lotz) standing in her way, for an episode aptly titled ‘Birds of Prey.'”

It’s possible Huntress will simply be used to make far more explicit Oliver’s failure with her but subsequent success with Canary as far as rehabilitating sociopaths go.  Or maybe Oliver and Sara’s powers combined will help pull Huntress back from the brink.  However, it could also be the beginning of something big.  In the comics, Birds of Prey is a grouping of female superheroes and vigilantes, traditionally led by Barbara “Batgirl” Gordon and including Huntress and Black Canary among its members.  Though the producers argued it was coincidental, the clocktower used by Sara earlier this season of Arrow looked like an obvious homage or precursor to the clocktower used by Barbara Gordon as a base of operations for the Birds of Prey.  So, they could be slowly building up to some kind of Birds of Prey unit on Arrow. 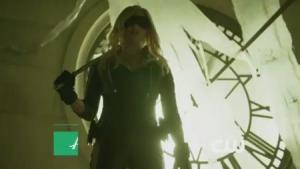 Or the title could just be an homage, that clocktower really was a total accident, and none of this means anything.  We’ll just have to wait.

According to Arrow EP Marc Guggenheim, “We consider Jessica a member of the Arrow family and we’re looking forward to having her back for an episode everyone will be talking about after.”

What do you think?  Looking forward to seeing De Gouw again?  Would have felt differently if “The Huntress Returns” had been a bit better?  Still steamed that I think the Initiative nonsense from season 4 of Buffy was horrible?  Let us know in the comments.