Arrow came out last night and attempted with varying degrees of success (read our review here) to completely blow us away.   It marked the return of Sara Lance to the present day, reuinited her with mom, dad, and pissed off sister, dissolved the mother-son bond between Oliver and Moira, revealed a bit of Felicity’s background, and said to heck with the Felicity-Oliver and Laurel-Oliver shippers by ending with Sara and Oliver about to get jiggy with it.

Now, as is their tradition with big episodes the producers (Andrew Kreisberg, Marc Guggenheim) conducted a Q&A with reporters to discuss the episode and tease what it means for the rest of the season.  They want to keep us talking and excited about the show since the Winter Olympics mean we won’t get a new episode until the end of the month.  There are obviously multiple spoilers ahead as well as some interesting insight into how certain story choices/characters came about.  Read at your own surprise-killing peril:

How was Katrina Law cast as Nyssa al Guhl? 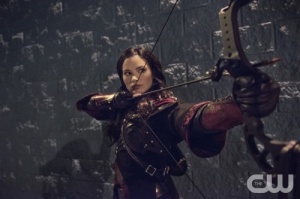 Via EW: According to Marc Guggenheim,“Really, for spoilers, because the [casting] sides always make it out to the Internet, we made up fake sides for Nyssa because we didn’t want to spoil the fact [that she had been in a relationship with Sarah].”  They renamed the character and in the fake script sides, stuck the character opposite Oliver Queen. “So we narrowed it down to Katrina and this other actress, and we brought them both back for chemistry reads with Caity Lotz and said, ‘Oh, by the way, she’s gay. And oh, by the way, it’s Nyssa al Ghul.’”

Why make Sara and Nyssa lovers?

Via EW: According to Andrew Kreisberg, “It was really more about Sarah than anything else.  It’s a pretty chaste relationship from what you see on screen. For us, it touched on a couple of interesting things: the idea that Sara found herself in this terrible world [of the League of Assassins] and found this one person who treated her with love and kindness. And even the way it bounced back off [Quentin] Lance, this hardened, tough cop who’s probably not the most progressive guy — the fact that he was like, ‘I’m just glad you had somebody who loved you and took care of you during those nightmare years,’ those moments felt like they would be special and play for us.”

Via THR: Guggenheim further clarified, “We specifically avoid using the term bisexual; we didn’t want to label [Sara] at all.  Let her be her own person and if the audience wants to label, fine. And by the way, maybe Sara’s had other female relationships in her past, but we’ll get to that in due course when it’s right — if it’s right.”

Why use Nyssa instead of Talia al Guhl?

Via EW: According to Andrew Kreisberg, “And, by the way, we thought of this at the beginning of the season. If you watch 2.05, there’s a reference to ‘the beloved and you think that’s going to keep you safe.’ And we talked about, ‘Well, does Ra’s al Ghul have a son?’ Then we were like, ‘Could it be Talia?’ Then we felt like Talia had just been done in the [Dark Knight] movies. And one of our writers had actually brought up the idea of Nyssa. And it just felt like something new and different.”

So, where does the show go from here?  Kreisberg and Guggenheim weighed in on 11 upcoming storylines (via THR):

Kreisberg: “Part of the reason we did this episode was to free Sara, at least for the time being, from the threat of the League of Assassins, which will allow her to fully be the Black Canary and come home.  You got a glimpse of how some people are very happy and some people are very upset.  You’re really going to see how Sara’s return affects everybody. Hopefully people will be surprised by the reaction.”

2. Not the last of Nyssa 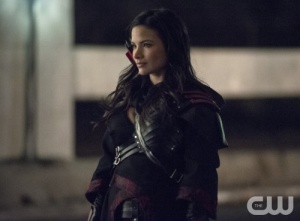 Kreisberg: “As far as the Ra’s al Ghul of it is concerned, this was not Katrina’s only appearance this season.”  In fact, she will re-appear sometime after episode 18, although they’re not saying whether she’ll arrive in the present or via island flashback.

Kreisberg: “There are two massive things that are going to happen toward the end of the season that you heard in that speech [Felicity hinting her mother is a bit of a nightmare while revealing she never knew her absentee father] that will pay off.”

4. Felicity and Oliver stronger than ever

“Heir to the Demon” curiously concluded without any hint as to how Oliver views Felicity after she revealed the secret about Thea.  Moira warned Felicity that Oliver would hate both of them, Moira for keeping the secret and Felicity for being the messenger.  Moira, as it turns out, was just making a desperate Hail Mary pass.  According to Kreisberg, the ordeal will actually strengthen Felicity and Oliver’s bond.  Guggenheim further clarified, “I don’t even think Moira necessarily believed what she was saying to Felicity. Moira was manipulating Felicity into staying silent. It would never even occur to Oliver to be angry at Felicity; all Felicity is is the messenger here. I think his anger is correctly directed at Moira.”

Kreisberg: “For [Moira’s] arc this season, it’s really about redemption. She went to jail and kind of got away with it. She still hasn’t really paid for what she did and in this episode, again she’s paying off doctors, she’s threatening Felicity, she still hasn’t had her ‘come to Jesus’ moment despite what you think would be rock bottom — and that’s coming.  This is a fracture to her relationship with Oliver that is not going to be mended in an episode.”

Guggenheim: “There’s a great scene between Oliver and Thea about this territory in episode 17, where both Stephen [Amell] and Willa[Holland] are absolutely phenomenal together.  There’s so much in the Queen family that is impacted by just the amount of lies — not just Moira’s lies, just lies all over the place in this family. Almost every episode [after] this one really deals with the ramifications and different dimensions of all those lies. Can you have a family, even, based on lies — with so many lies present?”

7. Oliver’s power as presumptive leader of the ever-growing Team Arrow starts to diminish

Kreisberg: “Oliver’s swift hand will be met with more resistance.  With Sara, you’ve got somebody who in a way is Oliver. She went through everything Oliver did. She’s the female him and sometimes the two of them have conflict because it’s like he’s talking to himself.” Episodes 14, 17 and 18 will deal with the addition of Sara to the team from “different vantage points,” episode 14 focusing specifically on how Felicity reacts to Sara being around.

8. Are Oliver and Sara a couple now?  Not even they know

Kreisberg: “That’s part of the journey of the next five episodes is Oliver has not had many successful relationships and part of he and Sara moving forward is, is this something that could work?”

Slade’s threat to take care of Moira after she announced her campaign for mayor against Sebastian Blood is “a long-tail thing that will pay off” according to Guggenheim.

10. Their version of the Suicide Squad 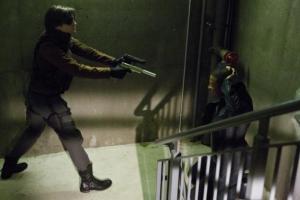 Via EW: Episode 16 has the title “Suicide Squad,” and involves Arrow’s version of that comic book team-up of incarcerated villains working for the government in exchange for commuted sentences.  Kreisberg: “Dig was our way into Amanda Waller, and in this episode, Amanda comes to Dig and Lyla…and basically recruits Dig for a mission and basically tells him that he’s going to need a team and she saddles him with the Suicide Squad, including Floyd Lawton.”  The episode will show flashbacks to Diggle’s time in Afghanistan told from his perspective since they will revisit the story that Diggle shared last season about him saving the life of a warlord named Golam Kadir.

11. Their version of the Birds of Prey

As previously discussed, episode 17 will be titled “Birds of Prey” and involves the return of Jessica de Gouw as Helena “Huntress” Bertinelli.  Considering that both Huntress and Black Canary are long-time members of the comic-book female team-up group called “Birds of Prey” what does this mean for the show?  Kreisberg (via EW): expect “the Arrow version of Birds of Prey [rather] than…a direct adaptation.” Guggenheim: “We gave ourselves room to grow and evolve that. … You’re not going to end up with the holy trinity of Oracle, Black Canary, and Huntress right out of the gate.  We’ll get there.”  Many fans have wondered if maybe Arrow‘s Birds of Prey would include Felicity functioning as their version of Oracle instead of Barbara Gordon, as in the comics.  The producers can’t give everything away, though.

So, there you have it.  The next new episode won’t air until February 26th, but now you should have a general idea of where they are taking some of their story lines once they come back.  What do you think?  Has this all only fed into your fandom, or with what’s been going down lately and what the producers say is coming up are you a disgruntled fan at this point?  Or can you just still not believe they had Oliver and Sara hook up like that?  Let us know in the comments section and/or check out our Arrow episode reviews.