Comic book fans used to have a saying, “In comics, no one stays dead except for Bucky Barnes, Jason Todd, and Uncle Ben.”  Then all 3 of those characters were revived between 2005-2006, although Ben turned out to be an alternate universe version because soap operas ain’t got nothin’ on comic books.

So, it is with a bit of a well-earned yawn that we greet the news that Marvel is going to kill off Wolverine in a four-part mini-series rather matter-of-factly titled “Death of Wolverine,” with the first issue going on sale this September.  Once upon a time, that would have seemed like genuine news instead of an obvious sales ploy.  That doesn’t mean the “Death of Wolverine” won’t be awesome or is without merit (unlike most other superhero deaths, it’s not like someone can just replace the outgoing guy and easily become the “New Wolverine”).  It just means even before the first issue goes on sale we’re already waiting to see how long they’ll be able to resist bringing him back, especially since Hugh Jackman is still around playing the character on film in Days of Future Past (due next month), X-Men: Apocalypse (due 2016), and another solo Wolverine film (due 2017).  Killing Robin off in the mid-1980s or Superman in the early 90s seemed like big deals at the time.  Wolverine?  Just a way to crank out some new story lines for the X-Men and the many, many other Marvel titles which Wolverine has invaded over the years.

So, let’s take a selected look at some of the most notable superhero (or superhero sidekicks) deaths in the comics to see how long this kind of thing lasts:

1) Bucky Barnes, aka, The Winter Soldier

Method of Death: Near the end of WWII, he failed to disarm Baron Zemo’s experimental drone plane equipped with a bomb.

Method of Return: Back in WWII, Russian operatives recovered Bucky’s body from the wreckage, discovering the trauma had left him with amnesia as well minus one of his arms.  So, the Russians gave him a new bionic arm and reprogrammed him to become a super soldier assassin with the codename Winter Soldier, storing him in cryogenic stasis in-between missions to prolong his life.  He only regained his memories during a battle with Captain America in the present day.

2) Barry Allen, aka, The Flash 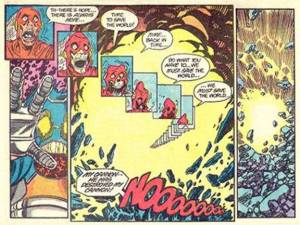 Method of Death: Created a speed vortex to stop an anti-matter cannon from destroying the Earth, but the resulting power becomes too much for his body.

Method of Return: He basically just appears out of nowhere, emerging from the speed force attempting to stop a bullet from killing one of the good guys.  The exact nature and reason for his sudden return would be teased out for quite a while.

3) Jason Todd, aka, the second Robin 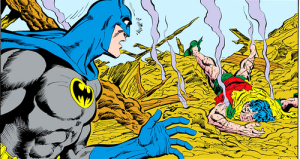 Method of Death: The Joker beat him senseless with a crowbar, and locked him and his birth mother in a warehouse with a bomb set to go off.  Fans got to call in and vote whether or not Jason Todd would survive, with 5,343 voting for death, 5,271 voting for survival.  So, in the next issue, Batman didn’t make it to the warehouse in time to save Todd.

Method of Return: Superboy punched a hole in reality causing temporal shifts which restored Todd to life, awakening from his grave and wandering into the world to ultimately become the deeply bitter anti-hero The Red Hood. 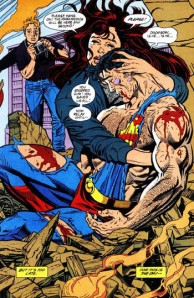 Method of Death: Doomsday beat the crap out of him.  Don’t worry – they were so evenly matched their fight ended with both of them dead.

Method of Return: In his absence, 4 different versions of Superman (one of them a cyborg, the other a deranged clone, etc.) emerged to take up the mantle, but the real Kal-El’s corpse had actually been placed in a regeneration device in the Fortress of Solitude.  Two of the fake Supermen were using the body to power their bodies, but eventually, Kal-El re-emerged, alive, de-powered, and now brandishing a black suit with mullet hair.  The horror. 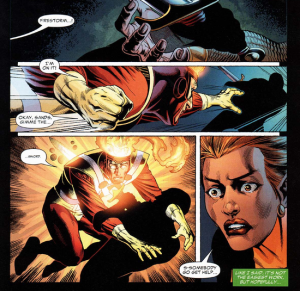 Method of Death: Impaled by a sword, with his Firestorm powers instantly transferring into the body of its next host, Jason Rusch (it’s complicated)

Method of Return: The Green Lantern Corps. villains the Black Lanterns re-animated Raymond’s body meaning he was back, had the old Firestorm powers, even displayed the same sense of humor you’d expect, but dude was straight up evil now.  Eventually, he is returned to the side of good with no memory of his Black Lantern actions, and spent quite a bit of time trying to figure out how exactly he could co-exist with his successor, Jason Rusch

Method of Death: Sharon Carter, brainwashed by the rat bastard Red Skull, shot him at point-blank range outside of a federal courthouse, Larry Flynt-style.  She immediately snapped out of it and proceeded to feel awfully sorry for having just killed ex-boyfriend and all-around nice guy Captain America.

Method of Return: The gun Carter used didn’t kill Steve Rogers, but instead caused him to phase in and out of reality.  The Red Skull brings his body back into present-day reality, and briefly uses it as his own (cause he can do that because it’s a comic so, you know, shut up).  Rogers soon re-takes his body but does not immediately go back to being Captain America.  In his absence, Bucky Barnes had taken over that title.  So, for a while, there was Bucky as Captain America, and Steve Rogers as the Director of SHIELD.  Plus, there was an Avengers team consisting of Rogers, Bucky as Cap, Thor, and Iron Man.  Rogers took over as Cap when Bucky appeared to perish in battle (don’t worry – he was actually totally fine).

Method of Death: Reduced to a charred skeleton due to a device released by Darkseid, whom he still managed to shoot with a god-killing bullet (like the badass he is, of course).

Method of Return: Darkseid’s device actually sent Wayne’s consciousness into the distant past, and the Justice League managed to meet up with him through time travel and return him to the present

8) Johnny Storm, aka, The Human Torch

Method of Death: Appears to die in combat with inter-dimensional aliens.

Method of Return: Actually, he didn’t die; he was just trapped in the Negative Zone, kept prisoner before leading a rebellion and returning to our dimension only to discover Spider-Man had replaced him on the Fantastic Four.  What?  They’re not allowed to move on.  Storm had actually requested in his will that good ole Spidey replace him in the event of his death.

And now for the hero so nice, they had to kill him twice…wait, how did they kill Spider-Man twice?  Because they had multiple continuities going on at the same time thanks to the Ultimate line of comics, which had returned Peter Parker to just being an adorable teenager with one single, rather big secret.  This is the version of Parker they killed first: 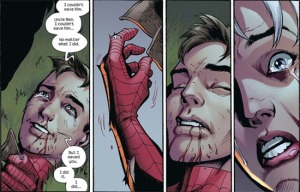 Method of Death: Norman Osborn returns as the Green Goblin and sends Electro, Sandman, Kraven the Hunter, and Vulture after Spider-Man.  However, at the same time, there’s a major throw-down happening with the Avengers in New York, and Spider-Man steps in front of a bullet to save Captain America’s life.  With a bullet in his stomach, Spider-Man, manages to defeat Electro, Sandman, Kraven, and Vulture, and with his last remaining strength, he even neutralizes Goblin, right in front of Aunt May and Mary-Jane since the bad guys had taken the fight straight to Peter Parker’s neighborhood.  Parker collapses and dies in May’s arms, ushered into the afterlife by Uncle Ben, who informs assures him that he’d “done good, kid.”

Method of Return: Actually, this version of Peter Parker stayed dead.  He was replaced by half-black/half-Latino Miles Morales, who anchored his own run of comics as Spider-Man until it was canceled two years later.

So, that Peter Parker died in a final issue published in June 2011.  Then Marvel killed off the Peter Parker from The Amazing Spider-Man, a line which had existed all the way back to the very beginning of the character in the comics.

Method of Death: A dying Doctor Octopus managed to swap minds with Peter Parker, meaning the real Parker died in the disease-ridden body of Otto Octavius.  So, while Spider-Man didn’t technically die Peter Parker sure seemed to, using his final breath from within Octavius’ body to inspire the villain now controlling his body to be a better person, a superior Spider-Man.

Method of Return: Some part of Parker’s mind remained in his body, and though Octavius attempted to suppress it eventually re-took control of his body.

There are many other characters I am missing, to some degree because it kind of seems like every one on the X-Men has died and come back at some point (and every single character in Thor more or less died as part of the Ragnarok cycle before coming back and settling Asgard directly over Broxton, Oklahoma).  However, these are the ones that I as a non-comic-book reader until recently remember hearing about in the media while these stories were playing out in the comics.  Based upon recent history, it would seem like the absolute longest we should expect Wolverine to stay away is 2 years, possibly setting up his return to fall right before the next solo Wolverine film.