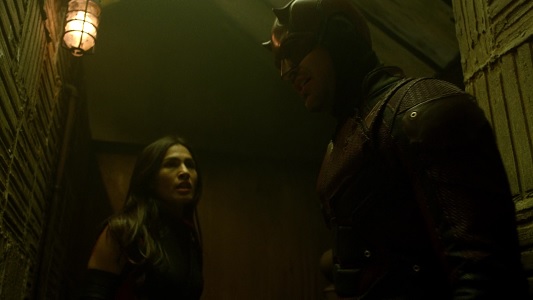 The Great Daredevil Season 2 Binge Is Over, and I’ve Reviewed Every Episode. Let’s Wrap It All Up Now With the Season Finale.

Which One Is “A Cold Day in Hell’s Kitchen”?: Daredevil and Elektra have a final showdown with Nobu. It doesn’t go well. The Punisher at least provides some helpful sharp shooting, but only after Elektra takes her customary sai sandwich to the gut. Don’t worry. The Hand has an app for that. To bring it all home, a montage of everyday heroes in Hell’s Kitchen plays while Karen writes an article about the nature of heroism, unaware Matt is about to finally tell her that he’s Daredevil.

The Hand built a hole in the middle of Hell’s Kitchen for some reason. They turned teens into walking chemical bags, and drained their fluids into some kind of portable chamber. They swore fidelity to Elektra as their mythical weapon Black Sky, but then accidentally killed her. Or was that actually their plan the entire time? Were they always preparing to sacrifice her and bring her back? Or was all of that business with the fluids entering the chamber meant to resurrect someone else, and if so has that person secretly been unleashed already? What the hell is their larger plan other than Stick’s “end of the world” mumblings? What kind of attack, if any, are they planning? Why do they care about Hell’s Kitchen? How is it that Nobu never seems to die (that is until Stick gets to him, of course)?

Last season, Daredevil limped to the finish line, but at least it finished. Daredevil beat Kingpin. Nelson & Murdock made their first big case, and those two friends made up. It was a complete season. There were some obvious plots left over, such as the looming romance between Karen and Matt, the mystery surrounding Stick’s weird assassination of a child and the obvious “Did they just completely forget about Claire?” question. Yet the primary story being told across those 13 episodes reached its natural conclusion.

Season two, by comparison, takes off on a full sprint in its final two episodes before simply stopping as opposed to actually finishing. I’m fine with them going out on a cliffhanger teasing the inevitable resurrection of Elektra. That’s not the part that bothers me, partially because, as I inadvertently discovered in my last review, Elektra’s legacy in the comics is that she died and came back again. Plus, comic book-anchoring characters in Arrow, Flash, Supergirl, Legends of Tomorrow, Daredevil, Jessica Jones, Agents of SHIELD and Agent Carter don’t generally die, and when they do it’s temporary. Elektra’s implied resurrection will likely inspire plenty more “When is a comic book show actually going to kill someone for good?” essays, and it certainly charts an even more comic book-y path for Daredevil season 3. 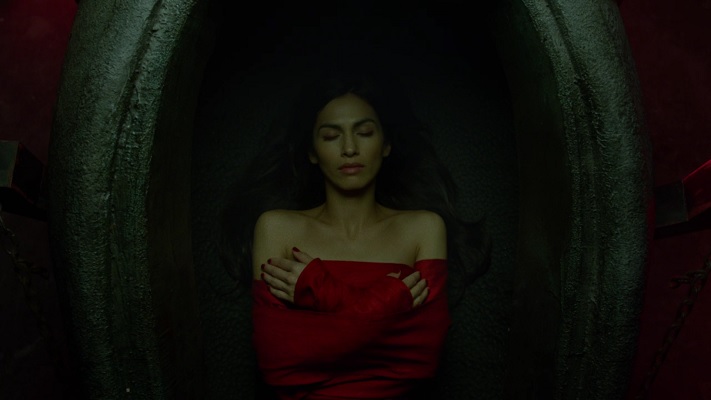 At the moment, though, the more pertinent question is why we have to wait for season 3 for that to happen. Based upon some of the other reviews I’ve read, a lot of people are completely enamored with Daredevil season 2, specifically its breakneck pace. However, where others see invigorating forward momentum in these final episodes I see frazzled scrambling that is only elevated by Charlie Cox and Elodie Young’s performances, specifically their parting speech about running away together. Those two work exceptionally well together, from her calming him down and focusing his ability to him convincing her she can be whatever she wants despite all the doom and gloom from Stick and The Hand.

Perhaps this is a season less defined by plot and more by emotion. The specifics of the situation need not matter if you buy into Matt and Elektra’s tearful goodbye, and root for Matt to throw Nobu off that dang roof. Stay down, you freakin’ immortal ninja! Matt had finally accepted that he loves being Daredevil, and Elektra brought that out of him. They were going to gallivant together across the globe to get away from you. There was to be much fight-flirting and slow-mo sex. But now Elektra is gone. Screw plot holes or, indeed, the literal gigantic hole in the middle of the city. Give me emotional resolution!

Last season, Wilson Fisk had a plan. It may have been an astonishingly mundane plan, but it was at least a plan. I understood who he was, where he came from and what his goals were. This season, Nobu and The Hand’s plan is to….um….capture a female ninja and worship her even though she keeps trying to kill them? Maybe to kill her and bring her back wrong, Pet Semetary style, thus turning her into their greatest living weapon? Fine, but to what end? Once they make her into a weapon they’ll…do bad things, man. Bad things! But Dardevil will be there to stop them. 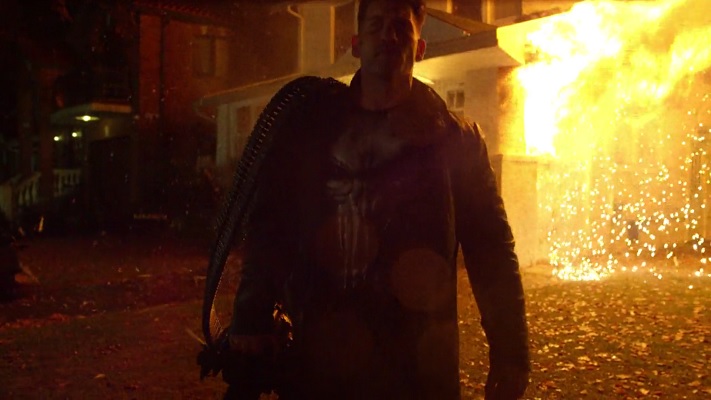 Oh, that is a proper end to the Punisher arc. He returns home for the first time all season, and then he sets the place on fire, walking away without even looking back like the badass action hero he is. For good measure, he pops by Daredevil’s rumble to shoot a couple of guys, stands tall and exchanges a nonverbal goodbye with Karen before heading off into the night.

Yeah, but did we ever get a true explanation for that police sting, the mysterious “Blacksmith” and why his military buddies turned on him?

We’ll get to all of that in his own series.

Doesn’t that inherently short change this season of Daredevil? We got Punisher’s origin story, but only just enough to make him so intriguing we’ll want to see his own series. Good for him, but not so good for Daredevil season 2.

What’s that nitpicking your throwing out? I can’t hear you. I’m still re-playing him walking away from his burning house, but I’m imagining metal music playing over it. Ooooh, maybe the John Wick soundtrack instead. That would be perfect!

What happened in Kandahar? Were Frank’s military buddies all working for Clancy Brown who was actually the “Blacksmith” and thus the one who set up that whole sting just to kill Frank’s family?

Yeah. Probably. Mean Clancy Brown said something about all of that heroin on the Usual Suspects boat Frank was supposed to die on. He was totally “Blacksmith”, but who cares? Punisher is such a bad-ass. Didn’t you see how cool he looks in his skull T-shirt.

What was on the “Micro” CD?
Dunno. Can’t wait to find out on Punisher.

Did Punisher and Daredevil ever really resolve their ethical debate about the proper way to deliver vigilante justice?

Sure. Daredevil did the sign of the cross after talking about killing someone, and Punisher realized his good pal Red just doesn’t have it in him. Matt did throw Nobu off that roof though. For all he knows, he killed Nobu. Some men need killing after all.

What about Punisher and Karen?

They’ll email each other. She’ll write stories about him in the paper. It’s fine. We’re good. Why does any of this have to be a bad thing? Now we just have that much more to look forward to on Punisher.

What if they don’t do a spin-off, though?

You shut your freakin’ mouth!

No, seriously, there’s no guarantee Punisher will get his own show.

Then he’ll come back in Daredevil season 3. They’ll go out for coffee. Beat up some random criminals. Matt will go to confession and say seven Hail Marys and fifteen Our Fathers. It’ll all work out. Later, they’ll take down Kingpin together. “Come out to the coast, we’ll get together, have a few laughs…” and all that, except there will obviously be no laughs. In fact, they won’t even smile. 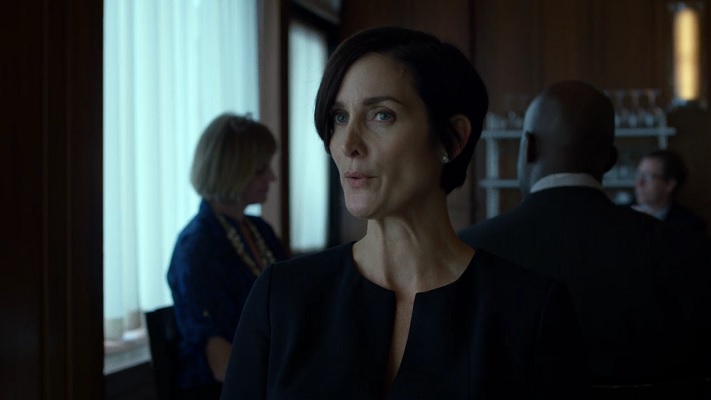 In retrospect, this is the obvious Jessica Jones cameo for them to make, and it suggests Foggy could somehow be a part of Jessica Jones‘ second season. It also means the dissolution of Nelson & Murdock, which sort of circles back around to an earlier argument I made that eventually superhero TV shows drop any pretense of the heroes of having dual lives. With Nelson & Murdock over, Matt can just be Daredevil all the time, embracing it the way he tried to with Elektra before she, well, you know.

However, looking back at the season I wonder if they pushed Foggy and Matt too far apart, never departing from the primary sticking point that Foggy doesn’t approve of Matt being Daredevil. Then again, perhaps that is a principled stance which is true to Foggy’s core identity and thus unchangeable. Plus, Matt’s Daredevil life so thoroughly screwed him over for almost the entire season.. Then he got his dream job as a direct result of it. Mazeltov!

4. The Billy Club Looks Perfect, But Why Did We Have to Wait the Full Season to See It? 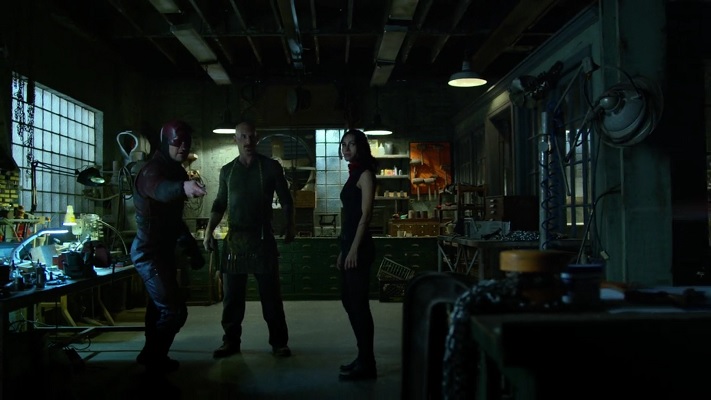 In many ways, Daredevil flipped its usual formula this season. The big bad didn’t show up until over halfway through, if you can even truly call Nobu the big bad. Punisher and Elektra came at us in mini-waves. However, one formula which stuck was delaying the reveal of iconic costumes and accessories until the season finale. It is only in “Cold Day in Hell’s Kitchen” that we see Elektra and Punisher in their final costumes just as it was for Matt and the Daredevil costume last season. However, he also finally got his billy club in “Cold Day,” and Elektra had the perfect response: “Where’s mine?” The billy club is absolutely perfect in action, but why did they take so long to get to it? It didn’t really have to be saved until the finale.

Here’s how this could have gone: 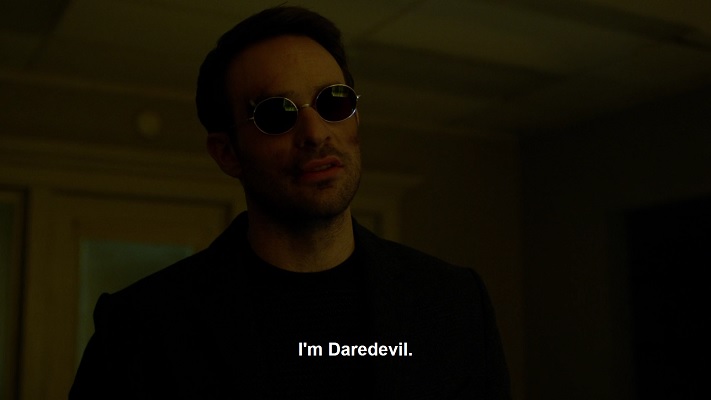 Karen could have then said:

To which Matt would say:

On to the next…actually, that’s it. No more episodes. No word on a third season or spin-offs for Elektra and/or Punisher. Still no dates for when Jessica Jones season two, Iron Fist season one or The Defenders will premiere. All we know is to look forward to Luke Cage on September 30th.