After days of rumors, Greg Berlanti just confirmed in a THR interview that Warner Bros. is indeed developing a Booster Gold movie which he hopes to direct from a script to be written by X-Men: The First Class and Thor‘s Zack Stentz. Who’s Booster Gold? And why could this be exactly what WB needs more of in its fledgling DC Cinematic Universe? More on that in a minute, but, first, a quote followed by a discussion about Deadpool and Suicide Squad:

These are the words of Kevin Feige, thanks be to Marvel god. He could have been referring to one of his own movies (like Guardians of the Galaxy or Ant-Man), but he wasn’t. Instead, he was referring to the competition, complimenting Fox and director Tim Miller for turning Deadpool into one of the biggest success stories of the year. As Feige told Deadline, Deadpool scored so big at the box office because it was a fresh spin on an overly familiar genre, and Miller and Ryan Reynolds clearly made it a goal to honor the spirit of the source material in both the finished film and related marketing campaign.

Warner Bros. already has DC’s version of Deadpool, Harley Quinn, but they’re potentially wasting her in a team-up movie (Suicide Squad) which will have nothing in common (in terms of plot or spirit) with Amanda Conner and Jimmy Palmiotti’s light-hearted, self-aware, anarchic Harley Quinn books (the solo title, Gang of Harleys, Harley Quinn & Power Girl, Harley Quinn’s Little Black Book) which have elevated the Joker’s ex-girlfriend into one of the top-selling characters in all of comics.

Yet Suicide Squad still manages to draw your attention for one important reason: it’s something different. It’s a movie with no heroes, just supervillains.

You could quibble about that. No heroes? Batman’s in it! Yeah, but just in flashbacks (as far as we know). Something different? Bullshit. It’s more like an exaggerated, Earth-bound Guardians of the Galaxy. Plus, what will this be, the 4th live-action Joker (ignoring whatever the heck Gotham is up to)?

None of that matters, though. Suicide Squad simply feels different (or at least the studio wants us to think so). As Vulture recently argued, that’s been the name of the game this year, and the one movie which went the traditional route (X-Men: Apocalypse) has failed to garner any buzz as a result:

“This is a year where most superhero pictures are moving beyond the team-fights-bad-guy archetype. Civil War and Dawn of Justice both focus on good guys fighting each other, Suicide Squad is going to be about a team of villains, Deadpool was a fourth-wall-breaking send-up of the whole genre and Doctor Strange will revolve around magic. Apocalypse’s trailers make it feel rote by comparison.”

Booster Gold isn’t Deadpool. He’s definitely not Harley Quinn. He doesn’t break the fourth-wall. Heck, he doesn’t even have his own solo series right now (Booster Gold published its last issue in 2011.) There’s a strong chance he simply ends up in his own TV series (Berlanti previously developed a potential Booster Gold show for SyFy) or as a regular character on Legends of Tomorrow (considering his association with Rip Hunter in the comics).  But I’m telling you right now I’d watch the hell out of a Booster Gold movie from Greg Berlanti and Zack Stentz. At the very least, it would be something different.

So, who the heck is Booster Gold? It’s insane that I’ve gone this far into the article without explaining that, right? Here’s a link to his Wikipedia page, but allow me to sum it up: He’s a failed athlete from the future who travels back in time and pretends to be a superhero for the purpose of attracting corporate sponsors and making boatloads of money.

It’s kinda, sorta, just maybe, probably not really like Peter Parker becoming a wrestler to make money off of his powers before Uncle Ben died.  Except there Parker was trying to make the selfish best (yay, money!) out of a bad situation (stupid radioactive spider giving me these weird powers). Booster doesn’t actually have any powers. In a way, he’s more like Iron Man. 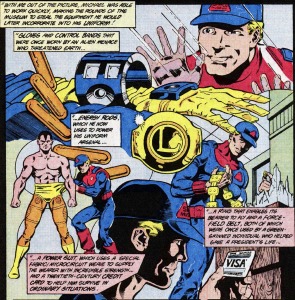 Real name Michael Jon Carter, Booster is actually just a night watchmen at a 25th century Metropolis museum where he learns all about the history of superheroes and supervillains and keeps guard over some amazing pieces of technology. Eventually, with the help of a robot at the museum he steals the technology he needs to travel back to our present and pretend to be a superhero, using his knowledge of the history to stage “high-publicity heroics.” If corporations approve of his superhero activities then maybe they’d like to put their logo on his costume, which he’s open to for the right price.

He is someone whose goal is to financially exploit the public’s fascination with superheroes, and we are currently living in a perpetual state of superhero saturation. A Booster Gold movie inherently promises some degree of parody, particularly with the overly affected mannerisms Booster would adopt in his efforts to resemble what we think of as being a superhero. There’s also a potential for running jokes about superhero consumerism, giving us a “superhero” who would more resemble a Nascar driver with the number of sponsors on his suit. Beyond that, it would make time travel fundamental to its plot in a way no superhero movie has other than maybe X-Men: Days of Future Past.

Most importantly, it could be different, clever, hilarious and all sorts of wibbly wobbly, timey wimey. Berlanti and Stentz could easily turn Booster Gold into a fantastic mix of Ant-Man, Night at the Museum and take your pick of any number of time travel movies. Or they could look to add another layer by looking at buddy cop comedies if this should turn into a Booster Gold and Blue Beetle movie, as the two regularly team up in the comics.

Eventually, of course, Booster’s origin story delivers the humbling moment where he goes down the “with great power must also come…” road. He learns to become a hero. Before he even gets to that point he has to deal with the frustration of his plan not initially working with the general public turning a blind eye to his heroics since they’re too preoccupied with the Justice League, as depicted in the Justice League Unlimited episode “The Greatest Story Never Told” (a classic episode heavily indebted to another classic episode of a different show, Buffy the Vampire Slayer‘s “The Zeppo”):

My one real reservation with a Booster Gold movie is I’m not sure his costume translates well to live-action. Here it is in Smallville (starting at the 2:21 mark):

What do you think? Would Booster Gold make for an amazing movie, or better TV series? Are you confused as to how exactly this would tie into the other DC movies? So am I, but that can be worked out down the road, right?