There’s a familiar crack of the whip which opens The Boss. It happens before you see Melissa McCarthy. Heck, it happens before a single line of dialogue has been spoken, yet that whip is the first thing you hear. That’s because it’s the sound effect which accompanies the vanity card for Will Ferrell and Adam McKay’s production company, Gary Sanchez Productions:

This happens during what might seem like the most inconsequential portion of any movie: the pre-credits parade of production company logos. However, if you actually pay attention to the logos you’ll notice how many of these production companies have become recognizable brands. For example, a Blumhouse Productions logo virtually guarantees you’re about to see a micro-budget horror movie. A Syncopy logo means you’re seeing a Christopher Nolan movie. And that Gary Sanchez Productions logo, whip and all, means you’ve knowingly signed up to see a purposefully dumb comedy.

There are, of course, some exceptions. Through G.S.P., Ferrell and McKay have produced the occasional oddball effort, such as black comedies Bachelorette, Welcome to Me and Sleeping With Other People and even an action movie, Hansel & Gretel: Witch Hunters. However, it has primarily been the logo in front of thoroughly broad comedies like Step Brothers, The Other Guys, The Campaign, Anchorman 2, Tammy, Get Hard, Daddy’s Home and now The Boss.

With a track record like that, shouldn’t you know exactly what you’re getting from The Boss? In fact, this is easily the most Gary Sanchez Productions-esque movie Melissa McCarthy has ever made. The Boss is broader in concept and tone than Tammy, which pretended to be a standard McCarthy comedy when in fact it contained reflections on inter-generational conflict, alcoholism and death. The Boss is far less concerned with narrative than Bridesmaids, Identity Thief, The Heat and Spy. Heck, it’s even less concerned with narrative than some of those Will Ferrell G.S.P. movies, like The Other Guys and Anchorman 2. 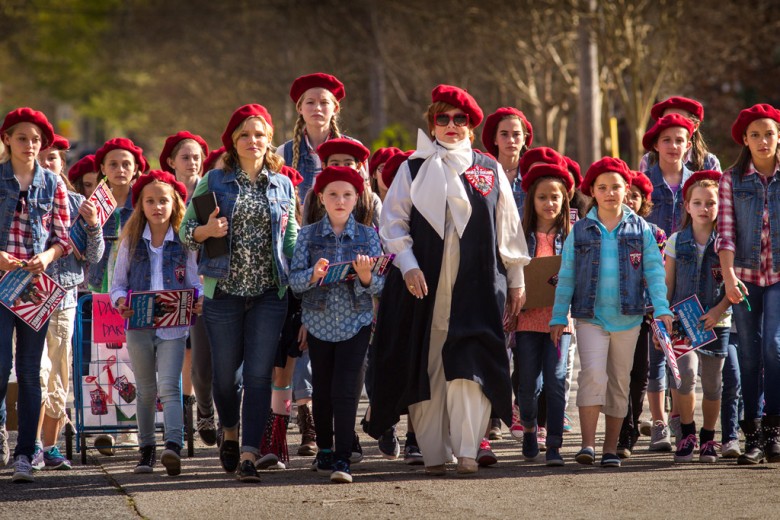 Oh, there is a plot. McCarthy plays Michelle Darnell, a character she created over a decade ago at the Groundlings, seemingly basing her on media mogul figures like Martha Stewart, Leona Helmsley, Tony Robbins and Suze Orman. Darnell quickly falls from grace and does prison time for insider trading, a white collar crime which isn’t really a crime since everyone does it, or so Darnell claims. Once out, she is forced to move in with her former assistant Claire (a “just happy to be here” Kristen Bell), a single mother with an adorable daughter. Within weeks, Darnell starts Darnell’s Darlings, “a for-profit girls club fundraising enterprise with Claire’s daughter, putting them in ruthless competition with a Girl Scouts-esque group as they sell Claire’s delicious brownies.”

The Boss progresses through all of this quite quickly and somewhat lazily. Michelle’s entire prison stay is communicated to us through one scene of her playing outdoor tennis with little oversight, clearly implying, but declining to completely explore the idea that she has ended up in the type of correctional facility which only rich people go to. Her post-prison bout with depression is completely contained to her watching Dr. Oz for one minute before a clearly annoyed Claire announces, “It’s been three weeks, and you haven’t left my couch,” even though there had been no other indication any significant amount of time had passed. Claire’s romance with office mate Mike (Reaper and Deadbeat‘s Tyler Labine) oddly goes away after their first date and comes back much later as if they suddenly remembered that was a thing they were doing in this movie. And Darnell’s Darlings rise so quickly you might glance at the imaginary (or actual) watch on your hand to notice that they seem to wrapping things up far earlier than usual.

Of course, there is a third act twist. The characters fight and separate before coming back together for a completely bonkers heist, and Pete Dinklage is around as the nominal villain Renault, who used to simply go by Ron in the 90s before Darnell seduced him and used him in her climb to the top. Now he’s “Renault,” a member of the deliriously rich who has achieved all he wants in life other than getting back at Darnell for her betrayal. He’s more quirk than character, despite Dinklage’s best efforts.

There is an element to all of this that almost feels like Bel Falcone, who directed and co-wrote the script with McCarthy and Steve Mallory, is telling the audience, “Look, you’ve all seen this kind of movie before, right? You pretty much know where all of this is going. Let’s just skip some steps so we can include more jokes.” Why focus on Michelle’s emotional fallout when all of her so-called friends turn on her after her prison stay when you can instead have her randomly fall down some stairs and mutter something about hurting her pelvis?

In that sense, The Boss is the most undiluted showcase for Melissa McCarthy’s comedy I’ve ever seen. She is not concerned with poking fun at genre roles or gender conventions (Bridesmaids, The Heat, Spy). Her character doesn’t have some tragic backstory (Identity Thief), or at least not one which the movie takes overly seriously. There’s no alcoholic grandma who helped make her the mess she became (Tammy).

Instead of any of that, Michelle Darnell is quite simply a joke-delivery machine, firing off improvised, rat-a-tat-tat, quite often sexually charged one-liners, behaving wildly inappropriately around children and falling down with alarming frequency. Even when Michelle gets her “This is why I am the way I am” moment The Boss undercuts it with repeated jokes. She is only as likable as McCarthy’s inherent intelligence and complexity conveys, and little quirks you expect to pay off (like why she exclusively wears turtle neck sweaters) never do. But holy crap does she ever know her way around a joke, including one inspired bit about a potential Girls Scout badge which would include a picture of a housewife on her knees, bent over in front of an oven and….well, I don’t want to spoil the punchline.

That’s because the jokes are easily the best part and primary focus of The Boss. It lives to amuse us. Based upon both the critical and fan reaction thus far, most people would argue it only succeeds in amusing itself, as indicated by all the laughs in the closing credits outtakes. However, truth be told, I had a good time with this movie. It’s the most weightless thing McCarthy has ever made (if you think I used “weightless” as a pun about her actual weight then you must think me no better than Rex Reed), and even by Gary Sanchez Productions standards it is astonishingly inconsequential. Even Anchorman 2 attempted to make some kind of commentary on the rise of the 24 hour news cycle.

By comparison, The Boss is not here to provide any kind of commentary on the one-percenters, i.e., the lifestyles of the clueless, douchebag rich. Its riches to rags story contains an inherent social relevance which its story completely squanders. However, I absolutely could not resist the charms of McCarthy commandeering her own glorified Girls Scouts and leading them into an Anchorman-esque mid-movie rumble, eve if it ultimately has no larger bearing on the plot. I would happily re-watch Michelle going toe-to-toe with her Girls Scout rival and promising remarkably specific and authoriative bodily harm to her face before pretending everything was completely cordial the moment she stepped away. 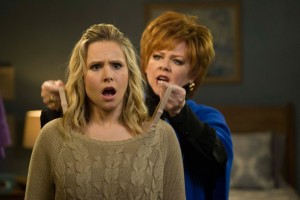 So much is discussed about the need for more diversity, both in terms of gender and race, in front of and behind the camera in Hollywood. However, sometimes you can get lost in the statistics and forget about the meaningful impact such change will have on the end product. There is a scene in The Boss which is a stark reminder of why we benefit from having more female voices involved in the creative process.

Prior to going on her first date with Mike, Claire presents her chosen outfit to Michelle, who then teases her mercilessly about how terrible her breasts look in the shirt. It turns into a back-and-forth between the two about how to best showcase that part of the female anatomy on a date, and we learn that Claire is still wearing one of her old nursing bras which do nothing for any kind of aesthetic appeal but are extremely comfortable. There is an authenticity to this joke, both because Kristen Bell and Melissa McCarthy are mothers in real life and also because McCarthy co-wrote the script. It reminds me of the Spanx scene in The Heat. It’s a female point of view coming through, speaking to one half of the audience that nods in understanding and then to the other half who asks, “Is that really a thing you women do?”

18% – “Melissa McCarthy remains as fiercely talented as ever, but her efforts aren’t enough to prop up the baggy mess of inconsistent gags and tissue-thin writing that brings down The Boss.”