I first became aware of Arrow’s existence through a little blurb in Entertainment Weekly‘s 2012 Fall TV Preview edition. There was a picture of a shirtless Stephen Amell and a paragraph with quotes from the producers which more or less boiled down to: “Please give us a chance. We’re going to be a lot better than Smallville, we swear.” I couldn’t believe how good Amell’s body looked, especially since he’s just a year older than flabby ole me. More importantly, I couldn’t believe the CW was seriously going to the DC well again so soon after the progressively mediocre Smallville, which had been mercifully put out of its misery just a year prior. On top of that, they were using a character we’d already seen played by Justin Hartley for over half a decade. “Arrow? I give it 1 season, 2 tops,” I thought.

Arrow has now reached 100 episodes, with lucky #100 being “Invasion!”, the second part of the big “Heroes Vs. Aliens” crossover event. Arrow isn’t buried in a tiny little blurb in EW anymore; it graces the damn cover of the magazine (alongside Flash and Supergirl in EW‘s big story hyping up “Invasion!”). The producers don’t have to beg anyone to watch Arrow or any of these Arrowverse shows (well, there might still be some begging with Legends of Tomorrow). Marc Guggenheim, the only one of Arrow‘s three co-creators to actually stick with the show rather than bolting for a spin-off, is particularly relishing the moment, giving multiple interviews to press outlets, inadvertently reigniting the Olicity wars in the process.

As is his way, Stephen Amell took to Facebook to celebrate the occasion:

The fans, from all over world, young and old… whether you discovered Green Arrow in the 1940’s or you discovered the show somewhere between October 10, 2012 and tonight, thank you. This experience has fundamentally altered the lives of more people than you can possibly imagine. What a ride. And as the caretaker of such a beloved character and the representative of such a rich history, I have always tried my very best to keep you entertained. I will continue to do so.

While Arrow has clearly proved everyone wrong since the time it was simply that weird show no one particularly asked for starring some guy no one had ever heard of it’s also taken several regrettable detours along the way (e.g, remember Oliver’s son?). Coming into tonight, there was every reason to believe Arrow was again setting itself up for disappointment. The key to season 5’s creative rebound has been a return to the show’s gritty, street-level roots, yet here’s episode #100 falling in-between a ratings stunt crossover with Supergirl, Flash and Legends of Tomorrow in which the makeshift Justice League headed up by Barry and Oliver must fight off invading aliens. That’s all fine and good for Supergirl, Flash and the Waverider crew, but not so great in terms of a back-to-basics season for Arrow. Surely this storyline would no better fit Arrow than all that business with the hawk people and reincarnation last season.

Funny story about that: Arrow somehow managed to roll with the punches with this alien invasion storyline, and turned in one of the strongest episodes in the show’s entire run. As Thomas Drufke put it on Twitter:

Nostalgic, heart breaking, and meticulously crafted #Arrow100 was just about as clever as Arrow can get. IT WAS AWESOME.

“About as clever as Arrow can get” says it perfectly because compared to other, more ambitious genre shows “Invasion!” likely registered as a standard It’s a Wonderful Life riff involving Oliver and pals stuck in a fantasy world in which the Queen’s Gambit never sank. It’s primary innovation over the likes of Batman: The Animated Series‘ “Perchance to Dream” was instead of one person glimpsing an alternate history it was 5 doing so collectively as if trapped in their very own Matrix. However,  Arrow experimenting like this practically registers as groundbreaking because stylistic and formal experimentations have never been this show’s thing. The bravest Arrow ever gets in that department is occasionally doing episodes where the flashbacks are to something other than Oliver’s personal past, yet here they were doing a Wonder Life/Matrix mash-up. Bravo.

There was also the somewhat undercooked secondary storyline involving the rest of Team Arrow (primarily Wild Dog) teaming with Supergirl and a tired-looking Flash (perhaps the undoubtedly gruelling shooting schedule caught up to Grant Gustin) to fight some cyber girl to steal some piece of technology to help them better understand the aliens. Wild Dog was given an out of nowhere but sensible distrust of metahumans, seemingly just so there could be some kind of story arc going on in this half of the episode. Surprise, surprise: By the end, he changes his mind, and is totally cool with Flash and Supergirl. Curtis and Rory…um….um….well, Curtis cracked some good jokes, and Rory’s religious background helped out when deciphering alien code. Good for them.

Maybe this felt fun but ho-hum because Guggenheim originally wanted to do something with flashbacks, telling TVLine, “I actually took an idea that I had for the 100th episode and moved it to the 101st, and that is ‘flashbacks to Season 1,’ as a new clue surfaces linking the villain Prometheus to Oliver’s past. That was something that I wanted to do for the 100th episode, but there just wasn’t any room to tell a flashback story.”

It ultimately works better this way, allowing everyone in the Matrix to have at least one emotional moment with the people they really need to (Sara with Laurel, Thea with Moira, Oliver with Laurel, his parents and even Quentin) before being paired off with their most notorious enemy (Oliver with Deathstroke, Thea with Malcolm, Sara with Damien). It certainly led to one of the single coolest moments in the long history of Arrow fight scenes:

Poor Diggle and Ray weren’t granted nearly as much (if any) emotional heavy-lifting, but their presence was still appreciated, particularly when Diggle was busting out his Christian Bale Batman voice as The Hood. That nod to the show’s beginning was but one of many countless easter eggs, including the meta reference to Tommy being a doctor in Chicago since Colin Donnell is now a regular on Chicago Med. 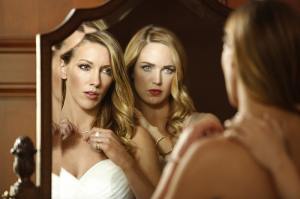 Coming into the episode, one of the biggest selling points (beyond aliens and #100 and so many guest stars) was the return of Katie Cassidy as a fantasy version of Laurel engaged to Oliver, living out the future so many had assumed Arrow was heading for back when Oliver and Laurel seemed like the show’s end game. If you’ve been watching Legends this season you also know Sara’s primary arc has been to come to terms with her sister’s death and her inability to change things despite having her own time machine (space-time continuum and all that). As such, Laurel’s return in this episode was important not just for Oliver but also for Sara.

For her part, Cassidy was certainly a radiant sight for sore eyes, but she was also stuck playing a fantasy version of Laurel, not the real Laurel, mostly there to bring about closure for others and remind us what it looks like when she cries.

This all paid off as expected. Laurel’s presence tugged at heart strings while perhaps making the Oliver-Felicity fans nervous. It’s been a long, long time since Oliver has looked at anyone other than Felicity the way he looked at Laurel in “Invasion!”. A quick scan of Twitter during the episode indicated that, indeed, the shipper wars were raging again, fans on either side of the divide pointing to key moments (e.g., Oliver remembered his romance with Felicity, Oliver told fantasy Laurel he loved her) to support their argument.

All of that misses the point, though. “Invasion!” is not the episode where Oliver reached some conclusion about his affection for Laurel or Felicity. “Invasion!” was about honoring the show’s entire past while also recommitting Oliver to his heroic mission, as Guggenheim told ComicBook.com:

“There’s a reason why these stories are kind of iconic or familiar tropes, even in comic books. It’s because when you show the protagonist the path not taken and you basically put them in a situation where they can choose to stay on that path or go back to their life with all of its ugly aspects and challenges and they choose the selfless choice of returning to that ugly past, it makes your character stronger. It forced Oliver to basically double down on his mission and commit to this life with all of its losses and failures and challenges.”

Thus it was that the most effective emotional moment was not Oliver saying goodbye to his parents or to Laurel but instead Thea, season 5’s oft-forgotten character, begging to stay in the fantasy. She understandably argued what need does the world have for people like them when people like Barry and Kara are out there being genuine superheroes? What good are they in a fight against aliens? They’re just normal people with a thing for archery, and they’ve already paid too high a price. When do the normal heroes get to stop? What is their reward?

But Oliver, the man who only started this in order to fulfill his father’s dying wish, calmly reconfirmed that they do what they do because it’s right, not because of some reward. That’s superhero psychology 101, i.e., with great power (or in this case ability) must also come great responsibility. In this case, it also made for a great episode, at least as great as Arrow gets.

2. Why was the cyber woman doing what she was doing?

3. Sara’s “Lucky for you I’m not a trained assassin” followed by a quick reprise of the League of Assassins score was all kinds of awkward. Way too on-the-nose.

4. Some of those end holograms looked pretty wobbly, especially Tommy and Roy.

5. Like Thea could ever seriously think she looked bad in that gorgeous, form-fitting bridesmaids dress. The real bridesmaids of the world should be so lucky.

6. What exactly did Oliver think was going to happen when he let Thea stay in the fantasy? There’s no way that makes any practical sense. Was he simply guessing she’d eventually change her mind and join them in their fight?

7. Sara stepping into the middle of Diggle and Oliver’s fight with Deathstroke and instantly shoving a sword through his chest was so, so cool. Not a nitpick; just forgot to mention it in the rest of the review.