Sigh. Not with a bang but a whimper.

That’s my instant reaction to Iron Fist’s season finale, which upends all the good work done in the latter half of the season and goes out in the most unimaginative way possible, with ho-hum action and the gall to pretend as if it is actually some huge shock that Harold is responsible for the plane crash 15 years ago.

In fact, I’m not going to do the full recap thing for this review. Instead, here’s what happens: Harold frames Danny and Colleen for Madame Gao’s drug ring. Madame Gao tells Danny Harold orchestrated the plane crash. Danny suddenly has anger issues he struggles to keep in check, something which had been referenced maybe once before. With Ward and Claire’s help, Danny and Colleen storm Rand to retrieve the information that’ll clear their names. Plus, someone’s going to kill Harold, and….oh, just jump to the end. Danny defeats Harold, but Ward delivers the killshot. With crazy dad out of the way, Ward takes over leadership of the company, and Colleen and Danny head off to K’un-Lun but discover it is missing, thus setting up the mystery (“where’s K’un-Lun?”)/potential villain (“who exactly led the attack on K’un Lun?”) likely to spill over into The Defenders.

The first Iron Man movie, Arrow season 1, The Amazing Spider-Man 2 and various other superhero stories have included similar third act reveals where the character-defining tragedy which befell the hero was actually orchestrated by the dead dad’s greedy best friend. Iron Fist brings nothing new to the table in this regard, but even if this is the first superhero show you’ve ever seen Harold’s villainous twist is so heavily telegraphed (and thus easily predictable) that it only serves to make Danny look like an idiot. Again. 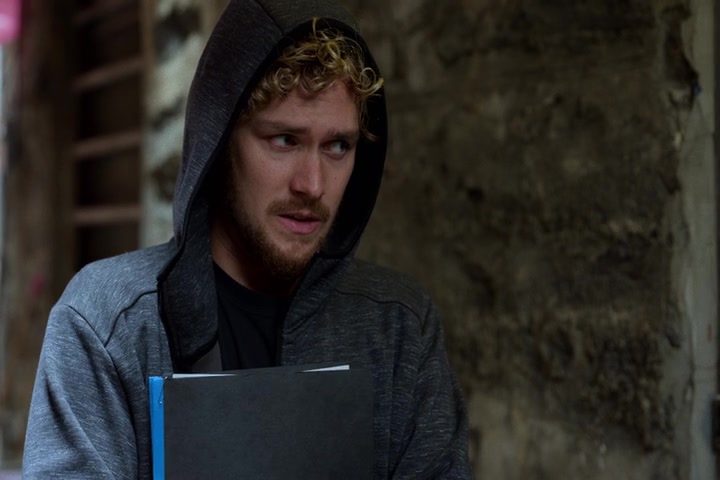 Perhaps that’s the point. In fact, I’m relatively certain that is exactly the point. As Finn Jones told EW, “[Danny]’s craving desperately for family, for help, for guidance, for people to learn from, and for a team. But because of what happens in Iron Fist he’s very untrusting.” This is going to facto heavily into The Defenders in a big way, but it means were just stat through 13 episodes centered around a hero who was easily duped time and time again. Moreover, the way the season was structured often meant we were more aware of what was going on than Danny, with the only genuine surprise being Colleen turning out to work for The Hand. Even then, Bakuto’s time to shine as a potential peaceful replacement for Danny’s former sensei lasted all of 10 minutes since the show saw fit to let us in on his villainous side well before Danny ever caught on.

“You don’t belong in this world” is what Davos told Danny, and the evidence would seem to support him. Danny repeatedly proved himself incapable of truly coping with the cutthroat realities of corporate life. For example, he knows that his dad’s desk still has the stickers he put on it as a child, but from that desk he, on more than one occasions, asked, “Now what?” (as in “What do I do now? How exactly do I go about being a CEO?”) to a blank-faced Hogarth. He also didn’t quite know how to deal with the emotional complexities of simply maintaining friendships or forging romantic relationships, and seemed shockingly undisciplined for someone who spent 15 years studying at a monastery.

However, the point of the season was to position Danny as a bit of a lost soul who didn’t quite belong in New York but also never truly belonged in K’un-Lun. In the midst of this turmoil, Colleen emerged as his emotional anchor, the person he’d look to and say, “Wherever you are is home to me.” To buy that, though, you had to actually buy their romance, which is a big ask considering how quickly Colleen went from “This fucking guy again? Dude, just go away” to looking up at him with lovestruck eyes because, oh, he’s just so dreamy and such a magnetic fighter AND the Iron Fist.

By the end, the show didn’t even seem to know what do with them, undercutting their relationship completely by giving Claire a mic-drop “you two both need serious psychological help” exit speech. Crucially, Colleen spent one of her final scenes more or less staring at the ground and looking sad as Danny announced his intentions to head back to K’un-Lun. She, of course, jumped into his arms when he invited her to go with him, but where was that fiery girl from the first couple of episodes who would have scolded Danny for running away or straight up told him how much she wants him to stay, well before he extended the invitation for her to go with him?

Joy is similarly ill-served by the finale, severing her relationship with both her dad (once she discovers he has framed Danny) and Ward (even though she previously expressed sympathy for the impossible position he had been put in, and now realizes everything he said about their dad was true). She is nowhere to be found when Ward re-assumes leadership of the company even though she is the one who fought so damn hard to re-secure their positions on the board and she is the one who actually loved working there, not Ward.

Instead, she’s off at some Dark Knight Rises-esque café listening to a Madame Gao pitch about killing Danny. The fact that Joy responds to this suggestion with an intrigued “I’m listening” makes absolutely no sense considering her stated views in the prior episodes, such as her insistence that Danny not be allowed to sacrifice himself for her and outrage that her dad would frame him. But, yeah, she’s totally on board with getting rid of him now because he’s the source of all her problems. Sure. That follows.

Of course, it actually is true that once Danny showed up Joy’s life fell apart. The show ultimately seems to be trying to execute a role reversal where Joy and Ward have switched positions re:Danny from the start of the season to the end. Ward now wants peace with Danny whereas Joy might want him gone (or has ulterior motives, such as only pretending to listen to The Hand in an effort to gain their trust). However, Joy deserves better than this off-screen change of heart.

But maybe satisfying conclusions for the female characters is too much to expect from a male superhero show. It is called Iron Fist, not Joy and Colleen Get Shit Done. And in that regard Iron Fist is notable for breaking from the Netflix formula in that by the end of the season I don’t know if we can even say our hero has completed his origin story yet. Unlike Daredevil, Danny ends his first season nowhere close to wearing his superhero costume yet, and while he has achieved his vengeance (just like Jessica Jones and Luke Cage) he still hasn’t mastered his powers or even nailed down what exactly his mission is.

It seems insane that Iron Fist would really take nearly 13 full episodes before Danny finally did something truly awe-inspiring with his powers, yet here we are watching the season finale and finally seeing him punch the ground with such force that it lifts everyone in his vicinity into the air and causes all nearby glass to break. Pretty cool, yet by the very end we’re still left oddly wondering, “So, is he the full Iron Fist now or what?” And the “to become Iron Fist you must sacrifice everything that was Danny Rand” internal conflict, which came and went throughout the season, sure didn’t amount to much.

Perhaps that’s my out line, the perfect summation of this maligned show. Iron Fist: it didn’t amount to much. After a tedious start, it got better, and the side characters had some fairly amazing moments. But, in the end, Iron Fist proved to bes non-essential viewing, and can probably be skipped by anyone looking forward to The Defenders.