Rough Night is a Frankenstein’s monster of a comedy combining equal parts Bridesmaids, The Hangover, Very Bad Things and Weekend at Bernie’s in a story of a bachelorette party gone horribly wrong when the male stripper dies. The more the girls, led by Scarlett Johansson and Jillian Bell as the bride and overly devoted maid of honor who’ve awkwardly grown apart since college, try to dig themselves out of the mess the worse it gets. Hilarity, as the old Hollywood PR hacks used to say, ensues.

Rough Night is also a movie which, like Wonder Woman, is easily politicized. It is only the third R-rated studio comedy directed by a woman, Lucia Aniello, in the last 20 years, and features female characters who casually swear, consume drugs and candidly describe their masturbatory practices. Cue the offended gasp reactions….

…and thinkpieces/profiles taking a hammer to that glass ceiling:

Like just about every aspect of the entertainment industry, comedy has always been a boys club first and foremost — but it’s also been one of the slowest to change […] Sharon Maguire’s Bridget Jones’s Diary (2001) was the last R-rated studio comedy to be directed by a woman until Nancy Meyers stumbled into an R-rating in 2009, because she dared to show Meryl Streep smoke a joint onscreen in It’s Complicated.

Aniello, for her part, only found out about that depressing statistic a few weeks ago. Not that she wasn’t aware of the depressing dearth of women in comedy directing; that fact was part of the reason she’s kept prioritizing directing. “I like it, but also, it felt like there was a demand for more women in comedy directing,” Aniello said, “and I felt like I could supply that demand” (Vox).

Aniello and her longtime writing partner Paul Downs, who also plays Johansson’s beta-male fiance in Rough Night, have been responsible for several webseries over the years, and got their big break when Amy Poehler brought them in to work as writers-directors-producers with Ilana Glazer and Abbi Jacobson on Broad City. Aniello and Downs went on to shape the majority of the show’s best episodes, co-wrote Rough Night to be their feature film debut and brought Glazer with them to play the lesbian activist member of the bachelorette gang. The existence of Rough Night is thus a direct testament to the longheld belief that in order for women to move up in Hollywood there need to be more female producers and studio executives. Poehler opened doors for Aniello, Glazer and Jacobson (as well as Downs) which they never could have opened on their own.

Just another reason to love Amy Poehler, and root for Rough Night to succeed (and be good). 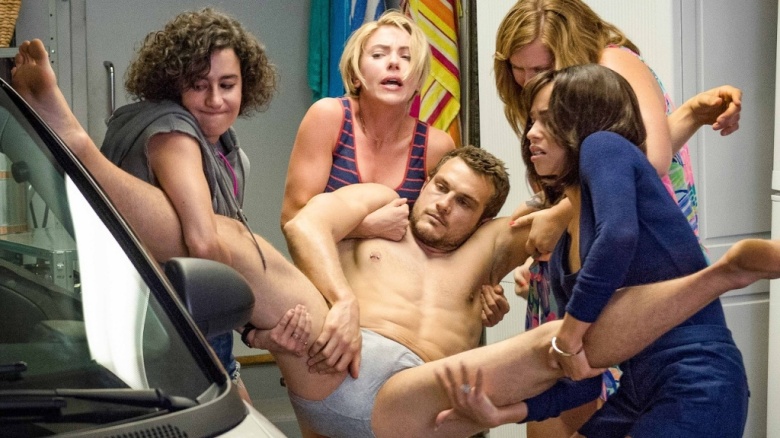 But Rough Night is not as unique as its behind the scenes story would lead you to believe. Yes, it is a movie with a distinctly female point of view, filled with jokes, particularly one inspired gag involving Johansson ingeniously weaponizing her own self-waxing material, which a man never would have dreamed up. However, Rought Night is also part of the larger trend of women taking over the comedy genre in general.

That’s the top highest grossing live action comedies of the past 3 years, and over half of them are female-fronted: Pitch Perfect 2, Ghostbusters, Bad Moms, Spy, Trainwreck & Sisters. In truth, Hollywood has drastically backed away from comedies, live action or otherwise, releasing 34% fewer of them in 2016 than in 2015 and retreating again in 2017. But one growth area seems to be comedies made for women and often by women, either as producer (as with Bad Moms) or screenwriter (as with Ghostbusters) or director (as with Pitch Perfect 2 and now Rough Night).

Last year was especially heavy with comedies where women got to behave just as badly, if not worse, than the men, from those that made a lot of money (e.g.,  Sisters, The Boss, Bad Moms) to those that didn’t (Neighbors 2: Sorority Rising, Mike and Dave Need Wedding Dates). The trend has continued into 2017 with Snatched and Rough Night, soon to be followed by Girls Trip, two Aubrey Plaza comedies (The Little Hours, Ingrid Goes West), A Bad Moms Christmas and Pitch Perfect 3.

It’s no accident. This is a copycat business, and while Bridesmaids didn’t immediately lead to a wave of major studio-released imitators it did launch Melissa McCarthy into stardom. And when year after year produced female-led comedy hits (The Heat in 2013, The Other Woman in 2014, Trainwreck in 2015, Bad Moms last year), and report after report of movie attendance figures pointed to a stagnating male audience but booming female audience the numbers became just too big to ignore. Rough Night might be historic because of the woman behind the camera, but for those who don’t know that it probably seems like another standard Hollywood comedy since these days if these movies don’t star Kevin Hart, Dwayne Johnson or Will Ferrell then it’s usually got a bunch of women in it tearing shit up.

But as with Wonder Woman there are inevitably those naysayers who argue we’re just getting the same old movies we’ve seen a thousand times befores, now with female protagonists instead of male. Trainwreck, for example, might be Amy Schumer’s life story broadly dramatized, but it also pretty much follows the classic Judd Apatow movie playbook to a T. Mike and Dave Need Wedding Dates is just Wedding Crashers with female wedding crashers instead of male. And Rough Night is just a gender-reversed Very Bad Things meets The Hangover. There’s nothing new here, and these films all tend to suffer from the same stylistics problems which plague all mainstream American comedies – too much reliance on improv, too little time put into joke construction.

Fair enough. As we did with the manchild comedies of the early 2000s if Hollywood keeps giving us the same old thing we’ll get tired of it. The drunken comedian falling down and going boom loses its charm eventually, regardless of the gender of the comedian. But, damn, this female-led comedy movement is still young. It’s too early to be tired of it already.

Moreover, if I’m being honest I am a total sucker for dumb comedies, and that’s exactly what Rough Night is. It casts Johansson and Zoe Kravitz as the strait women, surrounds them with talented comedians (Bell, Glazer, Kate McKinnon) and continually throws roadblocks at all of them as they try and fail to get out of an impossibly terrible situation. Tensions flare. Rash words are said and actions taken. A car gets wrecked. A dead body ends up in a sex swing. McKinnon rides a jet ski and speaks in a goofy Australian accent she probably picked up from Chris Hemsworth on the Ghostbusters set. Like I said before, hilarity ensues. 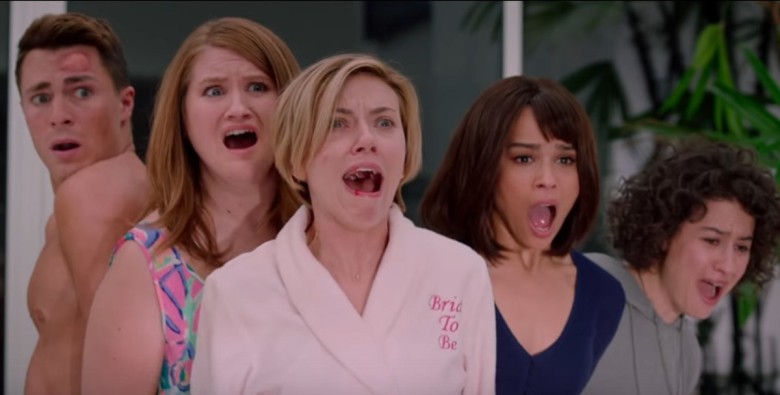 It’s not perfect. There is an undeniably scattershot quality to the whole affair, with the characters moving from one sitcomy sequence to another and not always in the most organic way possible. It doesn’t help that the story continually cuts away to the fiance’s more sedate bachelor proceedings where the script makes the now-standard The Heat/Ghostbusters/Snatched joke about comparitively incompetent, cartoonish males over and over again. He ends up going on an all-night road trip to win Johansson back after a phone call misunderstanding, and several of the cutaways to him in the car or at a rest stop go on for just a little too long.

But I still laughed a lot. Jillian Bell does the Jillian Bell schtick (as seen before in 22 Jump Street, The Night Before, Fist Fight, Idiotsitter) and it’s hilarious. Ditto for Glazer and McKinnon, the latter of whom sometimes steals scenes with little more than a bizarre facial expression. Johansson and Kravitz are capable strait women in the comedy scenarios. Demi Moore and Ty Burrell are good sports as skeevy, swinger neighbors.

Plus, I would push back on the notion that there’s truly nothing new here. The fact that Johansson’s character is clearly modeled after Hilary Clinton – short-haired, running for Senate, plagued by her less than media-ready on camera mannerisms and pitted against a male competitor who texted a dick pic and actually saw the polls go up – matters. Same goes for the film’s ongoing jokes about the the various outlandish ways the U.S. justice system has failed women and why that prevents the characters from simply going to the authorities. Or the way the women use the word “tampon” as an SOS code at the club when they need help fending off a guy they don’t like. Or the fact that there’s an interracial, bisexual three-way which happens halfway through and is not commented upon nor shamed. The different point of view from behind the scenes makes a huge difference here, just not always in the most obvious ways.

Yes, this is a gender-reversed version of various movies we’ve already seen before, but it has a fresh point of view and enough jokes and cast chemistry to make it worthwhile, particulalry if you’re already a fan of Jillian Bell, Ilana Glazer and/or Kate McKinnon.

Heads up to anyone seeing #RoughNight this weekend: There are 2 post-credits scenes, and the last one is crucial to the plot.