Last month, to commemorate its 50th anniversary the MPAA conducted an analysis of every film it has ever rated and reported the overwhelming majority of films released since 1968 have been rated R. Never mind that PG-13 didn’t come into existence until 1984 nor the ongoing hand-wringing over PG-13’s complete takeover of the box office. Nope, just a fun little factoid for you: the R has been the MPAA’s go-to rating for the majority of its existence.

Quick follow-up question: how many times has one of those R’s gone to a comic book movie?

Easy: Deadpool. Logan. Deadpool 2, obviously. And…um…I wanna say maybe Blade? (Correct. Three Blade movies, three R ratings.) Probably anything with Frank Miller’s name in the title or listed among the producers? (Correct: the various Sin City and 300 movies are all R. Oddly, though, the one movie Miller wrote and directed, 2008’s The Spirit, is PG-13.) Anything Alan Moore-connected? (Almost a clean sweep: V for Vendetta, From Hell, The Watchmen, all R. League of Extraordinary Gentlemen, the legendarily terrible film which broke Sean Connery’s spirit, is PG-13.) What about the Mark Millar adaptations? (Yes to all Kick-Ass and Kingsman movies being R.) After that, I dunno, probably some indie stuff? (James Gunn’s Super counts.)

What’s that, like, 18 R-Rated comic book movies over the past two decades? Not bad. I guess.

That might seem like a lot, but it’s still seriously swimming against the current. For example, in the two-plus years since the first Deadpool unleashed its R-Rated antics on the world 21 live action and animated superhero movies have received wide theatrical releases. Of those 21, only 2 arrived with an R rating – Logan and Deadpool 2. Now, Deadpool 2 is about to be re-released in a heavily re-edited – and in some cases re-shot – PG-13 version for the holidays. 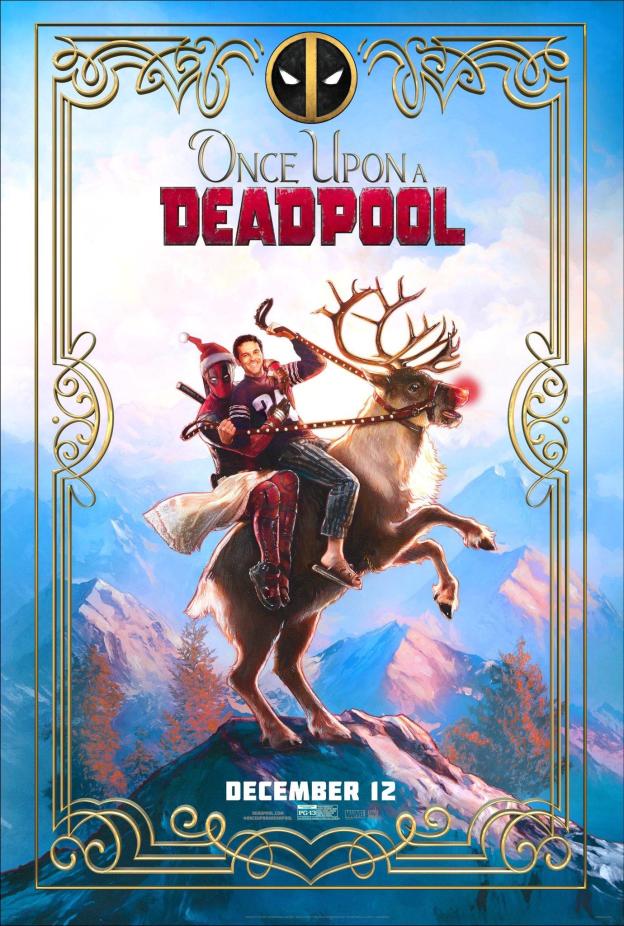 Entitled Once Upon a Deadpool, the nearly-unprecedented move is being pitched as a fun way to allow younger viewers to enjoy the Deadpool franchise on the big screen for the first time in a limited engagement showing, running just two weeks. As Rhett Reese, co-screenwriter of both films and one of the masterminds behind the PG-13 remix, told Deadline earlier this week, “We’ve driven a wedge between parents and their tweens and we hear about it all the time. This [PG-13 revamp] is a way to try to appease those parents.”

Ryan Reynolds, who continually blurs the line between himself and the Merc with a Mouth, chimed in, “Fox has been asking for a PG-13 basically since the start in 2006. I’ve said no since 2006. Now, this one time, I said ‘Yes’ on two conditions. First, a portion of the proceeds had to go to charity. Second, I wanted to kidnap Fred Savage. The second condition took some explaining…”

About the charity: $1 of every ticket sold will go to F* Cancer, a perfectly titled charity to benefit from Deadpool.

About the Fred Savage joke: If you’ve seen The Princess Bride, the following picture should be self-explanatory:

In reality, there’s a rather cunning have-cake-and-eat-it-too aspect to this. By producing both an R and PG-13 rated version of Deadpool 2, Fox now gets to try and push the new version of film past the Chinese censors, which has not yet allowed either of the Deadpool films into its theaters. At the same time, Fox is showing future bosses at Disney a possible future roadmap for the franchise. How can Deadpool possibly F-bomb his way into the land of Mickey and Minnie? By making a joke out of producing both R and PG-13 versions.

Not that Disney has been calling for such an approach, at least not publically. The studio behemoth that Iger built hasn’t released an R-Rated film since The Fifth Estate in 2013 and even that was mostly due to contractual obligations it couldn’t get out of. However, Iger as expressed an openness to keeping Deadpool in the R rated realm, telling investors earlier this year, “[Deadpool] clearly has been and will be Marvel branded. But we think there might be an opportunity for a Marvel-R brand for something like Deadpool. As long as we let the audiences know what’s coming, we think we can manage that fine.”

That’s all fine and good, but even with the massive financial successes enjoyed by Logan and the two Deadpool films we still ended up with a PG-13 version of Venom even though it’s a film in which the title character literally bites off human heads. Venom, of course, is a Sony property and has nothing to do with Disney, but it’s a canary in the coal mine for industry trends. It was reportedly made as an R-rated movie and then scrubbed down to a PG-13 in post due to the classical concerns about needing to reach as wide an audience as possible. The reward for those more fiscally cautious-members of the Sony suits who pushed for a PG-13 Venom has only been one of the bigger box office surprises of the year.

And now, as per the following Heroic Hollywood headline from yesterday, this: 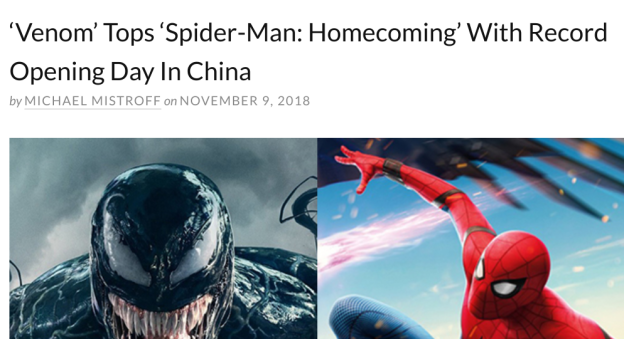 Venom, which currently sits at an impressive $545m worldwide, is now on pace for a $95m opening weekend in the world’s second-biggest film market. According to Forbes, a conservative estimate for its eventual total run in China would see it increasing its worldwide total by a third, helping propel it past Ant-Man and the Wasp and maybe even Deadpool 2 – pending what happens with Once Upon a Deadpool – on the year-end charts.

Compare all of that to the internet think piecing (basically, expanding into R will prolong the life of the superhero genre by allowing for more varied stories) and wild speculation (remember all the “WB to reshoot Suicide Squad into a hard R” rumors?) of two years ago which predicted Deadpool’s success would lead to a run of R-rated imitators. Given the realities of production schedules, if those imitators were in the offing the first ones would be here by now. Venom was almost that film, but then Sony blinked and have been massively rewarded for doing so. Now even Deadpool has somehow found a way to compromise into a younger audience-pleasing, China-pandering PG-13 alternative.

What is the rest of Hollywood to make of that? Sure, the R-rated horror movie has been having a prolonged day in the box office sun with It: Chapter 1 and the new Halloween breaking records, but the R-rated superhero movie might continue to be as rare as a genuine Bill Maher apology. 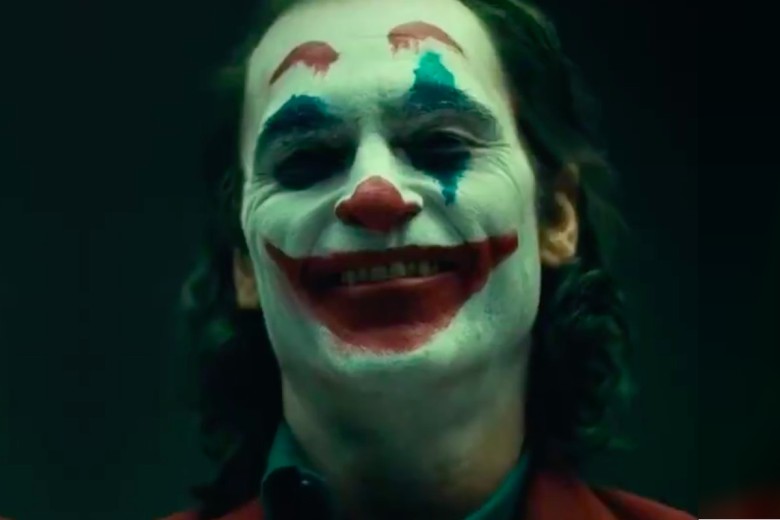 Todd Phillips’ Joaquin Phoenix Joker movie, for example, is said to be targeting an R-rating. Ditto for Todd McFarlane’s Spawn, though the last word on that has it possibly simply going straight to a streaming service instead of into theaters. WB’s Harley Quinn team-up film Birds of Prey is similarly gunning for an R.

So, it’s not like there isn’t any harder-edged content on the way. However, a lot of those decisions on a targeted rating were made before Venom’s PG-13-approved success. Now it’s a safe bet everyone at Marvel, Sony, Disney, WB, and, most obviously, Fox are watching the Once Upon a Deadpool experiment with great interest.

The predicted renaissance of superhero genre-expanding material leaving the sanitized trappings of an exclusively PG-13-rated world might just be on hold at the moment. At least on the big screen. Who knows what happens next there, but there’s always HBO’s Watchmen adaptation/re-interpretation to look forward to.

What do you think – is this a good or bad thing or too early to tell? Is a continued world of mostly PG-13 comic book movies preferable to a regrettable run of clueless R-rated Deadpool imitators? Let me know in the comments.