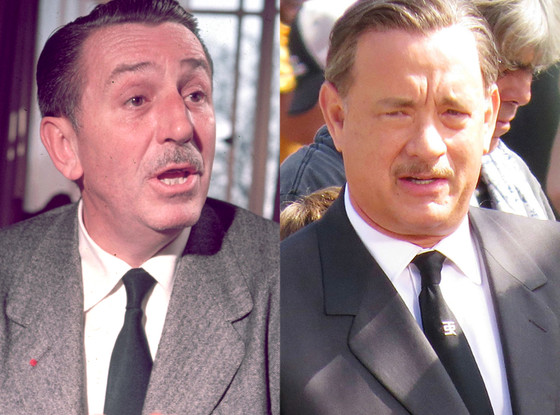 You know what’s a good movie?  Marry Poppins.  I know, I know.  That’s a bold statement on my part, acknowledging that a universally beloved classic like 1964’s Marry Poppins is indeed a good movie.

You what almost didn’t get made as a movie, though? Marry Poppins. Or at the very least that’s the angle being taken in Saving Mr. Banks, which proclaims to tell the untold story of the (un)making of Mary Poppins.

In Mr. Banks, Tom Hanks stars as Walt Disney and Emma Thomson as P.L. Travers, the author the Marry Poppins children’s book which was originally published in 1934.  The basic story is that in the 1960s Disney wanted to do, well, the Disney thing with the story and turn it into a live action film featuring nonsensical songs the masses would involuntarily hum as they left the theaters.  Travers, on the other hand, held the intellectual property rights meaning everything had to first go through her before the movie could happen.  Disney was ever so Disney about it (“But P.L., think about the children”), and Travers was ever so British about it (“Oh, poppycock, and don’t you dare ever again begin a sentence with a conjunction around me!”):

Watch these two forces collide in this newly released first trailer.  However, be warned that this trailer probably gives away a bit too much:

Looks pretty good, right?  Granted, it might end up seeming like as much of a commercial for Disney as The Internship was for Google, just more artistic and not as blatant.  However, the behind the scenes story of the making of Marry Poppins is a fascinating one which will surely delight the many fans of the film who may not know the misery that went into producing such joy.  Beyond that, they’ve clearly gone to pain-staking detail to recreate Disney Studios and Disneyland in all of its 1960s glory, which will certainly be a treat for the many Disney fans around the world.

Emma Thompson is the perfect choice to play Travers. Thompson played the rather Marry Poppins-esque character Nanny McPhee in two films, both of which featured scripts she herself adapted from Christianna Brand’s Nurse Mathilda books.  So, she has some serious experience in this area.  Of course, if none of that were true Thompson would be a great choice because, well, she’s Emma Thompson and nobody else is.

Joining Hanks and Thompson in the cast are Jason Schwartzman and B.J. Novack as the songwriters lending their supercalif…well, I’m not typing out the whole thing…touch to the would-be musical, Paul Giammati as Travers’ chauffeur, Colin Farrel as Travers’ father, and other recognizable faces like Bradley Whitford and Rachel Griffiths.

Also, I can’t resist – Saving Mr. Banks?  Starring Tom Hanks?  What the heck?  Did they finally save Private Ryan, and now this is a new anthology franchise in which Tom Hanks has to save various soldiers during times of war?  Is this one set during Vietnam, and “Mr. Banks” is the code name the military gives to Jane Fonda who has secretly been brainwashed by the Viet Cong to publicly side with them against America thus embarrassing her home country?

Okay.  Now, I want to see the real Saving Mr. Banks as well as my fictional version of it because that last one sounds like the worst movie I will impulsively watch from beginning to end.  However, the title is actually a reference to the father character in the Marry Poppins book, a character who we will learn is based upon Travers’ actual father (who was not a particularly nice man).

Saving Mr. Banks is due for a limited release on December 13 before opening wide a week later on December 20.  That other Saving Mr. Banks with Jane Fonda I described?  That will have an exclusive engagement in my mind before branching out to forgotten/bad jokes-land.

You there – in the back.  Yes, you.  The one who’s been real quiet the entire time you’ve been reading this article – do you mean to tell me that you’ve never seen and/or heard of Marry Poppins.  For shame, sir/madame.  For shame!  Rectify that soon.  Here’s a good start with a clip from the movie: