WB/DC has their Wonder Woman, and she will indeed appear in Batman v. Superman: Dawn of Justice.  Director Zack Snyder confirmed as much today, releasing the following statement (via Variety):

“Wonder Woman is arguably one of the most powerful female characters of all time and a fan favorite in the DC Universe. Not only is Gal Gadot an amazing actress, but she also has that magical quality that makes her perfect for the role. We look forward to audiences discovering Gal in the first feature film incarnation of this beloved character.”

Where did this come from?

WB/DC has been attempting to develop a Wonder Woman film or TV show for quite some time now. Most notably, a pre-Avengers Joss Whedon worked for years on a Wonder Woman script that sounded a lot like what Marvel ended up doing with Thor. In the past two years, there were separate attempts to adapt Wonder Woman to TV, first in David E. Kelley’s ill-fated pilot

Then the CW developed a Smallville-like Wonder Woman prequel, working title Amazon, but it never advanced to the pilot stage.

Thanks to the recent success of female-led films like Hunger Games, The Heat and Gravity, the higher-ups at WB and DC Entertainment. WB CEO Kevin Tsujihara succinctly told The Hollywood Reporter, “We need to get Wonder Woman on the big screen or TV.” DC Entertainment President Diane Nielsen elaborated even further:

“We have to get her right, we have to. She is such an icon for both genders and all ages and for people who love the original TV show and people who read the comics now. I think one of the biggest challenges at the company is getting that right on any size screen. The reasons why are probably pretty subjective: She doesn’t have the single, clear, compelling story that everyone knows and recognizes. There are lots of facets to ‘Wonder Woman,’ and I think the key is, how do you get the right facet for that right medium? What you do in TV has to be different than what you do in features. She has been, since I started, one of the top three priorities for DC and for Warner Bros. We are still trying right now, but she’s tricky.” Over the past month, Olga Kurylenko (Quantum of Solace, Oblivion) and Elodie Young (G.I. Joe: Retaliation) reportedly read for a mysterious strong female character in Batman Vs. Superman.  At the same time, Jaimie Alexander, aka Lady Sif from the Thor films, was said to have taken multiple meetings with WB.

What was this all about – a love interest for Ben Affleck’s Bruce Wayne, perhaps?  Maybe, but the rumor mill argued the role in question was Wonder Woman. Kurylenko and Young likely read for the role while speculation has it that Alexander’s stated love of the character and genuine high comic book IQ meant WB simply brought her in as a consultant. After all, Kurylenko, Young, and Gadot are all foreign born actresses with almost identical builds and exotic looks meaning they fit the exact same casting profile. The South Carolina-born Alexander doesn’t exactly match that profile, even if among the group she clearly most closely resembles the traditional image of Wonder Woman.

Obviously, Gadot won the big casting call. Step aside Lynda Carter; we have a new Wonder Woman, but…

Who the heck is Gal Gadot?

According to IMDB and Wikipedia, Gadot is a 28-year-old Israeli model and actress most known for having starred as Gisele in the past three Fast & Furious films (Fast & Furious, Fast Five, Fast & Furious 6).  Here’s Gadot talking about the strong feminine roles in Fast & Furious:

Prior to acting, Gadot grew up in Israel, winning the Miss Israel competition at the age of 19 in 2004 before going on to be a Miss Universe contestant.

We get it – she’s apparently one of the most attractive women in the entire universe. That’s great, but Wonder Woman is a freakin’ Amazon warrior, a fierce fighter, an aspect which has been heavily emphasized in the New 52 re-boot. Was she honing her fighting skills on those Miss Universe runways?

Well, Gadot hasn’t sliced any marauders in half – that we know of – but she actually served in the Israeli army for 2 years, serving as a sports trainer in the army while also still working as a professional model.  She’s also a mother, bearing her first child with her husband in 2011.

To sum up, Wonder Woman is supposed to be a bastion of femininity. The actress they picked to play her is an objectively gorgeous mother and soldier who has held her own on-screen against the likes of Vin Diesel, Dwayne “The Rock” Johnson and the late Paul Walker. She may not instantly look like our image of Wonder Woman, but she sounds kind of wonderful in every other way.

No, but it has nothing to do with Gal Gadot.  Well, maybe a little. It was so much easier to imagine Jaimie Alexander as Wonder Woman:

The bigger concern, though is not who is playing Wonder Woman or the amount of screen time she’ll receive but instead who is making this movie. We are talking about Wonder Woman making her debut in a Zack Snyder movie. The Sucker Punch guy?

To make a character like Wonder Woman work, you need levity to make her sympathetic and relatable. She’s a freakin’ warrior princess who was either molded from clay or is the bastard daughter of Zeus (depending on which continuity you follow).  She has a lasso of truth, an invisible plane, and a tiara which can be thrown like a boomerang; Thor just had the hammer.  That’s not even mentioning the challenge of translating her entirely impractical and revealing costume to the screen.

This requires a nuanced approach, which is not Snyder’s forte.  You could cynically argue Wonder Woman is but another super-powered, god-like figure which Snyder can use to bash bad guys through skyscrapers.  She’ll probably look amazing – we just won’t care about her.

I extend that to pretty much all of Snyder’s work as he comes off as a great visual effects guy/production designer who’s somehow ended up as a director. You can’t really argue his bonafides as a visual filmmaker, but it’s always an oddly cold, emotionless affair.  io9’s Charlie Jane Anders took it one further and looked at his consistent failures with female characters:

“Snyder has a problem with capturing real emotions, as opposed to surfaces, something the cold and depthless Man of Steel confirms. And he especially has a problem with female characters, because his love for pulp imagery leads him to explore women as fetish objects. It almost doesn’t matter if, as some have discussed, Snyder is trying to turn this fetishization on its head or show how it’s harmful — it still tends to dominate.”

Pulling off Wonder Woman on screen will be incredibly challenging. Even if they copy Thor, Wonder Woman doesn’t have a Loki-like figure lying around to play off of. They are at least trying, but our faith in their ability to pull it off is remarkably low.  It’s been said the only person who could actually make a comic book movie focused on a female character work is Joss Whedon. DC had their chance with him.  He’s not available anymore.  However, surely this can be done by someone other than Whedon.

We won’t find that out for a while as Wonder Woman will most likely be but a minor presence in Batman Vs. Superman.  However, Batman Vs. Superman is starting to gain an alarming X-Men: First Class vibe.  That film was the combination of two separate projects Fox had put into development, ultimately deciding to cut their losses and combine their Magneto origin story and X-Men prequel into one movie.  The result was a rushed production that at least hit jackpot with casting and the Magneto part of the story.  Batman Vs. Superman is starting to take the shape of a Batman/Superman team-up combined with an origin story for the Justice League.  A colossal match-up like Batman and Superman shouldn’t need anything extra.

Straight from Comic-Con (or, technically, Zack Snyder’s Twitter Account), here is the first image of Gal Gadot in full Wonder Woman costume in Batman Vs. Superman: 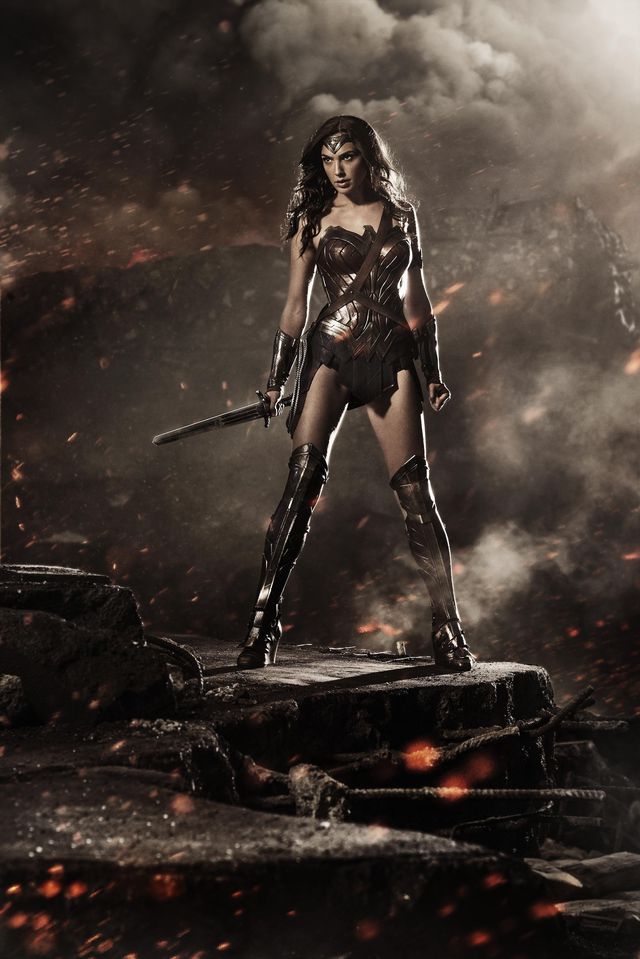 What do you think?  Should we just delight for one moment in the fact that Wonder Woman is actually going to be in a movie?  Or are there enough things here to seriously temper enthusiasm?  And does Gadot look anything like how you pictured Wonder Woman?  Let us know in the comments.