We’ve already gone on the record as objecting to Zack Snyder being the director to bring Wonder Woman to the screen as has FilmSchoolRejects, but we have no real problem with the casting of Gal Gadot.  She’s our new Wonder Woman.  Lynda Carter was so 1970s.  We’ve moved on.  The modern Wonder Woman will be less voluptuous, more athletic, and rather international in appearance.  She’ll also apparently be around for a while.  Israel’s top news program Good Evening with Gail Pines revealed Israeli-born Gadot’s multi-picture deal with Warner Bros. will comprise 3 films.  Variety is now citing trusted inside sources in reporting Gadot’s three films include Batman Vs. Superman (aka Man of Steel 2), a Justice League film, and a solo Wonder Woman film, listed in the order in which they will be produced.

No.  This is just what studios do nowadays.  Well, technically, this type of deal is just an evolution of the Old Hollywood studio system where actors would be contracted as exclusives to specific studios for years.  The government made them stop doing that.  So, the exclusive thing is out, but now actors regularly sign up for a film and multiple sequels.  The studios like to do it with unknown or unproven actors so they can lowball them on salary.  Marvel is notorious for signing all of their actors, leads and supporting, to multi-picture deals.  Even that little kid (Ty Simpkins) from Iron Man 3 got one.  WB is doing it, too.  Henry Cavill and Amy Adams are believed to have signed multi-picture deals when they were cast as Superman and Lois Lane in Man of Steel, and Ben Affleck scored a huge multi-pic deal when agreeing to become the new Batman.

What the studios don’t like is when the multi-pic deal expires, and then you have something like Robert Downey, Jr. getting to dictate terms to Marvel this past summer.

Even though it’s relatively standard not all stars actually get multi-picture deals.  WB giving one to Gal Gadot is at least kind of a vote of confidence in her.  Plus, it makes Wonder Woman the only female superhero with her own film on the horizon.  The last such film was Halle Berry’s 2004 crap-fest Catwoman, which did at least suck so hard Berry actually showed up at the Razzies that year to accept her awards.  Her hilarious, bridge-burning speech in which she shared the blame with her agent, studio, director, and fellow actors has to be seen:

Right now, hearing that WB will make a Wonder Woman after Batman Vs. Superman and Justice League seems at least a little significant, even if most of us had already guessed as much.  The problem is that rumors have been firing up over the past 2 years, particularly over the summer, that Marvel is developing their own female superhero film centered around Carol “Captain Marvel” Danvers.  If this Wonder Woman movie won’t happen until after both Batman Vs. Superman (2016) and a Justice League film (likely 2017/2018 release) we’re looking at the end of the decade before we see this thing.  Marvel will have most likely easily beaten WB to the bunch with their own female superhero film by then.

No.  Well, at least not yet.  Why?  Here’s a list of other actors believed (studios rarely ever actually offer a confirmation) to have signed multi-picture deals specific to a character/franchise:

Still waiting on those sequels.  This list could go on and on and on.  The point is that for Gal Gadot’s multi-picture deal to be worth a darn they’ve got to first get Batman Vs. Superman right.  They just pushed it back 10 months.  No matter what they do they’ll have a big opening weekend as the combined pull of Batman and Superman will be to big to resist.  However, their budget is going to be huge, and people will actually have to like this thing (i.e., it’s need to be a good movie) to make enough money to help kick in Justice League and Wonder Woman.

Could Gal Gadot ultimately get screwed by this deal?  Here’s what one time Johnny Storm, current Captain America Chris Evans told comicbookmovie.com about the danger of multi-picture deals in 2010 when discussing his then-new film The Losers: 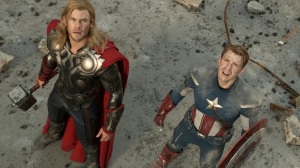 Q: Are you a little nervous when you sign onto something that might be a multi-picture kind of thing?

Evans: Well, that’s the problem. You think they’d only make it if it’s good. The problem is they only make it if it makes money and that’s good and making money are not synonymous. That’s why you avoid those multi-picture contracts. Sometimes you have to do it, you known, movies like “Fantastic Four,” those massive movies. They say, look if you don’t want to sign a multi-picture contract we’ll find somebody else. Movies like this you can negotiate. I think most actors would avoid trying to do multi-picture contracts just because you never want to have your arm twisted in any way. Even if it’s a fantastic movie, even if you can’t wait to make the sequel it’s just always better in any respect, in any aspect of life to not be forced to have to do something.

Q: How does it work, exactly, when you sign on for a multi-picture deal?

Evans: Yeah, like it’ll be a studio deal so, you know if you had a 3-picture deal for “Fantastic Four” for example, let’s say they didn’t want to make another “Fantastic Four,” Fox could say well, we got you for another movie. We can put you in any movie we want to put you in. And it’s more about locking you in at a price for each picture they say we’ll pay you this for number 1, this for number 2, this for number 3. So “Fantastic Four,” let’s say they didn’t want to make a sequel, but for some reason one of the actors became quite famous off of it, Fox now has the advantage to take that actor and put them in another movie at a set price. That actor can’t say well now that I’m enormously famous I want $10 million. You could say well, we got you in a 3-picture deal and we got you locked in at this much cheaper price and you’ve got to do it. So it doesn’t always have to be. But I don’t have a 3-picture deal so it doesn’t even matter. If I did, though and “Losers” went away, they could put me in another movie at a set price.

Q: Is that risky for you as an actor?

Evans: To get locked into a 3-picture deal? Well, you know like I said you lose control and the problem is let’s say you have a terrible experience on a film. Let’s say you don’t want to revisit the character. Let’s say you don’t like the new director they hired. Let’s say – there’s a million elements that could come into play where you’re just out of the driver’s seat. It’s not a bad thing. You’re working. The fact is, especially nowadays as an actor, you’re lucky to even be working. I know so many amazing actors who aren’t working because there’s not a lot of work. So, I guess it’s not the worst problem to have to be forced to go to work, but if you want to try and maintain creative integrity it’s just you lose that control.

That’s all in the future.  For now, Gadot’s probably just ecstatic to have gotten the part.

Batman Vs. Superman (official title pending) is currently scheduled to come out May 6, 2016.  Henry Cavill, Amy Adams, Diane Lane, and Laurence Fishbourne are all returning, joined by Ben Affleck as Batman and Gal Gadot as Wonder Woman.   Zack Snyder will again direct, this time from a script by David S. Goyer and Chris Terrior.  It will be filmed predominantly in Detroit, Michigan, with an in-state budget of $130 million though its total budget incorporating out-of-state shooting and post-production is unknown.