It seems like it was only yesterday that Zack Snyder stunned Comic-Con audiences by having Harry Lennix read an iconic passage from Frank Miller’s The Dark Knight Returns as a way of announcing that the assumed Man of Steel sequel would actually be a Batman/Superman team-up. Yet here we are just over a month away from the unfortunately titled Batman v Superman: Dawn of Justice, and WB saw fit to release the final full trailer this morning. I guess those Turkish Airlines Super Bowl commercials didn’t cut it.

The initial teaser was overly serious and appeared to be lifted straight out of Batman: Arkham City.  For the non-Frank Miller aware, it probably inspired lots of questions like, “Why are Batman and Superman so mad at each other? Aren’t they [wait for it] Super Friends?”

The first full trailer was all dramatic music, 9/11 imagery and Jesse Eisenberg chanting, “The red capes are coming.”  There was even Ma Kent sounding like a Total Recall villain when she more or less told her son, “You don’t owe this world anything. All those people in peril can just die.” In the balance, this was more Superman’s trailer than anyone else’s, showcasing his seperate standoffs with a congressional committee and Batman, his growing unease with the way some humans worship him as a god and his longing for moral direction from his mother and Lois Lane. 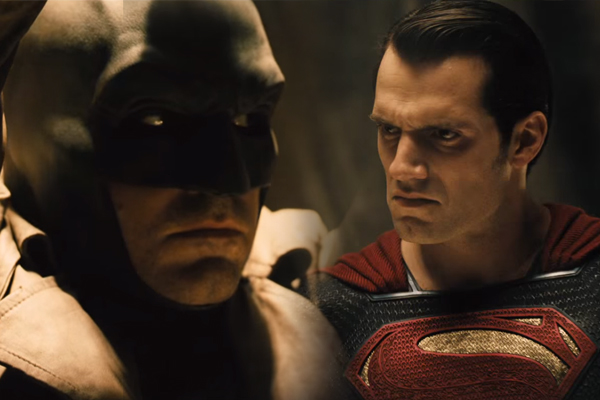 A 50-second scene featuring Batman battling a tyrannical Superman was so over-the-top intense that everyone assumed it must actually be a dream sequence representing Bruce Wayne’s worst nightmare and not some incredibly arch moment taking its cues from Injustice: Gods Among Us.

The next trailer sought to lighten the mood by showcasing Jesse Eisenberg’s surprisingly fay performance as Lex Luthor, interrupting a Clark Kent/Bruce Wayne stare down with a gleeful, “I just love bringing people together. [Shaking Clark’s hand]. Ow, wow. That is a good grip. You should not pick a fight with this person.” We also got our first glimpse of Wonder Woman in action, stepping in front of an energy to save Batman’s ass who assumed she was there with Superman. There was also confirmation that once Batman and Superman fail to kill each other Lex moves forward with Plan B: a genetically engineered Kryptonian monster which is probably supposed to be this movie’s version of Doomsday. While there was plenty of screentime for both Batman and Superman, this was Lex Luthor’s trailer.

Now it’s Batman’s turn to get his own trailer. If you saw no other footage from this film beyond this trailer you’d assume Batman v Superman is really just a Batman movie with an extended cameo from the Big Blue Boy Scout. The opening sequence is a fight scene which would make the Arkham video game makers proud.  Afterwards, Bruce laments his advancing age in a chat with the Jeremy Irons’ Alfred before declaring war on Superman because if there’s even just a 1% chance that they’re right about him being a threat to the entire planet they have to do everything to stop him.

It looks like he’ll be utterly embarrassed in his first confrontation with Superman before returning for a second round in a robot suit which will at the very least help him deflect one punch, much to Superman’s surprise since he gives him a confused “People usually fall down when I punch them” look. Plus, in his civilian life as Bruce Wayne he’ll meet Wonder Woman in her civilian guise as Diana, and as Batman he’ll watch her kick some ass as Wonder Woman.

At this point, I don’t know what more there is to say about this movie that hasn’t already been said. It looks like a Zack Snyder movie, way more so than even Man of Steel did. It will be an incredibly dark movie, and I mean that literally. Ben Affleck is probably doing a better job with Batman than he did with Daredevil, but that’s not saying a whole lot and there’s still something about his performance which just seems off. Henry Cavill and Amy Adams seem like they would have been better off getting their own proper Superman sequel. Gal Gadot’s Wonder Woman threatens to steal the whole thing out from under everyone possibly just because what Batman and Superman are working through doesn’t seem as interesting as the movie thinks it is.

But it’s Batman and Superman. Of course I’ll see it.

We’ll have to wait and find that last one out when Batman v Superman: Dawn of Justice comes out March 22, 2016.